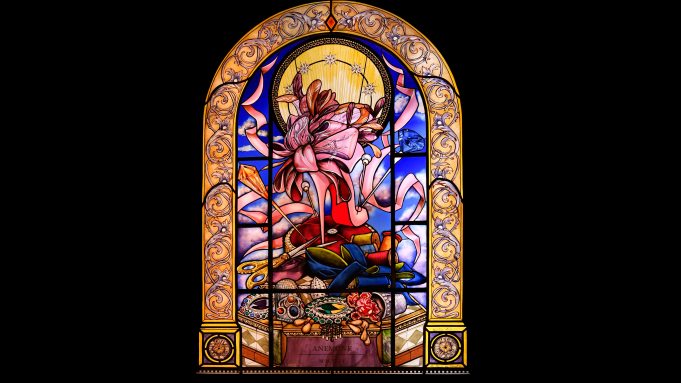 While he surely didn’t intend it as such, Christian Louboutin’s new exhibition in Paris is something of a manifesto for cultural appreciation, and an eloquent riposte to those who prefer to cry cultural appropriation.

“It’s so important to be interested in other people’s cultures,” Louboutin said as a hypnotic film by New Zealand artist Lisa Reihana — meant to be a wordless biography of the French designer — unfurled scenes of Egypt, Portugal and Bhutan, interspersed with killer shoes. “I would die if I wasn’t nourished by other people’s cultures…. It’s the beginning of tolerance to be open to other civilizations.”

The exhibition that opens Feb. 26 at the Palais de la Porte Dorée, smack in Louboutin’s childhood neighborhood, shows how this Art Deco masterpiece ignited his passion for travel, the decorative arts — and shoe design.

Constructed for an exposition in 1931 dedicated to France’s colonial possessions, and then home to a succession of ethnological museums, it currently houses an immigration museum and a tropical aquarium.

You can almost imagine Louboutin at age 10 gazing in awe at the hulking building’s ornamental splendor, its door handles made of jutting horns that evoked the wonder of Africa, and then encountering near the entrance the first drawing of a shoe he ever laid eyes on — a women’s pump with a big red X through it, for high heels were forbidden to tread on the delicate mosaics and parquet floors.

Asked if his extraordinary career as a stiletto king could be considered the ultimate revenge to that warning sign, he replied: “I guess so!”

Louboutin started drawing shoes at age 12, and began as an intern for the Folies Bergères and Charles Jourdan, then a supplier to Christian Dior. He was the personal assistant to Roger Vivier before he hung out his own shingle in Paris in 1991.

With Nordstrom as the lead sponsor and Olivier Gabet, director of the Musée des Arts Décoratifs in Paris, as curator, the exhibition — as sumptuous as it is slyly humorous — is divided into 11 thematic sections, with the first dedicated to Louboutin’s early years.

In a darkened room framed by bespoke stained-glass windows that exalt shoes and the decorative arts in equal measure, it’s clear that Louboutin was an innovator with range from the get-go. Among his first designs were flats he made with Princess Diana in mind — LO on the left shoe and VE on the right one — and low denim boots with a reverse cuff. Unusual designs include pant boots from 1995 and sock boots from 2000, the latter initially made with hosiery purchased from Hackett.

Asked if he was conscious of displaying too many high heels in an age of sneaker mania, Louboutin said the exhibition should “put things in perspective. I love heels and I will always love heels, but the spectrum of my work is not only heels. …I’ve always designed flat shoes and I don’t think that heels are the only possibility to look feminine.”

He allowed that sketching heels, however, gives him great pleasure. “My drawing is curves. I’m not an angle person, I’m more of a round person,” he said.

Visitors should certainly leave with an appreciation for the painstaking craft that goes into his shoes, and for the symbols, references and meaning embedded in them. “Out of a small object, you have a lot of things going on,” Louboutin said during a tour on Monday. “I’ve always loved small artworks and sculptures, and this exhibition shows that there’s as much detail, as much thought and as much work that goes into a small object as a big one.”

The “atelier” room is sure to be a hit, showing what goes into realizing a satin pump with crystal embellishments. Videos explain the process, and star a tiny Louboutin in a red suit doing his best Charlie Chaplin, scribbling his designs with a giant pencil on a last twice his height and carting wheelbarrows of crystals for a craftsman to glue on, one by one.

Louboutin’s reputation for racy, almost fetishistic shoes recurs several times. Look carefully at the upholstery and carpeting in a display of a typical English grandma’s living room and you might blush: It’s even kinkier than the spiky, shiny or corset-laced black shoes displayed on shelves and in cabinets. More blatant are photos by David Lynch from a 2007 collaboration mingling flesh and the highest heels possible, hung in a long, dungeon-like corridor.

“People consider my work sexy. It’s not in my head, it’s just the way it is,” Louboutin shrugged.

Interspersed with some 200 pairs of shoes are artworks and eclectic objects from private collectors, major institutions and Louboutin’s own horde, from Mae West’s platforms bearing a Saks Fifth Avenue label and a feathered cape worn by Marlene Dietrich to found objects including stones and pyrite. “There’s something about minerals I love. It’s something super sophisticated, but it’s natural,” Louboutin enthused.

The designer handpicked an array of paintings, photographs, ceramics, crowns, masks, jewelry — and even shoes by Pierre Hardy and Vivier — for the “imaginary museum” that ends the show. “I love artisans as much as I love art,” he said.

His inspirations and references are shown without any of his shoe designs. “So people can see the relation with my work, or not. If you don’t see, it’s perfectly OK,” he said.

Inside a Bhutanese theater, visitors can take in a hologram of burlesque performer Dita Von Teese vamping it up, and another of football freestyler Iya Traoré doing his fancy footwork. Flanking the rows of seating are cases of feathered shoes made for the Folies Bergère and for a variety of famous folks, including Prince and Michael Jackson.

Other celebrities wearing Louboutin are celebrated in a bright corridor or red scaffolding, including Leonardo DiCaprio propping his Oscar on the floor between his laceups, and Kristin Stewart doffing her heels to mount the red steps at the Cannes Film Festival.

Louboutin stressed he’s not bothered in the least to show famous people taking off his shoes, pointing to Emma Thompson at the podium of an awards show — clutching a martini in one hand, black Louboutin pumps in the other.

“Removing shoes — it’s a show in itself,” he said with a grin.

Visitors exit through a gift shop featuring a range of books and souvenirs, including Louboutin scarves, tableware and cross-stitch kits.