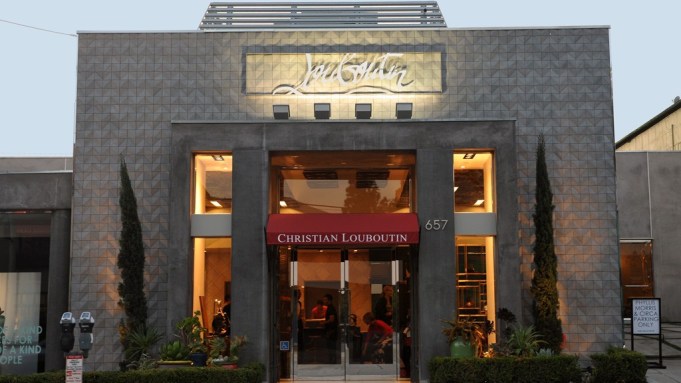 Christian Louboutin is on a well-heeled retail march across the globe.

This month, the Paris-based brand is opening men’s stores in Los Angeles and London and dual-gender stores in Chicago and São Paulo, Brazil. The new stores are indicative of the company’s strategy to grow its retail presence that has resulted in the number of units increasing from 17 in 2009 to roughly 65 today, and retail contributing half the brand’s revenues.

“A store gives us much better opportunity to present not only the collection, but also the brand the way Christian wants to express it,” said Alexis Mourot, chief operating officer and general manager of Christian Louboutin. “Every time we open a store, not only do we gain customers, but we service the existing customer base more. Most of the time, the business doesn’t go down in department stores. Usually, the market goes up.”

The men’s stores have been somewhat of a revelation for Louboutin. Originally men’s styles were personal gifts that Louboutin made for friends, but he began to detect men wanted to enjoy shopping like the women in their lives. The brand launched a men’s collection in 2010 before entering men’s retail with the first men’s store worldwide in Paris in September 2011 and the first men’s store in the U.S. in New York in August.

“When men come to my men’s store for men’s shoes, they are not coming with the idea of getting a leather shoe they are going to keep forever and give to their son. They are coming for the excitement,” said Louboutin. “There was this idea that men have been completely different from women in the way they were approaching shoes, but now there is this type of guy, who is not necessarily gay, funny enough, that really wants to shop like a woman.”

Louboutin has been surprised by how quickly men’s retail has caught on. Mourot said men’s is less than 10 percent of the overall business but is on track to hit 20 percent in coming years. “When we first opened the men’s store in Paris it was in August, and Paris is not a city which is very alive in August. There was not even a soft opening. It just opened the day it was ready, but the incredible part was that it became really packed literally the first day. We didn’t know what was happening. We thought it was an accident and it would slow down, but it hasn’t slowed down for more than a year,” said Louboutin.

Apparently, Louboutin’s male shopper isn’t shy about fashion. “There is nothing too embellished and no price range,” said Louboutin. “My first surprise was to have sneakers completely covered in black crystals gone. Everything which is highly embellished and embroidered, gone. There hasn’t been any limit.”

Designed with New York firm 212box, which the brand has tapped for its dual-gender stores as well, Louboutin described the men’s stores as inspired by apartments of men who travel extensively and collect objects along the way. One such object is the rug decorating the floor embroidered to look like tiger skins by Jean-François Lesage. In keeping with the masculine theme, stores feature diamond-paneled leather walls, red carpet in a shade deeper than the usual Louboutin red and a so-called Tattoo Parlor, where customers starting this holiday season will be able to replicate their personal tattoos on shoes.

Speaking about the materials selected for the men’s stores, Eric Clough, principal designer at 212box, said, “We really tried to use every leather process a shoemaker would use — with textures varying from lambskin to rawhide.”

In both men’s and women’s, Louboutin stores have been experiencing comparable-store sales increases in the single to double digits this year, according to Mourot. Responsible for 40 percent of the brand’s business, the U.S. remains a dominant sales driver, although its percentage of total sales has shrunk as Louboutin has spread worldwide. This fiscal year, which ends in August, the brand expects to open 14 to 15 stores, including three or four men’s stores. Privately owned Louboutin has annual sales volume of over $300 million.

On top of its Los Angeles, London and Chicago stores bowing this month, Louboutin is opening a 330-square-foot boutique (most of the brand’s stores average 1,500 square feet) at the JK Iguatemi shopping center in São Paulo, its third in the country. After that store, Mourot doesn’t anticipate additional retail in Brazil.