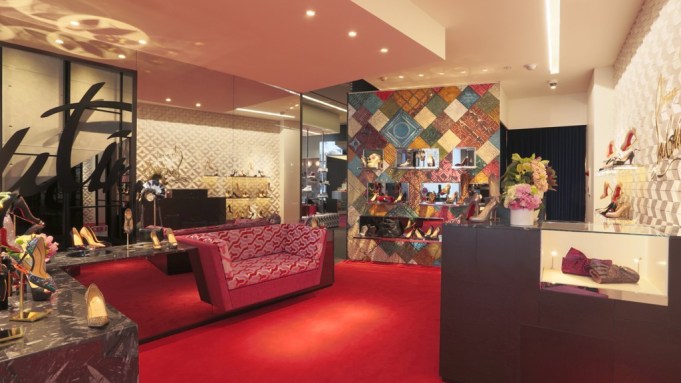 TOKYO — Christian Louboutin was strolling the streets of this city in a pair of his own black, white and purple brogues with calf hair accents, when a couple of guys stopped to ask him something. They did not speak English so the designer struggled for a moment with the language barrier but soon figured out what they were asking.

“I could see it was about the address of the shoe,” he said of his encounter. The designer now has a new address in which to direct interested parties: his latest Tokyo flagship, which gives him a presence in the trendy Aoyama neighborhood as well as a new home base for his fast-growing Japanese business.

Louboutin hosted a party last week to fete the store, which opened to the public Dec. 11. The 2,411-square-foot boutique occupies a space formerly inhabited by Neil Barrett’s Zaha Hadid-designed flagship.

Louboutin, who travels to Japan about once a year, has cultivated an appreciation for the country’s culture and its meticulous attention to detail. He made a point to incorporate his knowledge into the design of the store but in a subtle way. The store, which he designed with New York-based 212box, features textured stonework simulating the look of origami folds. A semitransparent black glass mural serves as a nod to Japanese lacquer. “A take on Japanese culture but definitely…through the filter of my brain,” he said, explaining that famed Japanese author Junichiro Tanizaki’s seminal text on Japanese aesthetics “In Praise of Shadows” influenced him significantly. “It’s a very deep and funny book about the fundamental different ideas of Japanese culture. And after reading that book, a lot of things got explained to me.”

The store’s interiors also incorporate a patchwork of colorful tiles sourced from New England, as well as stainless steel shelving units and counters of fossilized stone.

The designer, clad in a rust-hued suit and gold-toed wing tips, said he identifies with Japanese people’s appreciation for fine details and their contemplative approach to life.

“I mean if you see…Japanese gardens, it’s very contemplative. People look at the garden, contemplate the garden almost more then they actually go inside some gardens,” he said, adding that some Japanese people apply the same mind-set to shopping. “A lot of people are buying the thing and they may not even wear it but they look at it. So it’s not to consume it or to have it as an item that one has to have but it’s really to contemplate it.”

Alexis Mourot, Christian Louboutin’s group operating officer and general manager, said the brand has posted “strong double-digit” growth in Japan over the past few years, even in like-for-like terms.

“I think the Japanese consumer is so savvy about details and hand-crafting,” he said.

Mourot declined to release sales figures for the privately-held company but said Japan represents 10 percent of the business. The U.S. and Europe account for 42 percent and 35 percent respectively. Asia, excluding Japan, makes up 10 percent of sales and other countries account for the remaining 3 percent. The executive said the company is seeing growth across the board in all markets.

Over the past three years, the company’s directly-operated Japanese subsidiary has opened seven stores, including the Aoyama and Ginza flagships. Mourot said the brand plans to add a location in Yokohama’s Sogo department store next year. The second level of the Aoyama store will serve as the brand’s headquarters and showroom in Japan.

Mourot said the brand’s men’s business is growing considerably, albeit on a smaller comparative base than women’s. To reflect that trend, the Aoyama store dedicates a bigger space to men’s footwear and accessories than other Christian Louboutin boutiques. Louboutin said he hopes to replicate that men’s and women’s balance in future stores.

“The men’s line is getting very important,” Louboutin said.