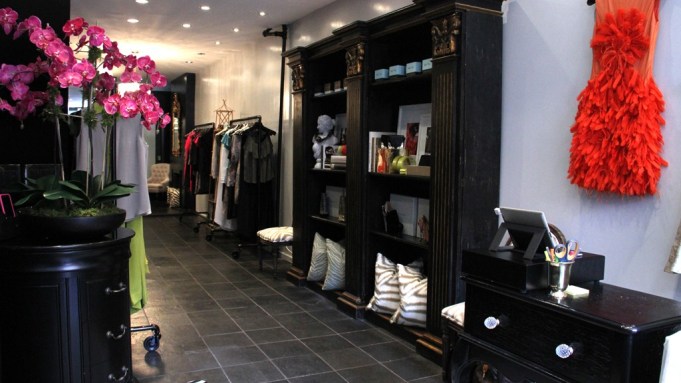 The winner of “Project Runway’s” fourth season, Siriano is trying to distance himself ever so slightly from the red-carpet gowns he is known for to focus on sportswear. “I want people to be introduced to the sportswear and separates I do in my collection every season,” said the 26-year-old designer. “I didn’t want the main focus to be on evening.”

Siriano, who sells his evening gowns to Neiman Marcus and bridal to Nordstrom, said he will be selling the sportswear to all of his accounts.

The store opened quietly last week and will officially bow on Sept. 5. Siriano will show his ninth ready-to-wear collection on Sept. 8 during New York Fashion Week and plans to host an event in his store for Fashion’s Night Out on Sept. 6.

With an entire wall painted black, dark slate floors, antique étagères and a large Jenna Snyder Phillips nude in a heavy gold frame, the store speaks to the designer’s serious intentions. “My goal is to open more stores,” Siriano said. “This is a test store. It will have a lot of exclusive items.”

In addition to rtw, special pieces include a pleated organza skirt with maribou feathers and handmade fabric flowers, $480, and a fuchsia dress, $850. Siriano said prices in the store range from $120 for a silk blouse to $2,000 for a gown. Shoes from Siriano’s collection for Payless, now in its fifth year, are on display. “I do four collections a year and have another few seasons with them,” he said. “[Payless] does runway versions of my designs such as boots with gold metallic fabric and faux snakeskin and black suede booties.”

Siriano designed clutches and wallets to complement the shoes. He’s also expanding into home items such as pillows and upholstered furniture.

“I’m hoping to do jewelry for the next collection,” he said, noting that it will be priced for less than $200.

Siriano has by all accounts had a charmed career. After winning the “Runway” title, he embarked on designing his collection, which was picked up by Saks Fifth Avenue in its second season. ‘“Project Runway’ is a burden in a way and such a great thing as well,” he said. “Who doesn’t want a few built-in fans? Those fans want something to buy and in the beginning that’s hard.”

Along the way, Siriano has attracted clients such as Sarah Jessica Parker and “Runway” host Heidi Klum. “I’ve dressed Heidi a lot and she treats me as a working designer,” Siriano said. “She was a tough critic to impress [on the show] and is harder to impress now.”