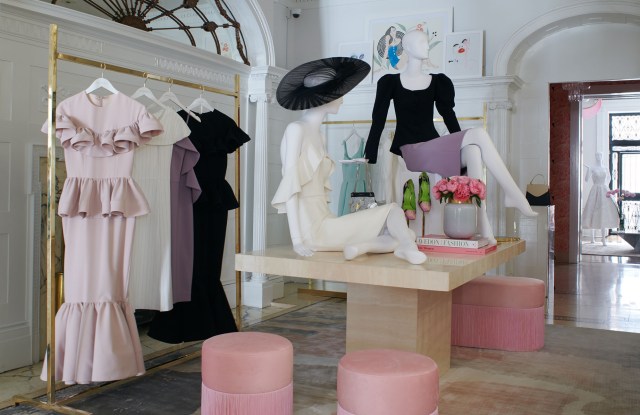 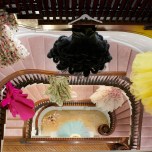 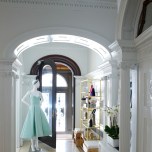 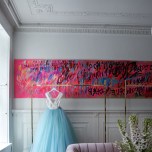 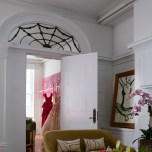 The retail space spans 1,500 square feet on each floor.

“It’s not massive, but it’s a great space; the architecture is unreal. It really feels like a different world for us,” Siriano said about the leased building. A previous store on Elizabeth Street in New York, which Siriano had for three years, closed a year and a half ago so the company could focus all its energies on one location.

In explaining the concept behind the multibrand store, Siriano said, “I really wanted to create a mini-department store. If you come in to shop for a beautiful Christian Siriano dress, what else can go with it that looks amazing? I don’t do jewelry so I wanted to partner with great jewelry brands, I don’t do certain accessories like hats, so I wanted to partner with this amazing couture milliner from Spain. Things like that complement the clothes but also are special.”

Siriano projects that the store will generate about $2 million in the first year.

The concept store will also display furniture and decor from Todd Merrill, Kelly Wearstler, Boutique of Spain, Milo Baughman, John Dickinson and Douglas Homer, as well as showcase vintage pieces from the Sixties and Seventies.

The decor is mid-century meets Twenties glamour, with a pink, gray, white and cream color palette.

Upstairs the shop will feature high-end clothing, such as eveningwear and gowns, and the more expensive jewelry. Dressing rooms are mainly on the first floor. “We did that so people could go through the whole space,” he said. There’s a full staircase connecting the two floors. He said that when celebrities come in for fittings, they will go to the showroom, which is in a separate area on the second floor, which is closed off. A bridal department is by appointment only.

Siriano’s staff will run the business operation. Each of the brands rents their space and chooses their own product, based on their customers’ needs and wants from season to season. “That’s a huge part of this and why the industry is having challenges. The buyers [at other stores] are not on the retail floor and not seeing what the customer is looking for,” he said. Select pieces from travel and lifestyle brand Objectifs, books published by Rizzoli and pieces by artists Ewa Budka and Rebecca Russo round out the offerings.

Each of the designers has different financial arrangements. Some are consignment based and others are leasing the space and pay a fee. “Everybody works in different ways depending on the brand and what they can do. Everybody is on board for a year, and we’ll see how it goes. Maybe we’ll bring on new brands or change it out after a year or two. It leaves a lot of opportunity to do new things,” Siriano said.

The shop will offer same-day deliveries within New York and will feature a full pastry and coffee bar in the back garden, called Joye & Rose Café, named after Siriano’s mother and grandmother. This summer, it will open a restaurant on the rooftop, called The Kind Life Café, overseen by actress and animal activist Alicia Silverstone, who has written two cookbooks on vegan dining. The restaurant will be offering a full lunch/brunch menu and will be open from the summer through October.

Siriano said he doesn’t sell Saks Fifth Avenue or Bergdorf Goodman (he sells Neiman Marcus), so he was happy to put himself smack in between those two major retailers. He said that’s one of the reasons the Fifth Avenue location worked well for him.

Asked the customer he expects the store to cater to, he said, “What’s exciting is because of where we are, between Saks and Bergdorf’s, we want that customer and we want that tourist customer who may just want to buy a fragrance or a candle. We want everyone to feel comfortable here. Our core business is that woman with a social calendar. Our size range will start from 0 to 28. We’ll have stock in those sizes, so that’s very important.”

The shop will offer Siriano’s clothing and custom shoes, as well as bags, which are at contemporary price points between $90 and $300. An e-commerce component will launch later in the year.

Alexandra Waldman, cofounder and chief creative officer of Universal Standard, the size inclusive apparel brand, said, “Being a part of The Curated is a ‘full circle’ moment for our brand. It was on Fifth Avenue that Polina [Veksler, cofounder and chief executive officer of Universal Standard] and I realized we were unable to shop together on the same rack — even on this incredible street famous for its fashion offerings, there was nothing for a woman my size. And it was here we realized we ​​could change that.” She said she was so happy that Siriano chose Universal Standard as the exclusive women’s clothing partner within The Curated, “and ​it’s exciting to finally give women over size 10 a place to shop on Fifth Avenue.”