Winding down his 17-year tenure at Burberry with a colorful collection that had a streetwise edge, Christopher Bailey was in a “chipper” yet reflective mood before his show.

In a wide-ranging chat, he spoke about his achievements, a few regrets, his future in fashion, and his role in Burberry’s creative transition:

WWD: How did it feel to design your last collection?

Christopher Bailey: It felt poignant. I had a lot of reflection, but I’m so serene with the decision and it just feels right. I feel extraordinarily privileged that I’ve been able to be somewhere that I have loved so deeply for 17 years. I just feel very calm and chipper about it.

WWD: You are under contract until the end of the year. How long will you stay?

C.B.: My last real working day is March 31, when I step down from my role and then I’m in advisory capacity to the board all the way through to December — as and when they need me. It’s clearly formal and contractual, but it’s not like I need to go there every day.

WWD: You stuck with see-now-buy-now for your last show?

C.B.: As I said when we started this see-now-buy-now, we don’t have all the answers — we are learning, we are figuring it out. We believe in it as an idea. We have see-now-buy-now in this show, but we realized we were selling everything, all upfront, all on the day of the show. Actually we’ve decided that a better model would be to have a phased approach to the deliveries. I don’t know what the percentage is but, but let’s say 30 percent is available immediately, and everything can be preordered. We have lots of things — with Dover Street Market, lots of different partners, Farfetch — directly from the runway you can buy them. So I would say it is a hybrid between a traditional runway and a see-now-buy-now.

WWD: What have been you greatest challenges in your 17 years at the company?

C.B.: We went in a relatively short time from being a predominantly licensed company to a fairly pure, direct-to-consumer company. As a consumer evolves so dramatically and so significantly over that period of time, it’s making sure that we don’t lose our courage and our curiosity to try new things. And to not say, “The industry doesn’t do it like this, we shouldn’t do it like this.” That has always been the biggest challenge, but it’s the thing that I felt most passionately about, trying new things, experimenting and sometimes going against the grain. 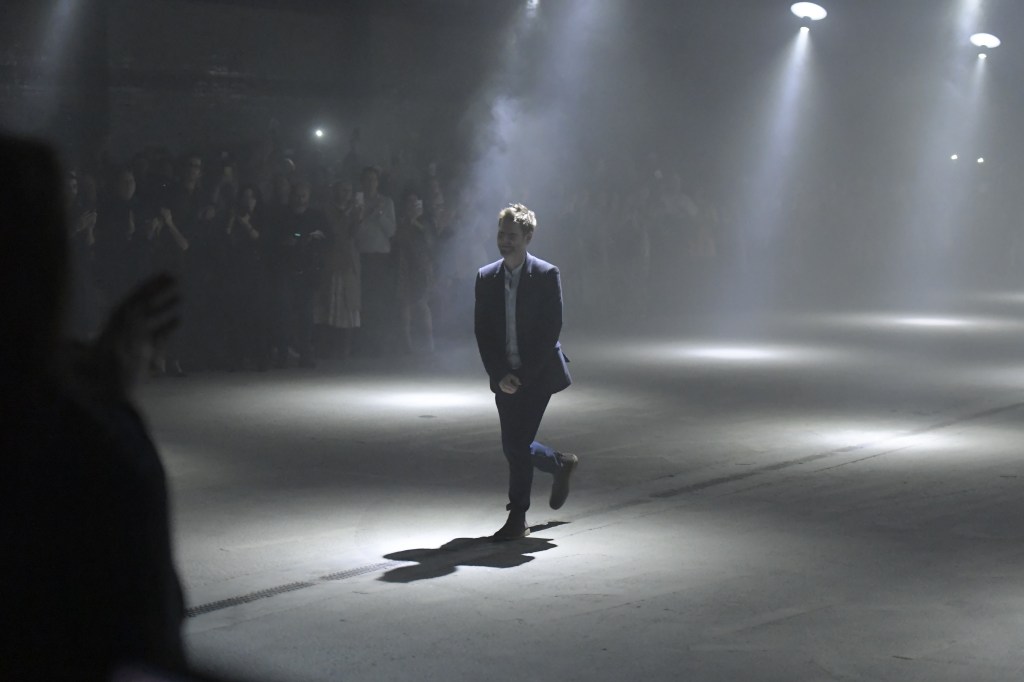 WWD: What has been your biggest achievement?

C.B.: I guess my biggest achievement was being able to work with a bunch of people who I admire and I’m just so fond of. We created like a little design school at Burberry and that was one of my own personal objectives when I joined the company. One of my most wonderful periods was being at the Royal College of Art where I could just wander into these different rooms and work with an architect, work with a graphic designer, work with an industrial designer. Having done that I feel very proud of being able to have built that. And then I think the work that we have done with our (Burberry) foundation is something that we haven’t spoken a huge amount about publicly, but I feel immensely proud that we have people who today have a much healthier lifestyle because they came to the (foundation’s) programs — whether that be through apprenticeships, whether that be through some of the training that we’ve done, or through the courses that we run. (The foundation, an independent charity, was set up in 2008 to help youths, local and international communities) and then the stuff that we have just done with the rainbow check for LGBTQ. We have an amazing platform to say, “Having a united world, having a world without barriers, without walls, where we respect and admire, where your relationships are built on the foundation of wanting to learn and be curious rather than to close off.” It was always a part of my aspiration when I joined the company that it could be more than just fashion, that it could be something a little more significant. We’re a big company and I think big companies have a duty and a responsibility to give back.

WWD: What were you unable to crack?

C.B.: A ton of things, a million things. I feel like there are always so many hills. I think the world has dramatically changed. I wished I had, the last three years, been able to spend my time doing the things I generally love, the creative side much more. Taking on the role of chief executive officer meant that certain things had to take a back seat. My biggest regret is probably that there are not 36 hours in a day, rather than 24. I have a lot of energy and stamina.

WWD: You took over as ceo at a very tricky time, with political changes sweeping China and Hong Kong — two of Burberry’s biggest markets — and putting a damper on demand.

C.B.: I feel very privileged that I have been surrounded by people that have enabled this company to keep growing, because the world changed. Hong Kong, it was quite extraordinary. It did change, but I certainly don’t want to use it as any excuse because I think you take the responsibility that you are given.

WWD: What are your plans after you step down from the board?

C.B.: I’m going to definitely spend time with my two beautiful little girls, and then I’m exploring, I’m talking to people. I’m still curious, but I really very genuinely haven’t decided how I want this next phase of my life. I’m talking to lots of different people and I will make the decision when it feels right. But I feel very calm about it. I’ve been really fortunate to have worked somewhere that I loved, so I’m not in a rush to run into something. I want to take my time. And that could end up being something big again or could end up being something tiny and very artisanal.

WWD: Have you ever wanted to do a signature collection?

C.B.: That has definitely never been an objective or a dream.

WWD: How much of a say are you having in who will succeed you?

C.B.: I’m involved. I’m on the board so I’m up to date on everything, but it is absolutely (ceo Marco Gobbetti’s) choice. I feel very passionately about this — that that relationship (between the ceo and designer) is just so fundamental. So, yes, I’m involved but it is absolutely Marco’s decision. He keeps me up-to-date because of our partnership but it’s his choice. And it’s going well.