The London-based men’s and women’s wear designer and fashion week regular has launched a new men's line called North Quarter, a range aimed to appeal to a “more commercial crowd.” 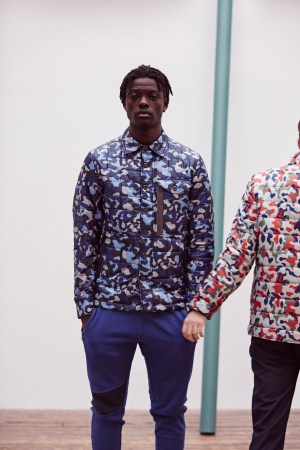 The London-based men’s and women’s wear designer and fashion week regular has launched a new men’s line called North Quarter, a range aimed to appeal to a more commercial crowd.

The line was conceived after the success of his collaboration with British high street retailer River Island last year — the clothes were sold out within a week at River Island’s Oxford Street store.

The designer came to realize he had a more commercial customer, as clients for his main collection are more boutique-oriented, international shoppers. His main collection is sold at stores including Machine A in London, Jeffrey and Opening Ceremony in New York, and thecorner.com.

Known for his sporty staples, Shannon calls his North Quarter man “a variation of a muse based on the Christopher Shannon man,” including his friends in media and design.

“The idea is that North Quarter becomes a brand in its own right,” Shannon told WWD. “At the minute I’m leading the creative direction and working with the team to set the tone.”

Owned by a small group of private investors with global sourcing partnerships, North Quarter is distributed by Zone 2, which also distributes Scotch & Soda, Samsoe & Samsoe and Eastpak. While this may be a second line, Shannon insisted it is not a diffusion line, but rather a separate entity with a different focus, ethos and structure.

“It’s different from mainline, with its greater focus on the technical aspects and fabrications,” Shannon said. “Nothing about it is related to a catwalk show, or those elements of fashion. It was product that got me into fashion — whether that’s old skatewear or track suits. This is about working piece by piece and making technical garments that can be worn in a functional way, but [they] don’t shy away from a fashion influence.”

Experimentation was key for Shannon as he played with the range. He called it “a season of experimenting and working with new people and seeing what newness could be brought to the commercial market.”

“The brand has always had so much basis in U.K. sportswear culture,” said Shannon. “I wanted to work on a more premium sportswear-based line for a while, something that looks like us, but is more accessible and practical without being too straightforward. We’ve always had interest from U.K. independents, but our mainline offering is often too directional and personal. With North Quarter we still make the design process personal, but the focus on technical product is more apparent.”

The debut fall collection is made up of 50 pieces, a lineup of technical sportswear that includes jackets, sweatshirts, shirts and jogging pants in a range of bold colors such as red, blue, gray and black, as well as camouflage and graphic detailing. Shannon focused on tech-led materials such as bonded cottons, Neoprenes and soft-shell designs with outerwear as key items such as a quilted jacket.

“I really like the camo pieces layered up, that feels fresh to me,” added Shannon. “I really like the technical overshirts, you can wear them as layers and there’s a certain smartness to them which is sometimes hard to achieve in sportswear fabrications.”

In terms of showcasing this range during the next London Fashion Week Men’s in Jan., the designer said he plans to host an event. “For the minute we will shoot campaigns, and the collection will be based in a showroom,” said Shannon. “We are talking about some sort of event at London Fashion Week Men’s next season, but the tone has to be right, it’s definitely not about a catwalk. I’d rather people saw the pieces close-up, the technical elements and the finishes and the fit.”

Prices range from 35 pounds, or $45, for a T-shirt to 350 pounds, or $450, for outerwear. The debut collection will be sold exclusively at the British retailer Flannels in-store and online on Aug. 18.

In addition to his North Quarter range, Shannon said his mainline business is keeping him busy. He has moved production to Portugal and is in talks with investors regarding the growth of his e-commerce business.

“Our e-commerce just had its busiest month, so we are starting to move more attention to that and away from wholesale,” said Shannon. “It just seems to make sense, and I like the control you have with your own online store. I’ve learned so much about our customer in the last year, which is so hard to do with wholesale partners. We’ve assessed the range and also moved our production mainly to Portugal and I’m really pleased with the quality.”

He said he is in talks with investors. “I think it has to be about direct sales — not all this hiking ‘round the world to empty trade shows. North Quarter is just another part of the brand, something I work on in a slightly different way, but it overall informs the brand as a whole. I really enjoy tying together all the projects and no matter how different they are, making them work as a whole is really satisfying. I always like creatives who can turn their hand to anything and lend their touch and the more projects I work on, the more I get to practice this.”

Shannon launched is namesake mainline collection in 2008, and it is sold via the designer’s web site and at 14 stockists globally.