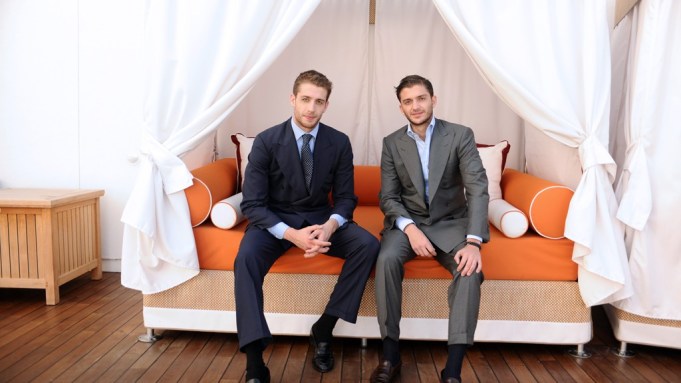 It’s a rare day when jet-setting brothers Maggio and Ignazio Cipriani find themselves in the same city, but they recently managed to rendezvous at Mr. C, their new Beverly Hills hotel. In their well-tailored suits, the pair cut dashing figures in a lobby bustling with casually dressed travelers, most of whom aren’t aware that the handsome young men are fourth-generation scions of one of the most recognized families in the hospitality industry.

Though both are soft-spoken and polite, their family’s history speaks louder volumes. Since Giuseppe Cipriani founded Harry’s Bar in Venice in 1931, the business has grown into a restaurant, club, hotel and private residence empire that includes five Cipriani locations in New York and eight more in London, Hong Kong, Porto Cervo, Venice, Abu Dhabi and Istanbul.

Ruling an empire isn’t without its battles. Giuseppe’s grandson — Maggio and Ignazio’s father, also named Giuseppe — left New York in 2009 after pleading guilty to tax evasion in 2007 (the company was forced to pay a $500,000 penalty to the State Liquor Authority to keep its licenses) and later losing the lease to the Rainbow Room. He now spends most of his time developing family properties abroad, leaving his sons to manage day-to-day operations at New York-based Cipriani USA. That in itself could be daunting for two early twentysomethings, but the brothers also chose to form Mr. C, their own independent hotel concept, “so we could have our own baby,” says Maggio, 22. When the 12-story The Tower Beverly Hills hotel came on the selling block, they jumped on it.

Privileged as they may be, they’re no strangers to the work, or a good business opportunity. Both brothers toiled at humble jobs such as making pasta and manning the cash registers as teenagers.

“Los Angeles is such an international market, so we thought it was smart to do this,” says Maggio. “We love this place and feel very at home here.”

In fact, Ignazio says he decorated Mr. C, “just like a really big house,” with a pool table in the lobby and cozy red and gray sofas beside the registration desk. All the furniture, like that in their 55 Wall Street residences, is custom made by Tedeschi.

Since opening quietly over the summer, the hotel has become a destination for fellow high-flyers like Sir Richard Branson and the Missoni family, as well as a go-to site for parties hosted by Departures and Condé Nast Traveler. The restaurant, also called Mr. C, is one of Los Angeles’ priciest spots (fare includes Cipriani’s Carpaccio plus grilled fish and pizza), yet some appreciate its remove from Beverly Hills’ paparazzi-ridden main drag. Harvey Weinstein and Emanuele Della Valle have both dined there. Several fashion houses have also been eyeing the hotel for the upcoming awards season whirl, when Gucci Watches and Jewelry will host a fete there.

The brothers are fond of Hollywood clubs such as The Beverly and Beacher’s Madhouse at The Roosevelt, but since they rarely take nights off, they plan to create their own after-hours events.

“We’d love to have a karaoke night here, and dancing,” says Maggio of the hotel’s all-glass, top-floor event space, which can be accessed via an exterior glass elevator or a hidden lift in the restaurant. “It would be like The Rainbow Room.”

Of their long-term plans, Ignazio smiles: “Hopefully one day we’ll rule everything.”