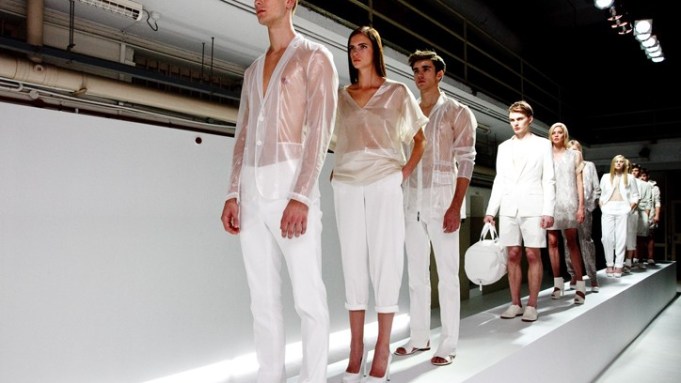 Twenty-five models, dressed in stark red or white variations of tailored jackets, trousers and other crisp basics, stood on a raised catwalk for the duration of the evening. Jail cells featured video projections of models moving and leaping within the confined spaces. Outside, in the former prison’s two courtyards, giant video screens showcased the multimedia work of Singaporean photographer Geoff Ang, who also created the visuals inside the cells.

“The spring collection is about color, volume, softness and movement and I liked the great contrast of showing it in a prison,” said Kevin Carrigan, global creative director of ck Calvin Klein. “The whole idea is about the freedom of the clothes.’’

The event is the latest melding of fashion, installation art and local architecture for ck Calvin Klein, a bridge collection sold only in Asia and Europe. Carrigan launched the spring 2009 collection in Sydney Harbour’s Cockatoo Island, in a former jail and boat building, and a year earlier unveiled the spring 2008 collection in an old World War II bunker in London.

There will be more such events, Carrigan promised, especially in Asia, which the company considers a key growth area. “Ck Calvin Klein is a brand that really resonates with the modern Asian woman because of its versatility and variety of styles,” the designer said.

Since it launched in Asia in 2004, ck Calvin Klein has grown steadily and contributed significantly to the group’s overall 5 to 10 percent increase in sales and earnings in 2009, said Tom Murry, president and chief executive officer of Calvin Klein Inc.

Reducing prices and increasing the overall marketing budget by close to 10 percent helped boost business, the executive said. “We feel strongly about spending heavily during down periods, and luckily we were able to afford that,’’ Murry added.

There are currently 40 freestanding ck Calvin Klein stores and more than 160 concessions in Asia. This year, the company plans to open another 10 to 15 stores, as well as some 60 to 80 concessions, in the region. About 70 to 80 percent of these new sales points will be in China, including a large flagship in Hong Kong, Murry said.