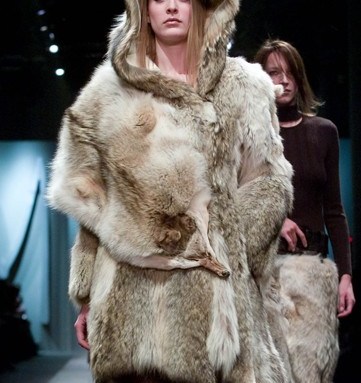 PARIS — “It’s fun to delve into the past,” Claude Montana says.

The reclusive designer, who defined power-woman dressing in the Eighties, has been thinking a lot about his past over the last few months, and is back in the spotlight thanks to an illustrated book out this month.

The 61-year-old Montana, who has withdrawn from the public eye since staging his last Paris catwalk show in 2002, worked with journalist Marielle Cro on the 192-page tome.

In addition to photographs by the likes of Tyen and Paolo Roversi, the book features interviews with models, fashion editors and fellow designers who witnessed the glory years when, together with Thierry Mugler and Jean Paul Gaultier, Montana represented the provocative avant-garde of Paris fashion. Of the trio, only Gaultier is still designing; Mugler would step away from fashion and go on to totally remake his body via weight lifting and plastic surgery while focusing on his fragrances and designing costumes for Cirque de Soleil.

The coffee-table book on Montana is due to be published by L’Editeur on Oct. 21 in France and by Thames & Hudson early next year in Great Britain and the United States. Montana and Cro will be signing copies on Nov. 2 at famed Paris tearoom Angelina, where the designer staged his first show, in 1976.

A man of few words, Montana said he felt “calm and serene” at the prospect of returning to center stage at a time when many young designers are rediscovering and referencing his work.

Though he is mainly remembered for the exaggerated silhouettes that earned him the nickname “King of the Shoulder Pad,” Montana is celebrated for his razor-sharp tailoring and skill with leather, as well as his masterful use of color — from chic navy and black to brilliant hues of fuchsia, emerald and his signature cobalt blue.

“Cut, textures and color,” is how he sums up his contribution to the style annals. “Fashion is in constant evolution, and what remains unchanged are the things I love profoundly: black and white, gray, navy, the basic colors — the real colors which you can then play with and build on by adding others.”

Montana has been out of a job since his contract with the house he founded expired two years ago. He gradually faded from the scene sometime before that, after the house was sold twice in two years, following a turbulent period that saw it file for protection from creditors in 1997.

The company, now owned and headed by businessman Jean-Jacques Layani, continues to manage licenses for women’s and men’s ready-to-wear and accessories, a spokeswoman said.

Montana — who was renowned for living life in the fast lane throughout the Eighties and early Nineties — says he lost his motivation “over time,” but offers little explanation as to why his business faltered. “We did a lot of volume in my day. But you know, I think one does not really think about all these problems. I think instinct is very important in this profession,” he offers.

Jacqueline Montana, the sister who has been by his side from the start, blames his sensitive nature. “A designer is someone fragile who needs support, and I think perhaps he did not receive as much support as he needed,” she notes.

Born in Paris to a German mother and a Catalan father, Montana moved to London in the early Seventies and began producing papier-mâché jewelry that soon caught the eye of British Vogue. After returning to Paris, he designed for MacDouglas Leathers before founding his own label in 1979.

At first, Montana’s aggressive silhouettes shocked American critics and buyers. He was accused of being misogynistic and promoting a “neo-Nazi” aesthetic, though his leather-and-studs looks owed more to the gay subculture than to any political movement.

By the mid-Eighties, Montana’s catwalk shows — with their haughty, Amazonian models styled to perfection — had become the hottest ticket in town.

“There were a lot of looks that were lifted from men’s wardrobes,” he recalls. Montana also had a fondness for uniforms, riffing on the outfits worn by aviators, marines, factory workers and even the members of the illustrious French Academy.

By the late Eighties, his burgeoning fashion empire included women’s and men’s rtw; licenses such as scarves, ties and eyewear, and a best-selling perfume, Montana Pour Femme.

Despite his growing success, the designer was media-shy, cultivating a reputation as a tortured perfectionist. But he was eyeing the pinnacle of his profession: haute couture.

“When you are a fashion designer, you dream of one thing only, and that is couture. If you get a chance to do it, it is amazing,” he says now.

Montana recounted that in the late Eighties, he was approached by Christian Dior and Givenchy to take over as creative director. But a firm offer came in 1989 from the ailing house of Lanvin, which allowed Montana to take control of its couture division without taking responsibility for ready-to-wear. Though the contract ended after just five seasons, Montana drew praise from critics, winning two consecutive Golden Thimble awards — an industry first.

His aesthetic was personified by his muse, the androgynous American model Wallis Franken, who would go on to become Montana’s wife in 1993 in a marriage of convenience that ended tragically with her death in 1996. Franken fell from a window of their apartment, in what was ruled a suicide. Many people in the industry indirectly blamed Montana for her death, saying he contributed to her depressive state by being physically and emotionally abusive. He has never spoken about it, and, tellingly, Franken is not featured prominently in the book.

“I don’t really feel like broaching the subject,” he says now.

Perhaps surprisingly for a designer of his stature, Montana has never been the subject of a museum retrospective or a monograph before, but he refuses to dwell on the reasons why.

“Listen, that’s the way it happened. You must not ask yourself too many questions,” he says. “I am nostalgic for a period, for the powerful moments I lived. But bitter — no.”

Indeed, Montana — who peppers his statements with sudden chuckles — appears to have opted for a vague optimism that deliberately ignores several paradoxes.

He has no interest in technology or the Internet, despite his reputation for Space-Age creations; he has few friends in the industry, and pays little attention to the work of his peers, yet he would like to design again.

“I don’t have a phenomenal interest in what is happening, because everything is based so much on business imperatives, and the word ‘business’ makes me bristle, to be honest,” he says. “Obviously, it would be marvelous to return, but something has to come up in a concrete and acceptable way.”

Asked whether he still had the right to use his name, he is evasive. “That is something you would have to check with the relevant lawyer,” he replies. It turns out that Montana sold the rights to his brand along with the company.

While he waits for that elusive comeback, the designer says his main pastimes are dreaming and going for long walks.

“Occasionally, people stop me in the street,” Montana says. “When they stop me nicely, it’s usually to say something sympathetic. Either that, or they pretend not to recognize me. It’s as simple as that.”