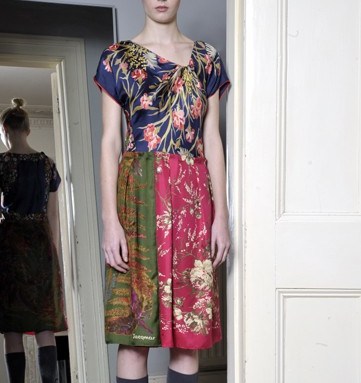 LONDON — Clements Ribeiro is breathing new life into one of fashion’s most beloved but decidedly matronly accessories: the silk scarf. During the upcoming couture shows in Paris, the design duo Suzanne Clements and Inacio Ribeiro will present Project Number 4, a five-piece collection built around vintage scarves.

“I have always loved scarves — especially ones from the 1940s with narrative prints,” said Ribeiro during an interview at the couple’s West London home that doubles as its office and showroom. “Working with scarves is part of an ongoing list of projects I’ve been wanting to do.”

The collection features a dress, blouse and skirt made from mismatched scarves — some of them hand-painted — that span the decades from the Forties through the Eighties. Prints range from the “Dynasty”-era bold and chunky to dark and organic to cheery and painterly. There are also two merino wool sweaters embroidered with silk scarf scraps.

Ribeiro, who has been snapping up scarves from markets and dealers, said the project is a continuation of the small, midseason, artisanal collections the label has been showing during the Paris couture.

In the past, they’ve created one-off pieces of ready-to-wear and accessories made from vintage couture fabrics, and cashmere sweaters with adornments such vintage jet, sequins and lace, grosgrain ribbons, frogging and pearls.

The presentation, which runs from Sunday to Wednesday at the Palais Royal, is dubbed “Scarf Mania.” It will be sold for delivery in May, and Ribeiro said Barneys New York and Blake Chicago already have picked it up.

The scarves, he said, originated from a variety of sources including French and Italian fashion houses and England’s Richard Allan. He said he even has vintage silk airline scarves from carriers such as the now-defunct Braniff.

Clements Ribeiro has preserved the scarves’ original hand-rolled hems, and Ribeiro said what he loves best about the new, one-off pieces is the “accumulation of pattern and color.” Retail prices range from about $650 for the top to $1,800 for the dress, which is lined in crepe de chine. Ribeiro said they plan to make about 100 units of each piece.

The duo plans to present its fall rtw collection during London Fashion Week, which runs from Feb. 19 to 24.