Clifford Grodd, the driving force and ceo of Paul Stuart, died after a long battle with cancer.

By Jean E. Palmieri and David Lipke and Brenner Thomas on May 26, 2010
View Slideshow 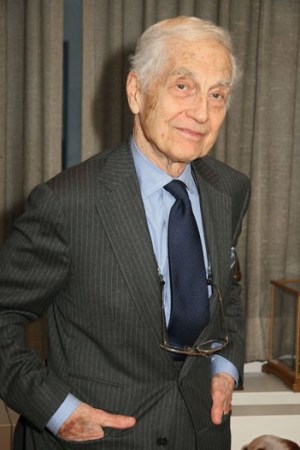 Clifford Grodd, the driving force and chief executive officer of Paul Stuart who ran the upscale specialty store for nearly 60 years, died Tuesday at his New York City home after a long battle with cancer. He was 86.

Due to his illness, Grodd, a men’s wear icon and top-notch merchant, had been unable to come to the store for the past 18 months, but nevertheless called in several times a day to check on the business.

In his honor, the store will be closed Thursday, the day memorial services are scheduled to be held at 1:30 p.m. at the Frank E. Campbell Funeral Home at Madison Avenue and 81st Street in Manhattan.

“We will close for the day in respect for his memory and great contribution to the industry,” said Sandy Neiman, Paul Stuart’s director of marketing.

Born in New Haven, Conn., and educated at the University of Connecticut, Grodd served as an Air Force gunner during World War II and was shot down over Hungary, captured and put into solitary confinement by the Germans. At the end of the war, he was awarded a Purple Heart.

Paul Stuart, a 60,000-square-foot fixture on Madison Avenue and 45th Street, was founded by Ralph Ostrove and his cousin Norman in 1938. Ralph Ostrove named the store after his son, Paul Stuart Ostrove. Grodd, who had completed an executive training program at the G. Fox department store in Hartford, Conn., joined Paul Stuart circa 1951 after marrying Ostrove’s daughter, Barbara.

Ostrove was in declining health and wanted to retire, so he asked Grodd to buy out his share of the company, which he did. The Paul Stuart logo features a fictional character sitting on a fence at Yale, according to Grodd’s account.

Grodd once described his aesthetic to DNR, WWD’s former sibling publication, this way: “We’ve constantly striven to be as upscale as possible within the milieu of our particular type of clothing, which is quite cosmopolitan in image. It’s still soft and not exaggerated, easy to wear, hopefully subtle, understated and flattering.”

Paul Stuart became known for its adherence to a soft shoulder look in tailoring. The company claimed to be the first American retailer to bring side vents to the States, as well as the three-button suit.

All of the merchandise at Paul Stuart bears the retailer’s brand. The company designs its own product and also alters other product it buys in the market to tailor it to the Paul Stuart aesthetic. Earlier in its life, the store carried outside brands, such as Gant, Corbin and Southwick, but Grodd believed Paul Stuart could distinguish itself from competitors by offering its own branded merchandise.

“I wasn’t interested in competing with designers or brands who put their names in other places. I felt that if we didn’t know our customer better than someone sitting 1,000 miles away, then we didn’t belong in the same business,” he said.

A Chicago store, which opened in 1995, now occupies a town house on East Oak Street. The company also operates licensed units in Japan and South Korea.

“I’ve known Cliff my entire career. He was instrumental to building one of the most respected brands. He was a great leader in our industry, an incredible person and a true friend,” said Ralph Lauren.

Over the years, Grodd helped dress celebrities including Cary Grant (“I had to personally take care of him at the Plaza,” said Grodd), Fred Astaire, Frank Sinatra, Paul Newman (“when he lived in Fresh Meadows”), Mel Brooks, David McCullough, David Halberstam and Philip Roth. “They look good because they’re comfortable and distinguished. And it’s natural, not staid,” noted Grodd.

He was known to exercise regularly early in the morning at the Yale Club and be among the first to arrive at work at the store, striding into his second-floor office. His exacting standards led employees to joke at times that “Grodd is in the details.”

In 2007, Grodd introduced a younger label to his stores, called Phineas Cole. Meant to appeal to a more trend-conscious consumer in his 30s, it was the company’s first subbrand and was based on the fictitious “errant nephew” of Paul Stuart, according to Grodd.

“We’re all saddened by his death,” Neiman said. “The man was a master retailer. He was a great inspiration and a leader in men’s wear and the business.”

Neiman stressed that since Grodd’s illness, Michael Ostrove, senior vice president, had been running the business on a daily basis. He will now be elevated to president and will continue to run the store.

The industry mourned Grodd’s passing, recalling him as a tough, determined retailer — one who understood his customer but stuck to his convictions. Famously, Grodd retained the store’s private label focus and refused to let designer names eclipse the prestige of Paul Stuart even after men’s wear became a brand-oriented business.

“His legacy is that you can operate a business and stick to your principles,” Wilkes Bashford said. “He stuck to his guns no matter what was happening in the business.”

“He was very independent,” said Jack Mitchell. “He constantly wanted to improve his own label.”

Others view Grodd’s legacy in his aesthetic. “If he saw a fabric or silhouette he liked, he went with it strong. There was never any halfway,” said designer Joseph Abboud, who met Grodd when he was a young man working for Louis Boston. “He always told me, ‘Joey, you’ll be a good designer because you worked retail.’ He knew that, for a designer, the retail floor is where the battle is won and lost.”

Bill Roberti, former ceo of Brooks Brothers and now with Alvarez & Marsal, said, “Cliff was a consummate gentleman. He had wonderful vision and great style. He was a true icon in the men’s business and will surely be sorely missed by his employees and customers.”

Landing Paul Stuart continued to be a prestigious account for the vendor community. “For that Wall Street elegant guy, that store was among the best,” said Arnold Silverstone, president of Samuelsohn, which makes private label tailored clothing for the retailer. “Selling to them was and is a big deal for a vendor.”