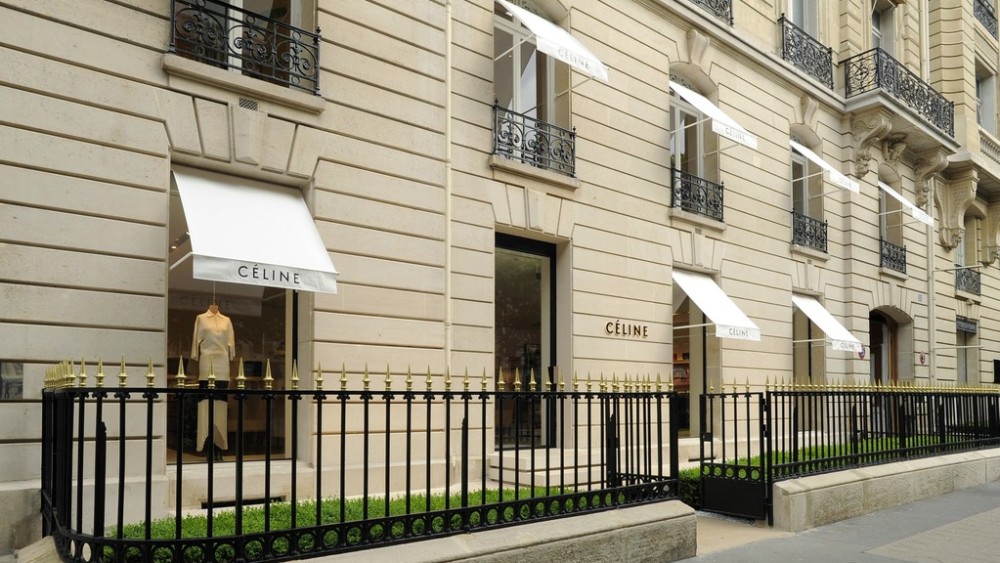 PARIS — Phoebe Philo has finally bid adieu to Céline’s “temporary” store on Rue François 1er in Paris — after more than four years in the raw, no-frills space — and decamped to a light-filled boutique at 53 Avenue Montaigne.

The unit opened to the public Monday, and was unveiled via newspaper ads, outdoor advertising and a mass e-mail.

Residential in feel, the store boasts views of a leafy courtyard, and is appointed here and there with cream sofas, armchairs, area rugs and potted tropical plants.

Upstairs, shoppers alight on a large area dedicated to footwear, a low bench ringing a hefty pillar. Next to it is a spacious rtw salon, its living-room vibe heightened by the sofas and pale parquet: broad planks of Danish oak arranged in a point de Hongrie pattern.

Chunky marble and onyx cubes are dotted throughout the boutique, and large slabs of colorful stone are embedded in the floor under clothing rails, or wrapped around pillars.

Céline declined to provide first-year sales projections, though it has said in the past that the François 1er location was its highest-grossing unit worldwide.

The high-profile Paris location — in a Haussmann-era building next to new-look boutiques by Saint Laurent, Fendi and Chanel — is one of 15 new Céline stores slated to open this year. The French firm is part of LVMH Moët Hennessy Louis Vuitton, which reported sales in its fashion and leather goods division vaulted 11 percent in the first quarter to 2.6 billion euros, or $3.6 billion.

Among scheduled openings are a 7,000-square-foot unit with 90 feet of frontage on Omotesando in Tokyo, slated to open May 31. A 5,900-square-foot location at IFS in Chengdu, one of the richest and fastest-growing cities in China, opened earlier this month.

A 4,300-square-foot store in Crystals at CityCenter in Las Vegas is slated to open May 14 and another on Wooster Street in New York’s SoHo district is budgeted for late August.

LVMH, which owns the handsome, prow-shaped building on François 1er that had housed Céline’s temporary store, has yet to indicate which of its luxury brands might take over the retail space.