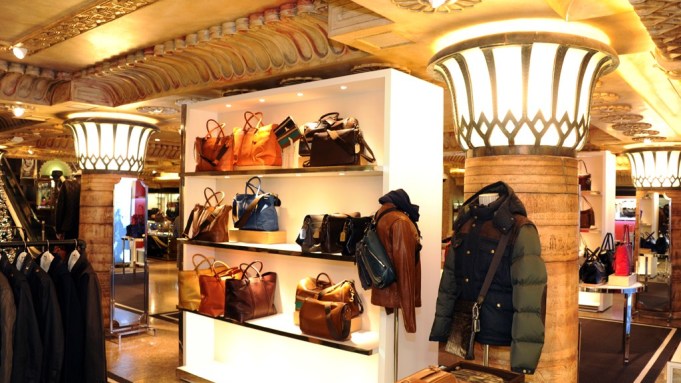 LONDON — Coach Europe has a new president who’s preparing to take the brand’s sporty, all-American lifestyle message further into a region where the brand believes there’s room for growth.

Nigel Darwin, formerly managing director, international at the British fast-fashion retailer New Look, took up his post last month and since then has opened a 1,640-square-foot space at Harrods.

The Harrods shop-in-shop — a first for Coach in the U.K. — is just the beginning of a planned string of rollouts across Europe, where the brand is aiming to build up a market share of more than 10 percent in the long term.

“It’s a 10-year vision, and our ambition is that Europe — all of Europe — becomes a significant part of the overall Coach business,” Darwin said. “We want to be successful with the local customer base as well as tourists — but we don’t want to build up a tourist business exclusively. And we’re looking at a multichannel approach: retail, wholesale and online.”

At Harrods, about 40 percent of the customers so far have been locals, according to Darwin. In London, Coach has stand-alone stores on New Bond and Regent Streets and at the Westfield London mall. It also sells at Liberty’s new accessories hall.

The brand already has outlet stores at Bicester Village outside London and at Kildare Village in Ireland.

It may be just the right time for Coach to court Europe’s local customers, who reside within — and outside — the big cities, and who have pulled back on big-ticket spending as their economies have slowed.

Coach already has shops-in-shop similar to the one at Harrods at Printemps in France and El Corte Inglés in Spain. Later this month, it will open its first German store, in Metzingen. Darwin calls the 5,400-square-foot unit a “good first entry into the German market, with local, European and other tourist customers.”

Coach has been expanding in Europe via a 50-50 joint venture with the British men’s wear brand Hackett, which is owned by Pepe Jeans SL. It opened its first European flagship, on New Bond Street in London, in September 2011 and the Regent Street store followed soon after.

Coach pitches to a broad audience, and the Harrods shop-in-shop, which sits near Lana Marks, Zagliani, Philip Lim and Reed Krakoff (who is also Coach’s executive creative director) on the lower ground floor, is a case in point: The entry price point is 35 pounds, or $56, for a small key ring, while handbags start at 185 pounds, or $294, for a cross-body style.

At the same time, Coach has worked on some exclusive items with Harrods, including a bright blue crocodile tote for 10,000 pounds, or $15,900 at current exchange rates, and a hot pink crocodile cross-body bag for 3,000 pounds, or $4,770.

The lion’s share of the offer is from Coach’s Legacy and Madison collections. There is also a selection of ready-to-wear and accessories, including sunglasses and long leather gloves in eye-popping shades of pink or green.

The space, at Harrods’ newly renovated Luxury and Designer Accessory Rooms, has a dedicated men’s wear area that features a range of product from outerwear and utilitarian cross-body bags to crocodile carryalls. Men’s wear — which also includes belts, scarves and gloves — currently accounts for 30 percent of the business.