With a series of major initiatives, the company seeks improvement on the global stage while restructuring its North American business. 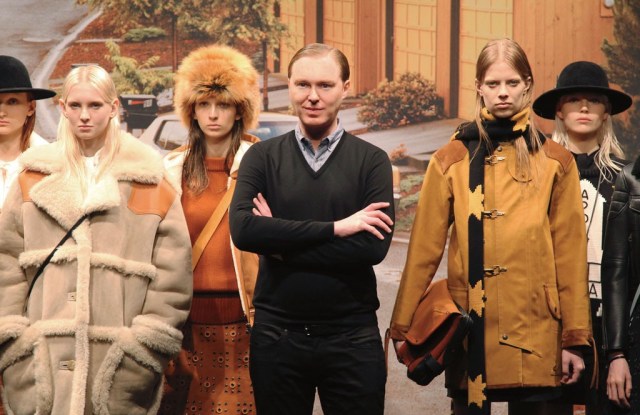 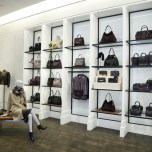 Coach Inc. is in transformation mode.

This story first appeared in the June 20, 2014 issue of WWD. Subscribe Today.

With a series of major initiatives, the company seeks improvement on the global stage while restructuring its North American business, including plans to close 70 full-price stores and a revamp of its outlet business.

That’s the word from Coach executives during its analyst and investor day presentation on Thursday. The company is also projecting for fiscal 2015 low-double-digit revenue declines, as well as a high-teens comparable-store sales decrease for its North American stores.

Investors were not happy, and responded by sending shares of Coach down 8.9 percent Thursday to close at $35.69 on the New York Stock Exchange.

Chief financial officer Jane Nielsen told analysts and investors, “We are not satisfied with our current performance.” She went on to describe a five-year plan as a “concentrated period of investment” aimed at driving sustainable revenue growth in part through a replatforming of stores; supporting high, stable gross margin, and optimizing productivity. The plan will impact international and domestic aspects of the business; cost between $250 million and $300 million, and occur during fiscal years 2014 and 2015.

As for its full-price stores, the firm is planning to shutter 70 underperforming North American sites, with the closures expected to be finalized by the first half of the 2015 fiscal year.

Further, the stores in general will see new concepts to match the more fashion-forward agenda of creative director Stuart Vevers, with the first renovations slated for November. The top 12 North American markets will be among the first for investment in flagship and fleet renovations, with the rollout to other markets in the second half of fiscal year 2015. The company, which is also looking for a new Fifth Avenue flagship site in New York, plans to move to a semiannual sales model when it comes to in-store promotions.

On the outlet front, Coach intends to close two existing outlet stores, and open 10 dual-gender locations. In addition, 13 men’s stores will be consolidated into existing women’s stores. The company’s goal for its outlet concept is to increase the relevance of its factory product. Vevers will introduce outlet items that are more in tune with the brand’s main ready-to-wear and accessories line.

To that goal, a main design objective is to shift out of the brand’s signature logo designs, particularly in handbag offerings, and offer more leather goods. Outlet stores will also move to de-emphasize promotional pricing strategies in order to drive the discount rate down and move ticket prices up. A similar strategy will be implemented within department and wholesale stores by discontinuing promotional in-store “Coach days,” which offer additional sales on Coach products. Coach’s electronic outlet store will also be revamped in early 2015.

Coach is eyeing China for much of its international growth, where the brand has jumped to number three in 2013 from eighth in market share rank in 2008. “We see China as the next $1 billion business for Coach,” said Ian Bickley, president of the international group. Bickley added that China’s sales increased by a compound annual rate of 70 percent over the past five years. There are 147 Coach locations in 52 cities, including the Mainland, Hong Kong and Macau. Coach also plans to renovate and add flagships in key cities, such as London, Paris, Milan, Dubai, Singapore, Beijing and Melbourne, over the next two to three years.

Vevers said his aim is to “redefine and to reestablish Coach’s unique place in the market.” He noted that Coach “must design desirable products that become icons with our brand codes.” The company is planning a two-part advertising campaign for the fall offerings.

The company’s initiatives are geared toward achieving gross margin at 69 to 70 percent and operating margin at 20 to 25 percent by 2017, and become “best in class” by 2019.

“We’re creating an aspirational identity for all of our customers,” said chief executive officer Victor Luis during the question-and-answer period. Luis emphasized that the company’s message is “about evolving the Coach brand. It’s not about the next ‘It’ bag that we’re launching or the next ‘It’ collection. It’s about, at the end of the day, how we evolve the brand over this journey that we are on.”

Citigroup’s analyst Oliver Chen said, “Our view is that the strategy and new product look strong; however, visibility on timing and achievability of lower guidance still remain a risk as each new piece of the strategy carries risk given new product collection structure, dramatically different marketing campaigns, product shifts in outlet and a differentiated selling environment. We are hopeful but remain cautious, even with the best product and marketing and store experience the traffic comeback may not be easy.”

The analyst concluded that the “bottom line is that a turnaround here is going to take a long time. Competition is fiercer than ever, which will continue to pressure same-store sales, margins and earnings until new initiatives take hold.”

He also noted that the “company has numerous initiatives in play to transform the brand’s appeal, including rejuvenating product, bolstering competitive messaging and closing stores. However, the substantial shift in the competitive landscape won’t be easy to reverse, and it will take time for these strategies to fully unfold.”