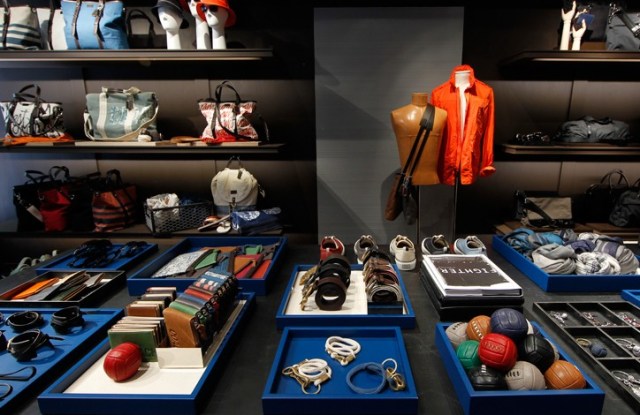 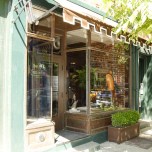 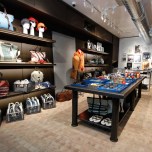 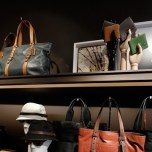 The brand’s men’s sales are dwarfed by those of its women’s products, but Coach wants to rectify that. A major part of that plan is the opening of men’s-only stores, the first of which will be unveiled Friday at 370 Bleecker Street in Manhattan, joining men’s powerhouses Ralph Lauren, Marc Jacobs, Black Fleece and Tommy Hilfiger on the trendy West Village shopping strip.

“We’ve been talking about men’s and how to give it its own platform for a long time,” said Mike Tucci, president of North American Retail for Coach Inc.

That platform is a 550-square-foot jewel box of a store that incorporates many Coach signature elements but tweaked in a masculine way. For example, instead of the color scheme being grounded in white with brown accents, the men’s store reverses the hues, using mahogany as the primary focus. The floor is an end-on-end fir that mimics the original in the company’s headquarters on 34th Street, as does the exposed duct, which is also found uptown. Coach’s cantilevered shelves, in dark brown here, are used to display the small leather goods, business and travel accessories for which the company is known.

A Bleecker table, first used in the company’s Legacy women’s store next door, has been replicated here to hold wallets, pouches, footwear, watches, eyewear and jewelry. In a nod to the neighborhood, Tucci said Coach retained the brick walls and original facade. “We’re honoring the neighborhood and the building,” he said.

The store also carries an assortment of canvas boat shoes and flip-flops along with nylon and leather jackets. Swimwear is also offered.

“We’re giving space to products we think can be nice businesses for us,” Tucci said.

In total, 30 percent of the mix is exclusive to this store and includes such items as graffiti-printed canvas totes and the leather cuffs with metal hardware. The company will also use the store as a testing ground for new products as it seeks to grow its men’s business, which is much smaller than women’s. “We need to keep pushing from a product standpoint,” he said.

He declined to provide a volume projection for the store, saying only that “it has to work from a financial standpoint. And we’ll be tough on ourselves.”

Tucci said Coach views this store as a prototype for other men’s stores. “We’re looking for additional spaces in the U.S.,” he said, noting that while no other leases have been signed, the company is seeking sites in its strongest markets. “Globally, we’ll leverage our strongest markets and that’s where we’ll put a stake in the ground.” He declined to provide a number for how many men’s stores Coach would like to ultimately operate, saying, “It’s less about the number, but about the concept of a freestanding men’s enterprise.”

Tucci did say Coach is “looking at major cities where we have flagship locations and our most dominant malls.” Ideally, a men’s store would be in close proximity to a flagship or women’s store. Internationally, Japan and China are seen as key markets as well, he added.

Tucci acknowledged that even in the flagships, men’s is treated as a second-class citizen. “It’s hard for men to shop,” he said. “It’s always in the rear.” Even so, Tucci believes men’s will be well-served in the small size of the Bleecker Street store. “The smaller footprint works,” he said. “It’s easier from a merchandising standpoint.”

In fact, Coach is so enamored with the store that elements will be incorporated into the men’s departments at the existing flagships, including the one at 595 Madison Avenue in New York, Tucci said.