The brand today will launch its fall campaign centered around family.

Coach brand ambassador Jennifer Lopez and her children in the fall campaign.

Coach is celebrating family for its latest advertising campaign. 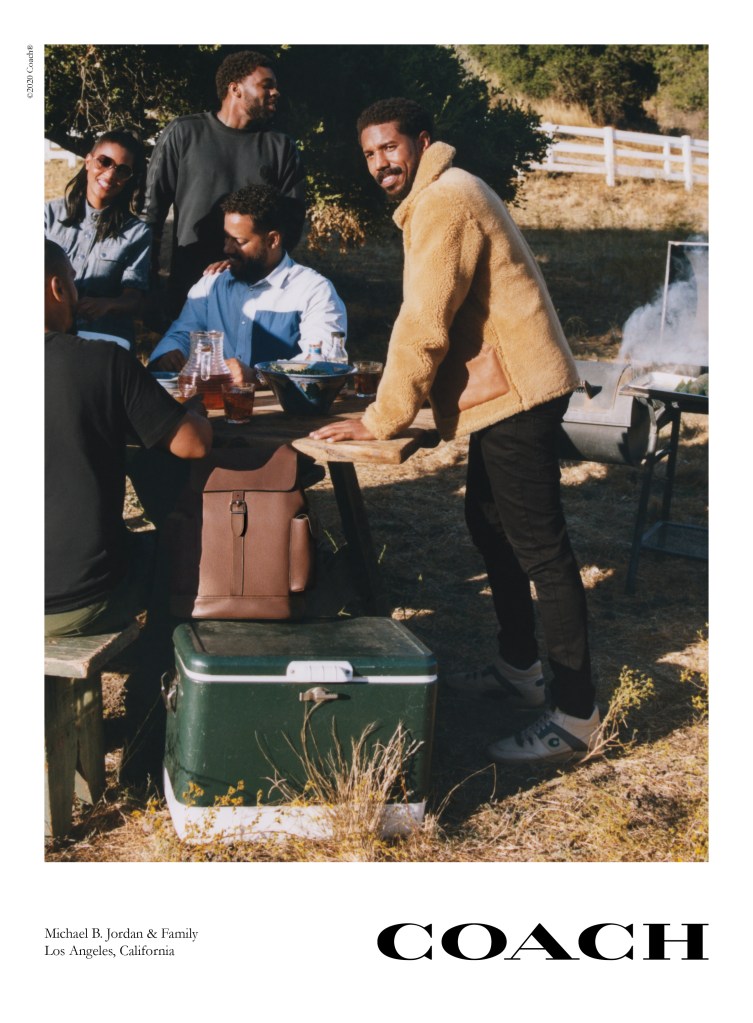 Michael B. Jordan and his extended family in the Coach ads.

Other faces in the first of the ads will include Japanese model and actress Kiko Mizuhara and NBA player Jeremy Lin. Later in the season, others will be featured, including roommates Julia Fox and Richie Shazam, ballroom emcee, writer and producer Jack Mizrahi and his House of Gorgeous, photography collective Street Dreams Magazine.

“Coach has given me an opportunity to reflect on three generations of love and appreciate the blessings that I have,” said Lopez. “In a year like this year, where there is so much chaos, so much change and uncertainty just happening all around us, family is all about having a constant source of love and light for each other. I have never felt so close to my family or so dependent and needing them as I have during this time in my life.”

“Togetherness and family are really important right now,” said Jordan. “For me, my family and friends are my support system. They’re what keep me going and keep me motivated to work hard, lead by example and be the best version of myself.”

The campaign was shot through a series of unfiltered stills and films inspired by home videos by photographers and directors Ryan McGinley, Hao Zeng, Renell Medrano, Brad Ogbonna, Takako Noel, Gen Yoshida, Fan Xin, DJ Furth, Zhang Meng and Jian LV. It will launch today with a series of posts asking Coach followers to share their thoughts on family and what it means to them.

Coach creative director Stuart Vevers took a few minutes Wednesday afternoon to discuss the genesis of the campaign, how he’s handling the pandemic and his plans for the upcoming fashion season.

WWD: Where have you been staying for the past five months?

Stuart Vevers: In the city. I haven’t stepped out of my home.

WWD: Do you know when you might go back to the office?

S.V.: We’re looking at some time after Labor Day but I think it’ll be specific cases. I don’t think the whole office will go back. Honestly, I’d really like to get my hands on product soon. We send parcels back and forth to each other’s homes but we’re being very careful about how we’re going back to the studio.

WWD: Where did you come up with the idea of Coach Family and how did you execute the campaign in the middle of a pandemic?

S.V.: It becomes personal: it’s about how you feel and how the people around you feel. We were talking to each other and what feels important, and the idea of family came up. It could be the family you were born into or it could be the people you love. For me, during the pandemic, I’ve reconnected with the people that I really and truly love in a way that feels different than it has before. You realize who’s important to you. That’s where the idea came from. Then it was having that conversation with the Coach family — Jennifer and Michael and other people like Jack Mizrahi and the House of Gorgeous — [asking them] who is important to you. That led to a back-and-forth about the people they wanted to be photographed with. Also, there’s something practical about using the people that you quarantined with. It makes sense they be together.

WWD: Did you use photographers or did they shoot the images themselves?

S.V.: There was a really tight team of people and there have been a lot of guidelines that have been shared about how to do a safe shoot. So there were photographers there but it’s all about following those guidelines to social distance. The logistics are very different and it was very important to make sure everyone felt comfortable. Ultimately, it was much smaller groups, and intimate, which I hope comes across in the photographs.

WWD: How will you build on this in future seasons if things get back to “normal?”

S.V.: None of us really know exactly what the future is going to bring. The idea of family — modern family — is something that we’re going to build on as we move into the season and holiday, and it’s an idea that continues into the next collection I’m launching in September. They’re all connected.

WWD: I know they’re playing basketball in a bubble. Are you designing in a bubble?

S.V.: No, but I’m completely amazed at what we’ve been able to achieve. It’s a shoutout to the group of people I work with and their resourcefulness and creativity to make things happen. We’ve been realistic. We’ve scaled back our development. It doesn’t feel right to develop at the same pace but we’ve managed to create a great collection and it feels like an achievement. A lot of people said, “You’re not expected to do this.” “Is it necessary?” But you know what, I do think it’s important. The way that we respond to what’s happening in the world is such a vital part of fashion and to maintain some sort of connection to the world and what’s happening and to express that creatively, does feel really important.

WWD: Generally you travel and get inspired that way for your collections. But that wasn’t possible this season, so what inspired you this time?

S.V.: It’s an opportunity to really explore the values of Coach. What is really important to Coach, to me, what feels right for this time. So that sense of how do we dig deeper into why we’re here. Like the campaign, it’s very real, it’s about the people we love. The campaign is almost like a stolen moment and it’s the same thing with the collection. I didn’t want it to be about escapism. I wanted it to be connected to something real and still be creative. Why a brand like Coach still has a place in peoples’ hearts even in these difficult times.

WWD: You’re also known for your very elaborate runway shows. But that can’t happen this year so how are you going to  present the collection next month?

S.V.: I don’t want to give too much away because we’re not quite there, but we’re not staging a runway show. So for me, it’s about recognizing that this is a very unique moment in time. I did feel it was very important to create something in this moment. We will look back on this time — it’s been life-changing for everyone in so many different ways — and to document this moment with creative output felt important.