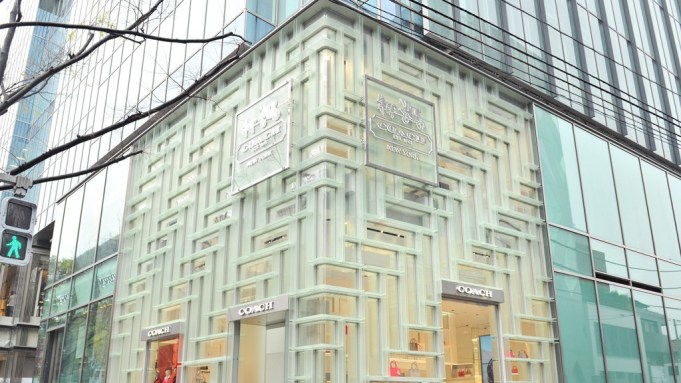 TOKYO — Coach is gearing up to open its ninth flagship store in Japan in a prominent location on Tokyo’s fashionable Omotesando Avenue. The store, designed by architectural firm OMA, anchors a new multipurpose building that will also be home to an Emporio Armani relocated from down the street, as well as stores for Three Dots and Nespresso.

“Omotesando is a key location relative to others for many reasons,” said Victor Luis, Coach Inc.’s president and chief commercial officer. “It is, after Ginza, the second tourist shopping destination in Tokyo, of course. Omotesando, together with the Aoyama area, attracts a very fashion-forward consumer. We haven’t had a presence there, so for us it was a key void to some extent, but we don’t see this as just filling the gap.”

Luis noted that the Omotesando store represents the evolving image of Coach as a brand.

“It reflects for us, with the work that we did with OMA, a new departure for the brand in terms of architecture,” Luis said. “At the same time, in terms of the layout, it’s very much headed in the direction of the brand, which is aligned with our stated strategy to move the brand from a handbag and accessories focused brand to much more of a lifestyle brand, while still anchored in handbags and accessories.”

Luis said he was unable to discuss matters related to business, as the company is currently in a blackout period.

The 4,944-square-foot store follows the same design principles as that of Coach’s shop-in-shop at Macy’s Herald Square, but Luis said there are currently no plans to apply the concept to subsequent stores.

Both the interior display shelves and the window displays are constructed of rectangular modules of various sizes and orientation, which easily adapt to a wide range of products.

“Usually an architect designs the exterior of a building and someone else designs the interior, but then there is no connection between the facade and the inside of the shop,” said Shohei Shigematsu, partner and director of OMA New York. “By connecting the [design of] the facade and the displays, we created a connection between the inside of the shop and the zelkova-lined street outside. The herringbone pattern of the cubes was conceived with the evolution of Coach as a brand, so that in the future the tall, narrow ones can be used to display clothes.”

The Omotesando store, which opens Thursday, will stock nearly the full selection of Coach’s women’s and men’s lines. The first floor houses a women’s shoe salon and women’s handbags, accessories and outerwear, while the second floor is dedicated to Coach’s booming men’s business and also has a small repair counter.

The company created several items that are exclusive to the store and available in very limited quantities of just one or two per style. These include a series of alligator skin handbags in two of Coach’s Legacy styles, which retail for 472,500 yen, or $5,040, and 1,260,000 yen, or $13,440, respectively, at current exchange.