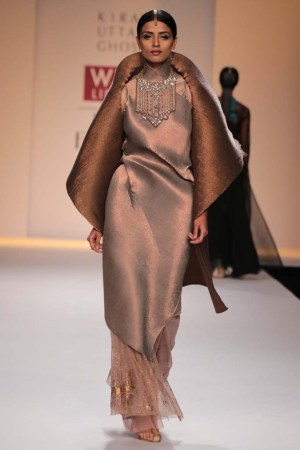 “There’s much more clarity about the vision,” said Rajeev Saxena, an independent analyst who went on to describe the growth and business savvy that has been increasing among designers. “Embroidery and appliqué continue to be a unique part of their craft, but it is being done with a new panache and more attention to the silhouette,” he said.

Although monochromatic tones made a strong showing during the five-day event from March 26 to 30, rich hues continued to dominate, and it was obvious that designers were paying more attention to cut and that digital prints and embroidery are both being used more creatively and subtly.

French designer Emanuel Ungaro, who visited the fashion week, noticed the focus on color as well. “India is a vibrant country, dripping with color and vivaciousness,” he said, commenting on the “liquidity of a sari” and the innate grace it offers to the wearer. He said that the movement the sari offers mesmerizes him.

There were 119 designers showing on the runway with 31 shows and more than 100 stands at the accompanying exhibition.

Deep, rich colors were evident from the very first show by Tarun Tahiliani. It was also a showing of the greater sense of preparation that is being seen in the industry.

“I was so ready for the show last evening that I set to thinking about my next collection,” Tahiliani told WWD.

Another trend in his show, which was apparent throughout the fashion week, was a focus on more wearable clothes: “We’ve been very focused and this time the show is all prêt. In India, we either have over-the-top bridalwear or ill-fitting casual clothes copied from the West. I believe ready-to-wear is going to be in great demand in the future,” Tahiliani told WWD.

The focus on luxury bridalwear was still strong as designers recognize its importance in the Indian market. Anupamaa Dayal, who usually goes bright and contemporary, focused on this segment this time, with bright lehngas (a traditional full-length, full-bodied skirt) and plenty of gold embroidery. Others, including Vineet Bahl, had neutral-toned lehngas as a backdrop for heavy embroidery.

There was anticipation to see Rahul Mishra’s entire collection — it won him the Woolmark prize earlier this year, a first for an Indian designer. Notable for the fine embroidery and subtle styling, Mishra added to the emerging trend toward quiet elegance.

Abraham & Thakore’s designs in raw silk in shades of beige, white and black, the tussar silk trenchcoats and the ikat designs focused around the theme of the urban hunter.

The showcasing of Western wear was dominant with younger designers, with a greater play with fabric.
“I know that is the most important part of design for me now,” said Nachiket Barve, who used the theme of Maori culture to showcase designs in organza, chiffon and silks and spoke about incorporating several elements that brought the fabric into its own. “In India we love the idea of ‘conceal and reveal,’” said Barve. “And layering has become a new way of dressing. The sari can be both layered and transparent too.”

Layered and transparent came up repeatedly. Vaishali S took up the theme with her layers of silk and other fabrics with free-flowing silhouettes. Another designer who worked with Indian textiles was Aneeth Arora, who brought out layering in a different manner by using wool, muslin, block prints, ikat and checks.

Playing with colors was key to some designers: Pankaj & Nidhi used mint and vermilion for their collection inspired by playing cards, further highlighted by blacks and whites and gold cord work. Mandira Wirk’s burgundy, amber, purple and charcoal colors complemented her styling of jumpsuits, trenchcoats and gowns with cascading ruffles.

“The leveraging opportunities are more abundant; with younger people getting tuned into fashion, there’s a better appreciation of design and motifs that they can connect with. Fashion itself is something that keeps changing,” said Atul Chand, who is divisional chief executive of ITC’s Lifestyle Retailing Business. Wills Lifestyle, a chain of retail stores and the main sponsor of the event, is part of the ITC group.

Chand added that this season a new initiative at the shows was to hand out radio frequency identification tags to consumers so they could share their views about the shows instantly. Technology obviously inspired designers as well — Rina Dhaka’s show was inspired by symmetry and instant technology and Anand Bhushan was taken by industrial inspiration with spiked footwear and leather jackets, wire and acrylic.
Nachiket Barve agreed that the fashion game was changing — both on the runways and off. “People are buying more curated stuff — they’ve become more evolved, and that is true in many different cities — Mumbai, Chennai, Delhi, Ahmedabad. The online market is changing that very quickly as well,” he said.

Raj Shroff, a Bangalore-based designer who had only had an exhibition stand, said that he found the five-day event a “meeting hot spot with buyers but also with other designers, and all of that creates a lot of perspectives that make your designing richer. “

“It is part of the winning game to be here,” he said, then added, “But for me it’s not about winning the game but creating beautiful outfits. I’ve showed at London Fashion Week and several other international locations. But I get my inspiration here.”

Then there is the Bollywood effect. Actresses appeared on the runway in several collections: Tarun Tahiliani started out with actress Shilpa Shetty, and Ali Khan presented the award to the winner of The Debut, a competition of young designers. Even the finale had a Bollywood star: Namrata Joshipura’s show had Kangana Ranaut, whose new movie “Queen” has been a box-office hit.