Designers turned to the earth, fire and sky for inspiration for home and furniture collections. 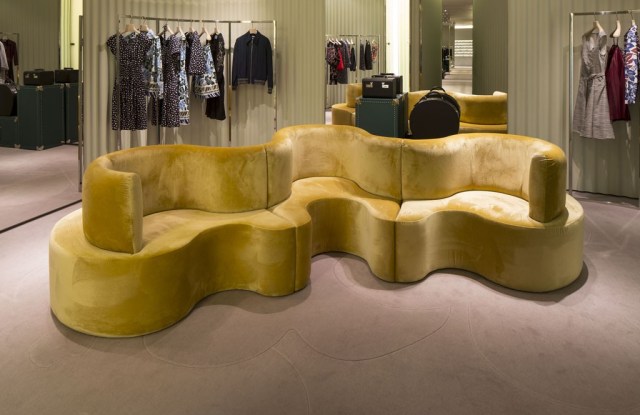 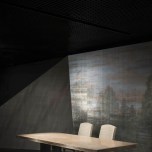 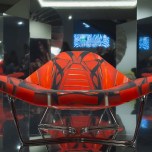 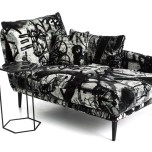 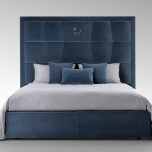 MILAN — Designers at the 53rd Salone del Mobile turned to the earth, fire and sky for inspiration for home and furniture collections that were rich with color, texture and nature-inspired patterns.

The six-day event, which runs until Sunday, was sold out before it began, with more than 2,000 exhibitors in the sprawling, out-of-town fairgrounds alone. Hundreds of other designers showed their latest creations in showrooms and spaces such as disused garages, cobblestone courtyards and architects’ studios around the city, in various design districts such around Via Tortona, Stazione Lambrate and Via San Maurilio.

Although official figures for the fair have not been released, the furniture business worldwide is thriving: According to a report by Csil, Italy’s organization for light industry, the furniture market doubled in the 10 years between 2003 and 2013, with sales reaching $436 billion. Csil said in its latest report, presented during the fair, that much of the growth has come from emerging markets, China in particular, which now represent 47 percent of consumers of interior design.

Over the past decade, demand from countries including Brazil, India, Russia and Turkey has grown, while markets such as the U.S., Germany and Japan have contracted. According to Cosmit, the organization that runs the Salone, non-Italian exhibitors now account for 30 percent of the fair’s total.

Junpei Tamaki Design, a small Japanese company, is one of them.

“We were inspired by the big snowstorm in Japan in February, so the furniture is like a landscape showing the different surfaces of snow,” said Iori Tamaki, the company’s design manager, pointing to a small collection of all-white designs. On display was a tall stack of shelves surrounded by a double helix shape, a cabinet with patterned sliding doors that, when layered, made tiny snowflake shapes, and small chairs with names like Fluffy and Thaw.

Tyler Hays, founder of the design company BDDW, this year introduced a ceramics collection that was on display alongside his handmade furniture. “I dug up the clay from beneath my studio in Philadelphia,” said Hays, who was inspired by American crockery and industrial ceramics. “I rolled out the clay flat — like a pie crust — pinched it and then doodled on the designs,” said Hays, referring to the naïf looking cups, saucers, teaspoons and vases.

Allegra Hicks presented her new collection of rugs at the Alberto Levi Gallery. Called Elements, the line was inspired by earth, air, fire and water. Starting from her watercolor drawings, Hicks developed the patterns into pileless kilims, chain stitch or hand-knotted Rajasthan rugs. “These share a common ground with my fashion designs, they are all part of the same family,” said the Italian-born, London-based fashion, fabric and home textiles designer, who launched her rugs in 1997.

Even the big brands were proud of their nature-inspired credentials. Marco Bizzarri, president and chief executive officer of Bottega Veneta, proudly pointed out to guests the company’s new “eco-garden,” with its seasonal vegetables, at the entrance of the company’s sprawling Milan headquarters. He said the brand’s home collection — with marble tabletops in black and gold swirls, extra durable mohair velvet sofas and bed made in oak and black leather piping — is “growing, in line with the Bottega Veneta concept,” and said he was “happy” with its performance.

Armani Casa introduced its first range of wallpaper, printed with palm trees and outdoor landscapes. The collection, done in collaboration with Jannelli & Volpi, explores the use of modern digital printing techniques: Silk was woven with a special metallic thread, creating a marble motif, while shantung was embellished with a delicate palm tree design and a trompe l’oeil landscape. Standouts among the furniture offer included a bar cabinet with a carved walnut finish and a bamboo cane design on its wooden surface.

Roberto Cavalli showed off his new Wings & Roses collection, which includes a sofa decorated with prints of oversize roses, and a large armchair that mixed chrome, steel and a fabric with an abstract print, inspired by Italian design’s Radical period. He called the collection “strong and fierce, like a racing car.”

Prada turned to Verner Panton to reimagine the company’s CloverLeaf sofa in a new color palette, made exclusively for the brand’s boutiques. At Prada’s Via Montenapoleone store, the silk velvet seats were shown in red, gold and emerald green.

Reed Krakoff also looked back at chairs that were first developed for his boutiques and, in collaboration with Established & Sons, created The Felt Series, a collection of furniture in gray felt.

“It’s a timeless and season-less material, and gray is the symbol of the brand,” said Krakoff. “One day, I may go into a [full] home collection, now it’s more about iconic ideas.

“This is a first step and a touchstone for the brand,” said the designer, who will open his first namesake boutique in Europe in Paris in July. Krakoff also said he was “looking at opportunities” in Milan.

Trussardi used natural materials, such as Carrara marble, for a collection designed in collaboration with architect Carlo Colombo. The items were mostly understated in tone, with an emphasis on clean lines and the earthy tones, cool grays and velvety browns associated with the fashion brand. Leather in varying weights and thicknesses was mixed with plain and textured cotton and linen fabric, as well as touches of Carrara marble, different types of wood and metallic finishes. “Since we are a lifestyle brand, and above all a brand that emphasizes the importance of the home and family, for me this was a crowning achievement and the complete expression of our company,” said creative director Gaia Trussardi.

Etro introduced its first range of furniture pieces at the company’s new Etro Home store and showroom, located in the heart of Milan’s arty Brera district. The furniture collection, directly produced by the company, includes a sofa, an armchair and a table embellished with the brand’s iconic paisley multicolor fabrics.

At the fair, brands including Versace, Missoni, Diesel and Fendi all showcased collections rich with color, pattern and texture.

Versace’s collection, as usual, was bold and featured plush sofas done in a patchwork of fabrics with Medusa head patterns or flocking and chairs with fat golden curlicues. Missoni worked a nature theme with sofas covered in a tree bark print and ottomans upholstered with a bright, Sixties-inspired flower designs against a dark background, and a host of other florals. Referring to the brand’s upholstery, Rosita Missoni put the spotlight on the company’s ongoing “research on textures,” seen on the new “Papavero” pattern, a floral design that has an almost 3-D-like effect. “I wouldn’t want anything that looks flat,” she said.

Diesel was full of patterns as well, including a black and gray graffiti one and another inspired by a photograph of a rock formation, both of which covered slouchy sofas. Color came in the form of a wing chair that was done in the rich hues of a lava lamp. Fendi was an ode to texture, with a sleek nabuk sofa with exposed stitching designed by Toan Nguyen and an ultrasophisticated, sculpted Star table done in ebony macassar and brass, designed by Thierry Lemaire.

Cappellini and Cassina were both big on color and texture this year, with the former turning out chaise lounges in a eye-popping sea blue and chubby velvet chairs with low backs in shades of emerald or cream. Cassina created a chaise lounge in a nubby lavender tweed.

Back in the city center, the Italian high-end design firm Nemo unveiled its first flagship on Corso Monforte during Milan Design Week. The brand’s ceo Federico Palazzari called Monforte the “street of light,” as it’s home to the showrooms of some of the most prestigious lamp brands in the world, including Flos, Luceplan, Artemide and FontanaArte.

Nemo presented In The Wind, a floor and pendant lamp created by Japanese designer Arihiro Miyake. The LED lamp is produced using a technology, invented by the company, which creates a torsion and misalignment of the aluminum extruded bar that is available in matte white or black.