The number of retailers was up 55 percent this season compared with last, and they apparently liked what they saw.

By Samantha Conti and Julia Neel on June 19, 2013
View Slideshow 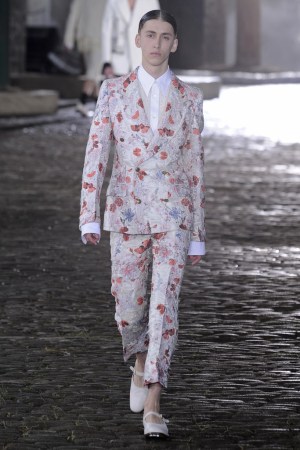 LONDON — The number of retailers at London Collections: Men was up 55 percent this season compared with last, according to the British Fashion Council, and they apparently liked what they saw. Here’s what British and American buyers had to say about the three-day showcase, which wrapped up Tuesday:

Trends: “I’ve seen a continuation of color and very bold graphic prints. There’s been a rainbow of prints, from aquatic blues to pinks and corals. I’ve found that what I’ve seen here in London is really two extremes: a very young, urban, graphic look, then a much more traditional, heritage offering.”
Key Shows: “Burberry nailed it and Rag & Bone was phenomenal. McQueen was really directional and I thought YMC was really cute.”
Discoveries: “The buyers aren’t here with me, but I will be introducing them to Hentsch Man and Hunter Gather when we regroup.”
Memorable Moments: “Seeing all of the Savile Row tailoring at Lord’s Cricket Ground — that was amazing. To see that particular aesthetic in that environment was special. Watching Elton John introduce The Strypes at the dinner that David Furnish hosted with GQ at his home was pretty magic. Building on the relationships that I forged a year ago in London and seeing that London really is a hub for men’s wear.”

Trends: “It’s a bit early for us to be spotting lasting trends, especially since London has such a mix of young avant-garde designers, traditional brands and big businesses. I would say that color is still looking important but, rather than the vivid shades of last summer, we might see that spring-summer 2014 is a bit more muted, with more pastels. Prints are still important but they’re smaller and more tonal — watered down a little bit. Designers were using seasonal fabrics to play up the softer palette, as seen in the opening looks of Richard James — those pale blue jackets and blazers.”
Key Shows: “Burberry was a significant move and important to the British Fashion Council and LC:M. I liked the show, I feel like it was the strongest Burberry show that I have seen for a couple of seasons. Hackett was a great show. I liked the way it was styled, all Henley-on-Thames with striped blazers and mismatched trousers. I liked Margaret Howell, too. It was subtle and quite casual for her. Oliver Spencer’s show was strong and true to form for him with soft tailoring and mismatching separates.”

Trends: “Lots of prints and sporty looks and English tailoring. Sports meets luxury.”
Key Shows: “McQueen. The fabrics, tailoring, French laces and skull prints were extremely beautiful. I also like James Long’s sporty luxury. You can easily wear his hoodie sweatshirts for evening. I also liked the way he plays with fabric. Craig Green [from the Man show] is very talented and played with tie-dyes and fabric on shoes. And I liked the prints from Joseph Turvey [at Fashion East].”

Trends: “Wearable, sensible clothes — a buyer’s delight. A strong use of great color and classic shapes.”
Key Shows: “Burberry showed its strongest collection for a couple of seasons and it felt great to be in the middle of a field,” he said, referring to the show’s venue in the middle of Kensington Gardens. “Mr. Start and Mr. Hare was a brilliant presentation. Hunter Gather was all about newness and I really enjoyed the Op Art prints and the fact that they have introduced a women’s line. YMC for their trousers with drawstring hems, worn with bomber jackets. Paul Smith for his beautiful fabrics.”
Memorable Moments: “Burberry was a ‘pinch-me’ moment. Mr. Start and Mr. Hare’s show venue in Soho.”
Budgets: “Up in the double-digits.”

Trends: “Color schemes, blue on blue on blue, cobalt, royal, seafoam and navy. Pops of coral and salmon. But there were also earthy tones like stone and white or khaki and white. Mr. Start and Mr. Hare — blue on blue with a salmon shoe. Burberry’s seafoam shirt, salmon jacket and aqua tie and Rag & Bone’s graphic white on black print. We also saw a lot of texture and ‘geography’ in textiles. There is a lot of newness and surface interest in the garments.”
Key Shows: “I loved Rag & Bone, Burberry and Hardy Amies London.”