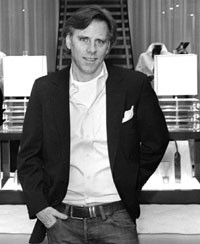 NEW YORK — It’s never too late for a comeback.

Promising signs of a stronger economy and heightened interest in new fashion labels have spurred a number of design stars who have left the scene in recent years — for various reasons — to take another crack at Seventh Avenue. To the list of new lines coming from designers Roberto Menichetti, Susan Dell and Tim Gardner, Ken Kaufman and Isaac Franco, Charles Nolan and the late Norman Norell, now add Victor Alfaro, a Perry Ellis Award-winning designer who confirmed last week he’s cooking up a new project under his name.

While most of them are coming back with designer-priced collections, there’s a twist to Alfaro’s return — he’s working with a brand and product development company and a major L.A. talent agency to develop a lifestyle concept for the moderate market, à la Martha or Isaac, but targeted to a Latino audience. Although Alfaro’s exact plans are still under wraps, sources said he is negotiating with two companies — one, a better department store, and the other, a broad-based retailer — and that Victor Alfaro products could be in stores by the fourth quarter.

By positioning the launch as specifically oriented toward Latinos, Alfaro is delving into a relatively new territory for fashion branding, especially for a label bearing the name of a designer, rather than a pop star. Kmart already has product under the Thalia mark and Kohl’s Corp. is launching a Daisy Fuentes collection in stores in March. Plus, Oscar de la Renta — who also hails from Latin America — is launching a moderate sportswear collection with Kellwood Corp. for fall called O Oscar. These lines are expected to generate revenues from $100 million wholesale at O Oscar up to $300 million to $500 million for the Thalia collections.

“It really is pretty much a virgin market from the point where I come in as a designer,” said Alfaro, who was born in Mexico. “This isn’t going to be just product with a star’s name attached. I’ve always had a different dynamic in my collections, and I do have something to say. Now I want to create a lifestyle brand for this growing population, coming from someone who knows that market.”

To develop the launch, Alfaro is working with Antsnpants, which is also currently working on the Halston collection with Bradley Bayou, on licensing and direct-to-retail programs. Additionally, Alfaro has retained the William Morris agency to present Alfaro in media and entertainment outlets, and possibly develop a style program for television geared toward a Latino audience and starring the designer.

“There is a hunger for an authentic voice for this population,” said Fred Siegal, a partner in the Philadelphia-based Antsnpants. “We think that media and entertainment is where most people are getting their fashion cues today, which is why we’re looking to develop a program with William Morris.”

Alfaro and Siegal claim they are on the verge of several deals with retailers, largely based on Alfaro’s reputation from his signature collections, as well as his work for Tse. He tied with Cynthia Rowley for the Perry Ellis Award in 1994, but nevertheless traveled a sometimes rocky road with his line, and he has not been as high profile since closing that collection in 2001 in a dispute with his former backer, Gilmar. Alfaro has since been spending much of his time in Los Angeles, where he has been designing for Wet Seal since August 2003.

Making the transition from his own designer brand to one that is moderate, he said, was not an issue.

“Tear sheets can only take you so far,” Alfaro said, noting that his product will aim to have an aspirational look at an accessible price. It will also cover a number of categories, with a key focus being on home because of the importance of family and home life in Latin American households.

“I’ve been taking some time off that I mentally needed,” he said. “But I happen to love what I do. For me, I also need to do it, or otherwise my brain doesn’t function. When you’re in the designer market, you just get so trapped with the realm of possibilities that you always keep wishing this or that is going to happen. Then you spend years working for it, and sometimes it still doesn’t materialize. These days, it’s getting even harder to make it as a designer, so going the other way for me feels like the right thing to do.”

Two other designers who were right up there with Alfaro on the hot scale in the Nineties are coming back with lower-priced collections. Tony Melillo, who had a signature collection after breaking with his partner in Nova, relaunched Generra in the better market for spring, and Patrick Robinson took over as women’s designer for Perry Ellis for spring. Both have been widely applauded in their first efforts, which have proven to be a success during early deliveries at stores including Henri Bendel for Perry Ellis and Barneys New York for Generra.

Menichetti’s new project, called Menichetti, is targeted to an even broader range of price points, from inexpensive T-shirts to pricy cashmere jackets — all under one label. That’s a concept that attracted financing from heavy-hitter Richard Fischer and his wife, Jeanne Donovan, an independent theater producer in New York. Fischer is chairman emeritus of Morgan Stanley, as well as the chairman of Menichetti’s company. Fischer is also a private investor in Jeffrey New York.

“This is a time when general economic conditions are back to being reasonable, but whether or not they are robust, we’ll see,” Fischer said. “But it’s not the gloom of 18 months ago, so I feel the time is right for a really classic, value-based collection that is well made with beautiful materials. Roberto is committed to building the value of this business, and that is why we’re here.”

One thing all of these designers have in common is that they are approaching their new business with ideas outside the norms of the apparel industry. Nolan, the former Anne Klein designer, is launching a signature collection as his own boss, targeting a handful of stores and looking for a retail space in the Meatpacking District, where he can also sell furniture and objects for the home. Dell, who closed her signature business last year, is launching Phi, with former Calvin Klein creative director Gardner as designer. They have described their approach as creating a collective environment for design, with occasional guests contributing ideas, and no set targets for its retail launch this fall.

Retailers have expressed a great interest in locating new voices and labels for their stores, as business picks up and customers are looking for more individualized collections. However, they said it is not the strength of a designer’s résumé that will ultimately determine their success, but rather the clothes.

“It’s a fine line you’re dealing with,” said Robert Burke, vice president and senior fashion director of Bergdorf Goodman. “The risk is that if you are too literal in bringing back a name, then it’s not always an interesting collection. As long as there’s intelligence behind it, it can be good. The competition is as tough as it’s ever been, and I just want to see good design.”

Julie Gilhart, vice president of fashion merchandising at Barneys New York, agreed. “It doesn’t really matter what name is on the label. It’s all about the clothes. If the person is talented, I feel very strongly that they can do whatever they want. When you look at Generra, the customer probably doesn’t even know what Generra was before unless they are truly a fashion hound.”