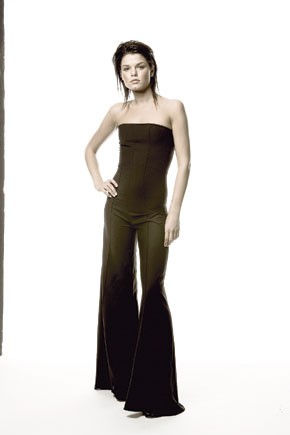 A decade as a stylist and personal assistant to some of Hollywood’s biggest divas prepared designer Ellen Aitken for the challenges of launching an apparel line.

“I learned about design, business, sales — everything, including how to find anything in any city in the world,” said Aitken, an Atlanta native who moved to Los Angeles in 1994 and worked for Madonna, Nicole Kidman and Cher.

With no formal apparel training, Aitken stayed true to her Southern roots, going by her childhood nickname “Ellie Mae,” which the Hollywood set found amusing.

“The most important thing I learned is not to be intimidated,” she said.

Starting as an assistant at Creative Artists Agency, she joined Universal Studios, became an assistant to Steven Spielberg and then Kidman during the filming of the 1999 movie “Eyes Wide Shut.” Later, she had a three-year stint with Madonna.

“I was responsible for planning everyday wardrobes, compiling outfits from boutiques and showrooms in cities all over the world,” she said. “Of course, the doors were all open.”

While in Paris frantically pulling together other designers’ looks, she began to sketch her own — starting with pants. Back in Los Angeles, working as an independent stylist, Aitken produced her own one-of-a-kind looks from 1998 to 2004.

She returned to Atlanta in 2006 and, with a financial backer in place, is launching Mizzae, a contemporary line, for fall. The 30-piece line has eight groups that can coordinate. In stretch wool blends and chiffon, colors include neutrals like tan and off-white, black, navy and white, with wholesale prices from $85 to $295.

Several trouser, jacket and blouse silhouettes create suit variations, with architecturally inspired shapes and asymmetrical lines. Though dramatic, with a boy-meets-girl theme, the line is intended to be more timeless than trendy, Aitken explained.

“I don’t want to design things that look dated in a picture five years from now,” she said. “The same pants I designed in 1998 are still wearable now.”

With a soft launch in seven specialty stores this fall, the line will be shown in regional markets in Atlanta, Dallas and Los Angeles, as well as the Designers & Agents trade shows in New York, Los Angeles and Paris. Aitken said she is aiming for $1 million in first-year sales.

“In the women’s market, there are a lot of the same looks, fabrics and trends,” he said. “This designer is talented, she has a good eye and she’s definitely doing her own thing.”

For Clint Zeagler, Southern culture is much more nourishing than the sugary confection that inspired the name of his line — Pecan Pie Couture.

The depth of his roots didn’t sink in until the rural Georgia native graduated from Georgia Tech and spent a year in Milan earning a master’s degree in fashion from the prestigious Domus Academy of fashion and design.

He was so homesick, he had his mom send over a bag of grits, but he found that he missed more than the food.

“Southern culture is deep and distinctive,” he said. “It’s in my heart. I discovered that I wanted to express it in fashion and everything I do.”

In 2006, he launched Pecan Pie Couture, which mixes down-home style with a hip, quirky humor and disarming honesty.

T-shirts, tank tops, scarves and accessories are produced in the South, from organic cotton and materials grown in the region. Wholesaling from $30 to $38, the line is carried in 25 Southeastern specialty stores, a few in Ohio, and in Bloomingdale’s at Lenox Square. Zeagler plans to expand with more sportswear in the next few seasons.

With two collections a year, T-shirts use phrases and embellishment for a whimsical take on Southern stereotypes.

His first group, “Excess,” juxtaposed the Southern Belle with Marie Antoinette. Next came “Wampum Disco,” for which he employed Cherokee Indians to do handbeading. “Marching Band Glam” featured T-shirts with slogans such as “Shut Up and Twirl.”

Southern women, he said, are an endless source of inspiration. “Besides my Nana, Dolly Parton is my hero. At a Dolly Parton concert, there may be a hillbilly conservative from the Appalachian mountains on your left and a drag queen on your right, and everyone is a little on edge. But when Dolly walks out, everyone forgets who they are and just sings along. That’s what I try to do with my clothes — bring people together and make them realize its OK to laugh at yourself.”