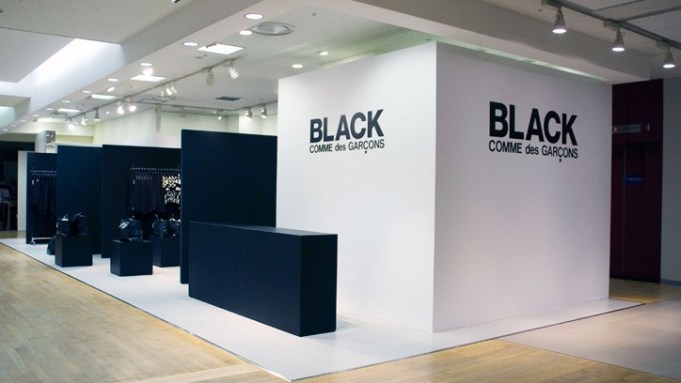 PARIS — Black is definitely a positive color for Rei Kawakubo.

Black Comme des Garçons — the Japanese designer’s new temporary “guerrilla” brand conceived as an antidote to the recession — has landed the iconoclastic designer’s fashions on the ground floor of two Tokyo department stores, a first for the company.

Monolithic, square black fixtures — where iconic styles such as sarouel pants and cutaway jackets hang — have been front and center at Mitsukoshi in Ginza and Parco in Shibuya since last week.

A total of 11 points of sale are rolling out this month and next, including freestanding stores in New York and Paris opening June 22, plus two-week pop-up corners at Barneys New York and Colette in Paris.

“The department stores have gone crazy with this idea,” Adrian Joffe, chief executive officer of Comme des Garçons International, told WWD, noting that initial sales in Japan are already 50 percent ahead of plan. He credited accessible prices (roughly half the company’s other collections) and a “speed merchandising” strategy that will see new styles arriving roughly every six weeks. Comme des Garçons is mulling adding men’s styles due to demand from stores, which include Boon the Shop in Seoul, I.T. in Hong Kong and Iwataya in Fukuoka, Japan.

Joffe characterized Black as a way to boost sales during the downturn, which has sent Comme’s revenues in Japan down about 4 percent this year. “Rei said she wanted [Black] to last as long as the recession lasts,” he said. “It’s turning morosity into positivity. We can’t just sit there and cry.”

A pioneer with temporary guerrilla stores, Comme des Garçons has opened and closed 31 such stores since 2004, with the latest, in Glasgow, Scotland, slated to go dark in September.

For example, Comme des Garçons plans to spend about 60,000 euros, or $84,000 at current exchange, to outfit the 500-square-foot Paris store on Rue du Perche in the Marais with air-conditioning and fixtures. Subway posters in Japan — an extreme close-up of a kohl-blackened eye or dark lips — publicized the launch there, while a giant billboard at Broadway and Houston Street will trumpet the 500-square-foot Manhattan unit at 10th Avenue and 17th Street.

Comme des Garçon’s 15 brands generated 2008 revenues of $180 million, and Black represents its most volume-driven venture to date. Joffe noted that quantities are in hundreds instead of dozens.