Hordes turned out for New York Market Market, which featured items the fashion house had collected for years. 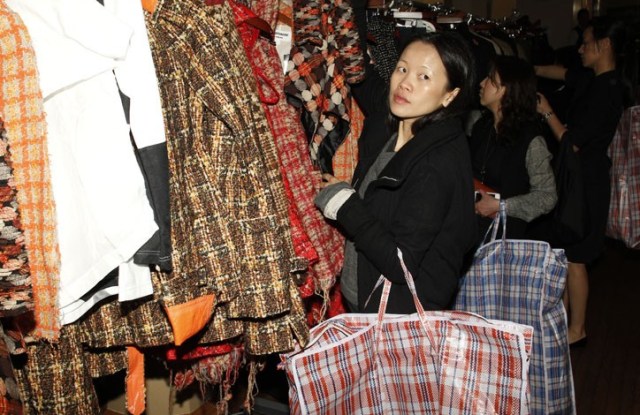 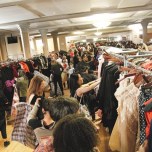 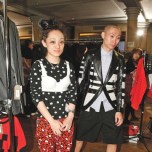 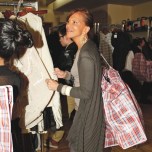 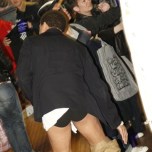 It’s 10 a.m. on Friday morning, and Mark Ghuneim, chief executive officer and founder of digital agency Wiredset, is second in line at the opening of Comme des Garçons’ New York Market Market, the four-day shopping festival of archival merch priced 70 percent off retail. With just minutes left before the doors swing open at The Cathedral on West 41st Street, he can’t stop gushing over his love for designer Rei Kawakubo. “I live and breathe Rei,” says Ghuneim, who paid an employee $100 to arrive four hours earlier, at 6. a.m., as a placeholder. “This is really the only fashion sample sale I’d ever go to. She is the epitome.”

But there is one thing he finds “just criminal”: the fact that he got beat out for the number-one spot by 19-year-old college freshman Hong Pak, who waited patiently since 3 a.m. — and yet describes himself as “a zero fan” of the label. “I just like to camp out,” explains the Borough of Manhattan Community College student. “I don’t really know that much about the brand.” Ghuneim shakes his head and interjects — “Criminal, criminal, just criminal” — before the clock strikes and they’re both finally shuffled inside.

If this event is any indication, the Comme des Garçons name attracts all types: young and old, the casual browser and hard-core acolyte and pretty much everyone in between. There’s January Hunt, 22, of Obsessive Compulsive Cosmetics, whose entrée into the Kawakubo world comes courtesy of filmmaker John Waters. “He’s really into the collection and talks about it [in interviews] all the time,” says Hunt. “That’s what got me into it, and I just sort of became obsessed.” Designer Wayne Lee, meanwhile, brought along her mother, boyfriend and sister. “I hope this will be an inspirational event,” she remarks. And then there’s the press department of a major contemporary designer, all of them playing hooky from work. “No pictures!” they cry out in unison. Self-described healer and artist Debra Rapoport, 65, in a hat she fashioned from palm leaves, says she’s just here for kicks. “I’m mostly a thrifter,” she notes, handing over a business card edged in puffy glitter paint. “At my age, there’s nothing I need.” But Gloria Chang, 22, puts it most simply: “I am a sucker for a sale.”

Yet this is more than just another sample sale in a long lineup of many this spring. This one includes merchandise from all of the Comme des Garçons brands, including Junya Watanabe and the now-defunct Tao Comme des Garçons — all of which goes back 15 seasons. Digging into the cavernous environs of the church is a lot like treasure hunting for the fashion obsessives. Among the troves: pieces from Tao Kurihara’s debut in 2005, Kawakubo’s breathtaking Broken Bride collection (also 2005) and Junya Watanabe’s Africa-inflected outing from 2008. It’s the first time the company has held a sale like this in New York. Other iterations took place in Paris, in 2004 and 2008, and in London, in 2006 and 2009. Adrian Joffe, ceo of Comme des Garçons International, writes via e-mail, “Since they are so popular and so successful, as well as being so much fun for everyone, we definitely hope to make this a regular event, every two or three years.”

For the collectors in the house — and there are plenty, including Lee and president of Universal Motown Records Sylvia Rhone — the event affords them the opportunity to bulk up their Comme des Garçons collections. “It was amazing to find old, classic things,” says Raul Arevalo, 42, director of men’s technical design at Club Monaco. “I go on eBay all the time to try and find things. Here, I ended up with four shopping bags. I spent about six grand.” His shopping strategy, he says, was to hit “the shoes first, then jackets and pants.” Other guests armed with a game plan included Rhone shopping buddy (and designer) Andy Khiani, who staked out the place at the friends and family preview the day prior. “I scouted,” he notes. “I pretty much saw where everything was laid out. It was pretty quick the way we did it. I knew exactly where to take her.”

And then there’s graphic illustrator Effie Liu, 25, who fought off other shoppers (including Rhone and Khiani) for a black puffer from Watanabe’s fall 2009 collection. Her approach was not unlike that of “The Secret.” “I saw this piece a long time ago when it was in the stores,” Liu says. “I was on a mission, I was putting it out there. It was meant to be — like finding that long lost love.”