Emilie Helmstedt is among the designers helping establish Copenhagen as a new sportswear capital. Her brand Helmstedt, this year anointed a LVMH Prize semifinalist, has made its mark with easy, soft clothes spun of cheerful prints that she paints by hand.

It’s this optimism that has lured shoppers seeking joy and comfortable clothes while locked down during the coronavirus crisis. Although many of the brand’s wholesale partners cancelled spring orders, Helmstedt says that her popularity on social media helped compensate for losses. Helmstedt’s e-commerce site exceeded four times its original sales projections during this period — helping the brand grow its sales overall, with most of its orders shipping to the U.S.

In the months leading up to Copenhangen Fashion Week, which kicks off this weekend, Helmstedt was faced with a new-world challenge: Erring on the side of caution in light of economic uncertainty while also offering fresh designs.

On Aug. 12 she will unveil a new collection titled “Emotions.” Taking a step back from recent, more elaborate runway presentations, Helmstedt will show a smaller collection of more commercial designs, still featuring her painterly prints. Her new pieces will be showcased outside in Copenhagen’s Kogens Nytorv, or King’s New Square, alongside a large sculpture installation that will travel throughout the Danish capital in the weeks thereafter. The sculpture — a series of abstract hearts — was produced by Helmstedt and her sister in their Christiania district workshop.

“I had a difficult time designing while all of this was going on. I felt like I needed to somehow to give a message with this collection, I had more thoughts going on, so the collection is about trying to stay present in the feelings we are all sharing and coming together based on our [mutual] feelings,” Helmstedt said.

She made some adjustments to the collection, which is, “very bright and pastel. Because of the virus, I tried to make a smaller collection. I don’t have added showpieces and stuff like that and I went in a more commercial direction for the styles. I’m scared for the virus and it’s important to have easy things to wear,” the designer said. 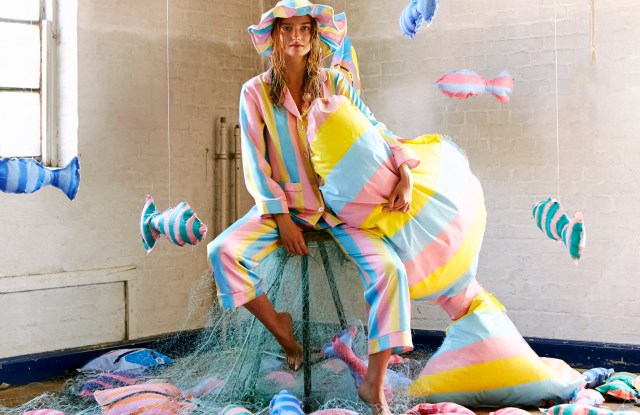 While Copenhagen Fashion Week will suffer a blow in attendance this season due to ongoing travel restrictions and collective anxiety, Helmstedt recognizes the power of imagery. She has reallocated some of her typical show budget towards shooting photos of the new collection for digital use to be used throughout the season.

Her new collection will be revealed on the heels of the designer’s popular “Staycation” summer capsule collection — a series of bikinis, sun hats and bike shorts, all printed with watercolor strawberry print that largely sold out within weeks. While Helmstedt’s typical designs range from $350 to $900, the Staycation line was priced much lower, from $95 to $145.

“We made the Staycation collection to offer a holiday feeling for people feeling stuck. So it was a holiday vibe even if they were in their living room. We priced it more affordably than I usually do, because of the coronavirus we tried to get down on the price,” she said. While the designer staged a Staycation pop-up in Tisvilde, or Denmark’s version of the Hamptons, she says that most of the collection’s sales came from the U.S.

Helmstedt herself has never been to the U.S., and is confounded by her popularity there. “I have never been there, it’s so weird. I think see many people in the U.S. are not afraid of colors – they like things to be bright and fun,” she said.

As such, the designer will now invest more funds in her e-commerce site, which was created on a whim via Shopify when her brand first started in 2018. She will also work on shipping logistics strategies to ensure easier delivery to the U.S. market.

“My goal is not to drop into a huge project — I want to make a stable business where we have a nice web flow, internal and external communications, good stock and all things. We are not jumping into something big, we will be working on what we have,” she said.

The brand currently has around 25 stockists worldwide, including just one in the U.S., that being Moda Operandi. In late September, Helmstedt will kick off a partnership with Browns in the U.K. on a capsule of homewear items – pajama sets, robes, silk turbans, lingerie and area rugs. “It all plays to the world situation right now of having something to wear at home,” Helmstedt said.