Raised in the idyllic countryside in Oxfordshire, England, Peter Copping is a calm, soft-spoken man: sure of himself, but hardly fueled by nervous energy. 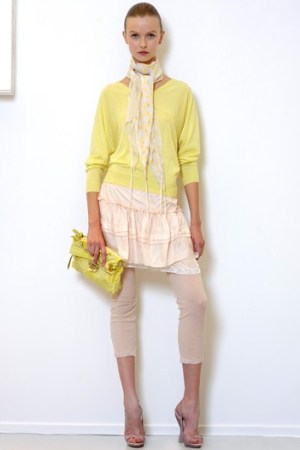 PARIS — Raised in the idyllic countryside in Oxfordshire, England, Peter Copping is a calm, soft-spoken man: sure of himself, but hardly fueled by nervous energy or flights of fantasy.

This story first appeared in the October 1, 2009 issue of WWD. Subscribe Today.

“I like wearable clothes,” said the new designer of Nina Ricci, who succeeded Olivier Theyskens in April. “I’m not necessarily into being too avant-garde.”

Indeed, his fascination with clothes and obsessive attention to detail extends to garments’ inner workings: how they’re finished; what the label looks like in color, scale and placement. “I always like to see the piece of clothing…to see what it’s like in my hands,” the designer said.

Copping, who joined Ricci after a dozen years as a chief design deputy of Marc Jacobs at Louis Vuitton, said for spring he would continue with the ultrafeminine theme he explored for cruise, with bows, lace, tulle and lingerie-like details all in the mix. He is slated to show his spring collection tonight at Ricci’s showrooms at 39 Avenue Montaigne, a mythic address that Copping immediately added to all its powdery labels.

The designer said Ricci’s hallmark of womanly romanticism, as opposed to brash sexiness, is perfectly in line with both his personal tastes and his conviction that feminine and light clothes are what most women prefer.

At Vuitton, “whenever we did more feminine-based collections, the sales were always incredible in the stores as opposed to the more austere or hard-edged things,” he said, while adding, “Obviously, one has to find a way to make that contemporary, modern and fashionable.”

By contrast, the fashion business lags behind, with estimated retail volume of about $25 million, held back partly by a revolving door of designers and, recently, weak sell-through. Copping is the fifth designer at Ricci in less than a decade. In addition to Theyskens, his predecessors included Lars Nilsson, James Aguiar and Nathalie Gervais.

But the arrival of Manuel Puig as Ricci president last year signaled the family firm’s commitment to build up the French house, much as it has transformed New York-based Carolina Herrera with a broader fashion footprint and network of boutiques, concentrated in Spain and the United States. Puig is also vice chairman of the parent company.

“[At Ricci], the base is small and there is a lot of potential to grow,” Puig said. “The name is well known everywhere.”

At present, roughly 40 percent of the Ricci business is in the United States, where key wholesale partners include Barneys New York, Neiman Marcus, Saks Fifth Avenue and Nordstrom. Puig said building up the brand’s profile in France, and improving business at the Paris flagship, are among immediate priorities. Ricci only has two other freestanding stores: franchise units in Moscow and Dubai. But rather than a big rollout of boutiques, Puig vowed a step-by-step approach as he and Copping establish the brand’s new direction and build up a stable of codes.

“My goal is to have a good sell-through. This is what matters,” said Puig, a multilingual dynamo who recently moved to Paris — only two blocks from Ricci — to spearhead a hands-on rejuvenation.

He praised Copping’s design prowess, professionalism and focus on products. “Peter fits very well with my way of thinking, my way of working,” Puig said. “Our idea is to build a brand where each collection is a step forward. You need to build a brand in a consistent way.”

The designer said he’s tickled by the founder’s drive, having started out as a seamstress only to found, in 1932 at age 50, an eponymous couture house that at its peak boasted an atelier of more than 400 employees.

While he allowed the name doesn’t conjure an iconic style in the way Christian Dior and Chanel do, “there’s a general spirit, one of lightness, femininity and romanticism” exemplified in the famous Ricci campaigns lensed by David Hamilton in the Seventies. “It’s important that it feels French as well,” he said.

There was no time to lose when Copping arrived at Ricci and had to pull together a pre-spring collection in about six weeks. While focused on occasion dressing and more elaborate and expensive pieces, “it was just to set the tone and show the direction I had in mind for the house,” he said, citing strong reaction from retailers such as Barneys, Villa Moda, Dover Street Market and a swath of Japanese retailers.

The designer confessed a weakness for Lurex and “quite an obsession” with silk crepe, a versatile fabric Ricci herself favored, and vowed it would become a standard in his design arsenal. Ditto for lace, an element he asserted could become a strong point of identity for the brand.

While Copping’s immediate priority is the ready-to-wear and accessories collections, he said he’s keen to add capsule lines of lingerie and wedding dresses. He said he also plans to inject more whimsy and color into the handbag range, as “the color of bags in the past was relatively sad.”

A low-key figure on the Paris fashion scene, Copping is a graduate of the Royal College of Art and Central Saint Martins in London. After working for several years in the design studios of Sonia Rykiel, Copping was recruited by Vuitton when the French luxury goods giant launched an rtw collection.

Despite his English roots, Copping said he’s long been seduced by Parisian style and French culture, and if he were not in fashion design, he’d probably go into the antiques or auction business. On weekends, he scours the giant antiques market at Porte de Clingancourt in search of gems — from the 17th century to modern times — to decorate his apartment in the 17th arrondissement and a country house near Paris. “I’m quite passionate about interiors,” he said, praising, for example, the eclectic mix favored by late shoe designer Roger Vivier.

His homeland still has a pull, however. “I love to go back to England for their country fairs and horse shows,” he said. Asked what he likes about horse shows, a smile spread over Copping’s broad face, and he replied: “I always look for that perfection.”