Cornelia Guest teamed up with Donna Salyers' Fabulous Furs for a capsule collection. 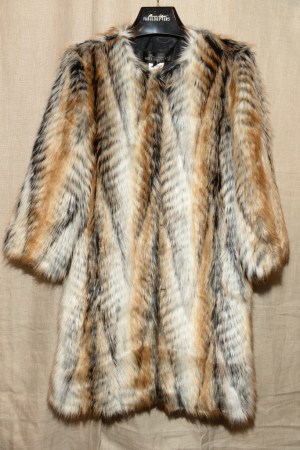 Cornelia Guest understands better than most the upsides of enduring.

Aside from using her animal-friendly beliefs to start her namesake accessories and lifestyle label, she put her vegan cooking skills to use in a cookbook and catering business. And now, the designer has joined forces with Donna Salyers’ Fabulous Furs to create a faux fur collection. Monday morning’s wilting heat had not diminished her enthusiasm for the project in any way, as she tried on various faux fur jackets and encouraged visitors at the New York Now trade show to do the same.

While taking a look at one of her recent collections and asking about future categories, O The Oprah Magazine’s Adam Glassman suggested Guest connect with Salyers. So she did, phoning the company founder and leaving a voicemail, Salyers’ daughter and the company’s wholesale director Amanda van Rooyen said Monday. “My mom was hitting the floor. She said, ‘Cornelia Guest?!’ Because she knew C.Z. Guest.”

The designer is the daughter of the late socialite C.Z. Guest whose impeccable style is known to have stood the test of time. Guest’s name also resonates with strangers, having been known as the Debutante of the Decade in the Eighties, appeared in feature films and posed in People for the Ethical Treatment of Animals’ “I’d Rather Go Naked Than Wear Fur” campaign. As the owner of eight dogs, a tortoise, a donkey and eight cats, Guest’s entrepreneurialism is rooted in her animal-friendly veganism. Given her upbringing, sometimes strangers may feel as though they know her without ever having met her. “People say, ‘How did this happen to you?’ What they don’t realize is that all my life I’ve had such a fascination with animals. But I never figured out how to use that creatively until I started my line of bags,” she said.

That sense of familiarity helps to spread her message via social media, she said. “I can go to all different places with it — I can go to society, to people who are vegans or animal-rights activists. I think I can cross all the boundaries of society especially through social media. My Instagram and Twitter followings are fantastic — even Facebook still.”

After meeting Salyers and learning about her company’s story, Cornelia Guest was all-in. Twenty-six years after Salyers started a sew-your-own fur coat business in the basement of her Cincinnati house, the now Covington, Ky.-based company employs 100 people, produces 60 percent of its faux-fur goods domestically and this season saw wholesale orders triple. For fall 2016, Guest’s five to 10 faux-fur styles will wholesale from $150 to $400 in better specialty stores and via the company’s Web site. In addition, as a brand ambassador, Guest will be featured in three upcoming catalogues and on Salyers’ site via “Cornelia’s Picks,” how-to-styling photos and a Q&A with Salyers.

Guest is working on “a hybrid of a memoir and a photo book” tentatively titled “Then and Now” with Rare Bird Books’ Tyson Cornell. (Her social media shows traces of the skills she gleaned for her last book, “Cornelia Guest’s Simple Pleasures: Healthy Seasonal Cooking and Easy Entertaining.” [Weinstein Books, 2012.]) She is also busy singlehandedly sorting through family heirlooms and will move out of her family’s expansive estate in Old Westbury, N.Y., in March. Guest explained, “Once you start getting into it, it’s fine. I’ve been finding things I haven’t seen in years. I found my dad’s old clothes, my baby dresses with the smocking….I think you can only do it yourself. When you sit in a closet, only you can be the one to say, ‘Yes.’ ‘No.’ The other day I found my mother’s photo albums from when they were married. There is one with all the telegrams she received.”

Like many of the vignettes in Guest’s life, that story has a back story. As Hemingway’s best friend and “Wolfie” in the author’s books, Winston Guest eloped with his future bride to Cuba, where they were married at Hemingway’s home by Enrique Rousseau, Lilly Pulitzer’s second husband. Eager as she is to visit Havana, Guest has auctions to plan. Starting in October, her father’s silver and some of Guest’s finds from her family’s home will be sold within various sales at Sotheby’s. She is also organizing another auction with Stair Galleries in the Hudson Valley.

When not working on her own company and numerous commitments, Guest said she “auditions all the time” for movies and studies acting with Sheila Gray. But she didn’t need this summer’s onslaught of Harper Lee publicity to be reminded of another larger-than-life character, Truman Capote.

“I think of Truman every time I drive by Bobby Van’s [Steakhouse] on the Montauk Highway [in New York]. He would love to go to lunch there. Then he would like to go to the horse show, because he always said there were such handsome men there,” she said with a laugh. “At that time, it was in a potato field in between East Hampton and Bridgehampton. So I would all of a sudden see him, little tiny terror with the hat on walking toward the ring. Yeah, I do think of him. He was a sweetheart.”

But for now her focus is on the Donna Salyers’ collaboration. Gesturing towards a faux-fur Arctic leopard throw, Guest said she was surprised being able to “recreate [what looks like] beautiful fur and have it not be an animal’s. It’s so authentic and warm. I wore them all last winter. And I am tough on them. I will put them on the chairs, put the dogs on them. I wanted to see how they wear,” she said. “If I’m going to put my name on something, I want them to hold up. I want people to be able to invest in something and have it for a while, and this does that.”