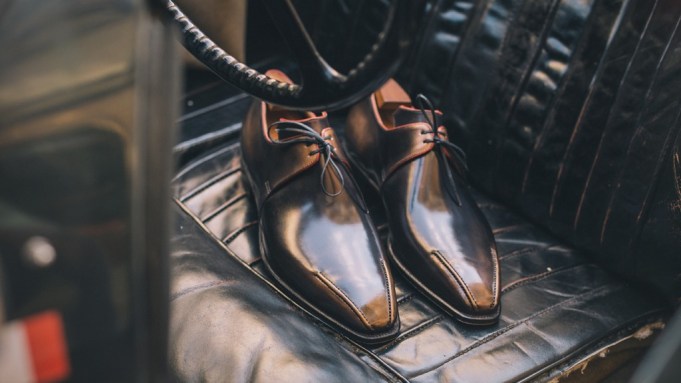 PARIS — Pierre Corthay is a busy man. In the last three years, the Parisian cobbler has been ramping up his retail expansion, setting up stores in Hong Kong, Dubai and London as he grows his luxury brand, which counts 36 doors, six of which are stand-alone units with bespoke services.

“Because we are small and independent, we need to be very cautious, so the rhythm of development is steady,” Xavier de Royere, the brand’s chief executive officer, said.

The former LVMH Moët Hennessy Louis Vuitton executive said he sees the most potential in China and the United States and will add a unit on Madison Avenue in 2015, the year in which Corthay will celebrate its 25th anniversary. For the moment, China is the shoemaker’s largest and fastest-growing market, accounting for 25 percent of total business, on par with France, followed by Japan at 20 percent. Having already set up its second store in Hong Kong in May, Corthay plans to add a shop-in-shop at Shin Kong Place in Beijing this November.

“A lot of people think that the Chinese enjoy big brands and big marketing only — if they don’t know a brand, they won’t buy it, the legend goes. But that’s not true. They are curious and willing to test,” de Royere said.

In the U.S., it has been mostly a matter of price. De Royere calculated that while three years ago a shoe costing $1,000 was a tough sell, today, models retailing for $1,500 are “no problem.” With the help of its new retail partner Neiman Marcus, which started carrying the brand in September, the company expects to double U.S. sales this year.

The label’s ready-to-wear line, which it launched in 2000, has posted sales increases of between 60 and 70 percent every year for five years.

In order to keep up with the growing demand, the shoemaker has invested in a new manufacturing site, partly funded by the French government eager to preserve Corthay’s craft; he is one out of only 89 craftsmen who have been awarded the title of a Maitre d’art by the French Ministry of Culture, a rare distinction honoring “exceptional technique and know-how.”

But unlike the new manufacturing site, which employs 25 people, production in the bespoke atelier, housing five artisans, has its limits. It takes up to six months for a pair of bespoke lace-ups by Corthay to be finished, and only 200 pairs get produced every year. “It’s very special. It’s always the same guy who takes the measurements, makes the fittings and delivers a pair of bespoke,” explained De Royere, adding that his biggest challenge is to find capable craftsmen.

The label’s bestseller continues to be the Arca, a two-eyelet lace-up with a demi-square-shaped toe sporting the house’s signature patina.

Corthay recently also introduced denim to his colorful collection, made by Japanese weavers in Kojima, according to an ancient recipe. Another novelty is the brand’s camel skin, which is extra-soft yet two-and-a-half times more stretch-resistant than box-calf leather and produced in partnership with a tannery in Abu Dhabi.

Following the launch of a small leather goods line in 2013, the cobbler is also expanding its accessories offer. “Our belt business is on fire,” said De Royere. “We only have four [styles], but they account for 15 percent of our business,” he revealed, adding: “We rather do a few, but do them well.”