Crowdsourcing Catching On With Fashion Pack

As crowdsourcing continues to gain force, some fashion companies are reaping the benefits of the democratic technology. 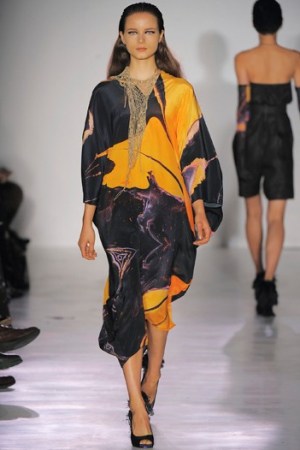 Grandiose as it might sound, the democratization of fashion is taking hold in a battery of incarnations.

This story first appeared in the April 6, 2010 issue of WWD. Subscribe Today.

As crowdsourcing continues to gain force, consumers aren’t just having their say about specific designs – whereas in the past, participants were content just to be part of the process, now more companies are compensating them monetarily, with prizes, discounts or other recognition. By definition, crowdsourcing is the act of taking a job traditionally performed by a designated agent (usually an employee) and outsourcing it to an undefined, generally large group of people in the form of an open call, according to Wired contributing editor Jeff Howe, who coined the term. The trend is huge in Holland, and it is also popular in San Francisco, New York and Chicago.

Yet crowdsourcing is largely underused in the apparel industry, even though many brands and designers are still struggling to figure out exactly what shoppers will buy.

“I keep thinking it would emerge in fashion, but it really hasn’t — especially given the success of Threadless,” Howe said.

With about 1.75 million unique visitors each month, Threadless.com has become a $38 million company by having consumers decide which designs it produces in graphic T-shirts. And when FashionStake.com bows this fall, shoppers will be able to offer their two cents about collections and buy stakes in designer collections that will lead to discounts, freebies and fashion show invitations.

Launched last week, Made.com, a London-based designer furniture site that only produces what consumers vote for and sells directly to them, is already looking into expanding the concept to clothing. By relying solely on crowdsourcing for its assortment, the site reduces the odds of having unsold inventory, eliminates the middleman altogether and offers voters discounts should they choose to actually buy the furniture. The merchandise is 50 to 80 percent cheaper than retail prices because there is no need for “huge markups,” said founder Ning Li.

“We think there is no better judge than the consumer because they are the ones who will be using their credits cards,” he said.

More than 10 up-and-coming apparel British designers have approached Made.com about collaborating and Li expects to test this sector within the next six months. They may also be showcased in Made.com’s installation during the London Design Festival in September. Li said he can understand why the concept appeals to the apparel industry. “The model is quite unusual. It offers a very good bargain in a crisis environment,” he said. “And designers can move easily from one idea to the next. They are much more capable of taking a risk [with design but not having to pay for it].”

Started with $3.7 million from an assortment of high-profile investors including Lastminutetravel.com’s cofounder Brent Hoberman, Made.com expects to break even this year, Li said.

Fashion Stake, meanwhile, was born out of co-founder Vivian Weng’s previous career in finance. “I helped raise money for a few designers and the big ‘ping’ point was in terms of funding collections. Fashion’s dirty little secret is that no one really has a lot of money — even people who are well-known and household names,” she said. “One designer’s first round of financing took 18 months to complete.”

Now a Harvard Business School student, Weng and classmate Daniel Gulati will launch Fashion Stake with no more than five designers including “Project Runway” season six runner-up Althea Harper. Through crowdfunding — a concept already being used in other industries by such sites as Kickstarter, SellaBand and PledgeMusic — the pair aim to help get designer businesses up and running.

By buying a $50 stake in a company, “supporters” will be given credits to put toward clothing purchases, as well as special offers like exclusive previews, showroom visits and fashion show invitations. Interestingly, case studies have indicated shoppers value having personal experiences with designers more than getting discounts, Weng said. Supporters will also vote for the styles they would like to see produced.

Designers will be selected through a “rigorous” application process, and candidates must have already produced collections and have an established fan base, Weng said. The upside for Fashion Stake-backed designers is that they will gain direct feedback from “their biggest fans and the people who will actually buy the clothes,” Weng said. In addition, more well-known designers, whom she declined to identify, will offer capsule collections on the site, giving them a chance to expand their categories without having to sign licensing deals.

Illustrating just how easy it is to take an idea and run with it in the Information Age, Threadless’ chief executive officer Jake Nickell started the company literally one hour after coming up with the concept by requesting design submissions on Dreamless.com, an online artist community. Threadless now receives 150 design submissions daily, which are edited by an in-house team before being uploaded to be scored by the online community. Each Monday, nine to 12 of the most popular new styles are released for purchasing and on Thursdays a limited number of reprints are offered. About 15,000 units are sold weekly but a one-day record of 200,000 units were sold during a 24-hour period when all goods were $9 on Black Friday last year. Threadless shirts are printed via two companies, Shirts Our Business and Sharprint.

Threadless collaborates with other brands on special projects, although it does not get paid for such ventures in order to protect artists’ copyrights. But the exposure alone is well worth it to many firms, Nickell said. Mountain Dew, for example, recently provided prizes for a Threadless design contest.

“If Mountain Dew tells its Facebook fans to check out this contest, that drives people to our site,” he said. “I can’t emphasize enough how important the social aspect of our site is. I would much rather have someone score a submission than buy a T-shirt, because once they do they get more invested in the site, and they will come back.”

Yahoo Inc. was interested in buying the company in 2006, and J.C. Penney Co. Inc., Target Corp., Urban Outfitters Inc. and VF Corp. have approached Nickell about collaborations, but none of the prospects seemed relevant enough and protecting artists’ copyrights is a priority, he said. With 50 percent of its sales generated internationally, Threadless will translate the shopping portion of its site into French, German and Spanish by April 26, and community-oriented ones will follow. It is also upping its overseas presence with more retail distribution, he said. With one Chicago boutique, the company is considering opening additional freestanding stores as well. This year’s sales are expected to increase 40 percent, Nickell said.

Threadless designs are now stamped on Griffin iPhone cases that are sold in Apple stores, and on Haviana flip-flops. The company is also developing API, an application interface program implemented to determine the vocabulary and calling conventions the programmer should employ to use the services. Another indication of the site’s popularity is Threadcake.com, a fan’s offshoot Web site that posts images of cakes inspired by Threadless designs. Last year, 600 people submitted entries for Threadcake.com’s first cake contest, which was judged by Mary Alice Fallon Yeskey, who often wears Threadless shirts on The Food Network’s “Ace of Cakes.” She will judge this year’s contest and the brand is trying to parlay that into TV coverage, Nickell said.

At the shopping site Ideeli, members chime in all the time about the company’s various events on its community board. “People get in there and comment away about the items they see and the value. All that information is then funneled back to our merchants,” said ceo Paul Hurley. “Feedback is a gift. It’s an amazing opportunity to hear what people think of what you did and to do something about it.”

Staffers also comb the posts regularly to see if there is a need for specific sizes, colors and styles. The site’s Shop Talk section is another sounding board for visitors to weigh in about which brands they would like to see introduced. Giving shoppers their say and building an online community have helped to nearly double Ideeli’s membership to two million since November. “At the end of the day, if you don’t have the right products and the right brands, it won’t save you. But the fact that people feel involved and that we’re listening is an accelerator — absolutely,” he said.

Just ask the design duo behind the A.F. Vandevorst label, An Vandevorst and Filip Arickx, who decided to launch a secondary collection this spring, after several friends mentioned they wished they could afford the couple’s primary label. Aptly named A Friend, the 25-style all-jersey line was developed after about 10 friends reviewed sketches, make suggestions and participated in fittings.

The company also gleans more tangible ideas from shoppers in its pop-up store in Antwerp, Belgium, which will close in a week or two when a Brussels one opens. Shoppers are encouraged to place their favorite old clothes in a bin with a note explaining why they love that particular item and how — if at all — they would change it. Friends have also tipped off Vandevorst and Arickx to former galleries, bakeries and other empty spaces for their stores including the Brussels one, which is a filmmaker’s home that is on the market. The pair just have to cover the utility costs and let the realtor show it as needed.

The New York-based label Risto relies on its “Risto girls” — 50 to 60 women who work in fashion, banking and other industries — to come up to its Spring Street showroom once a season to offer their input. Co-founder Alek Bimbiloski, who will work with the group next week, said their advice is invaluable. “We ask them things like, ‘How does this dress fit?’ or ‘How does the satin feel?’”

Maria Cornejo also takes an organic approach. Just by being in either of her two downtown stores regularly, she overhears what shoppers think of specific styles and takes note accordingly. Now the company is making a concerted effort to offer certain items in those boutiques first “to see how they work” and make any necessary tweaks in design before wholesaling them, said her business partner Marysia Woroniecka. The company did just that with a pair of pants this spring. “Now that they have had a few tweaks they will be perfect for pre-fall because we had them in the shop first,” she said.