Resort collections. They're time-consuming, costly and everyone is jumping on board. 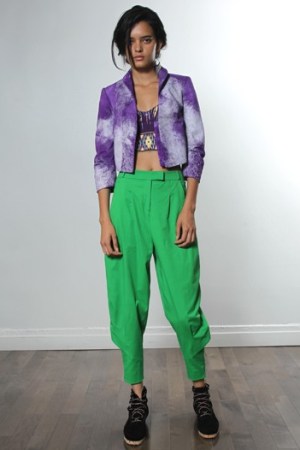 Another year, another resort story.

The season has been a buzzy topic for some time now, but a funny thing happened between Chanel’s blowout back in May and last night’s New York spectacle by Salvatore Ferragamo: A whole tidal wave of designers got in on the game, from established names (Elie Saab, Balmain, Isabel Marant) to young designers (Joseph Altuzarra, Prabal Gurung, Wayne Lee, Henry Holland, Rubin Singer).

Any one of them will acknowledge the move was a necessary one. Resort merchandise sits on the selling floor longer than any other season, retails at full price for a lengthier period and so on. The business sense behind it is a given — “This will stabilize our cash flow and keep on growing the company in an organic way,” said Altuzarra — but how much is it a case of everyone-else-is-doing-it peer pressure?

“With all the attention given to it, I think that designers realize they want to be a part of it,” said Colleen Sherin, senior fashion director at Saks Fifth Avenue. “They don’t want to miss out.”

Yet for those on the greener side, there may be risks to adding resort too soon. “The main goal is to not feel pressured,” said Gurung, who entered the category five seasons after launching his line. “The standard of success and everything has to be your own, not told by anyone else.” Although a resort collection was always in the game plan for Gurung, he said he didn’t feel secure enough to do it — until he nabbed $100,000 from the CFDA/Vogue Fashion Fund in 2010. And just because he added resort doesn’t mean he’s launching pre-fall. “I want to see how this goes,” Gurung said. “Don’t forget, just doing it and selling it is not enough; you have to be able to deliver, too.” As for his advice for young designers entering the field: “If it’s your first or second season and you’re doing resort already, you better have incredible financing.”

Those financial demands are something Jen Kao, who launched her company in 2007, is well aware of. She was already working on her spring 2012 collection when she decided to rewind and do resort.

“When you look at the scroll-downs of who’s doing resort, it’s increased tenfold,” noted Kao. “I really didn’t think about it that much in the beginning. But now it’s become something all my stockists really need. As a young designer, we’re starting to face the new retail and consumer reality of needing more deliveries.” And so Kao reworked her budget to incorporate the new collection, cutting into other parts of the pie, “like in fabrics for my spring and fall season,” said Kao, whose resort budget is now 40 percent of that of spring. “I really tried to mince here and there. It’s honestly like trying to find money under rocks.” On the plus side, the process gave her a clearer understanding of “where money was being wasted,” Kao said, adding that she plans to launch pre-fall next. “In the end, it’s a smart move.”

It goes without saying that retailers are in full agreement. “Resort is more and more important, especially for a store like us, where we have so many stores in Florida and the South,” said Saks’ Sherin.

Linda Fargo, senior vice president of fashion office and store presentation at Bergdorf Goodman, concedes that it can be a tough job for a fledgling designer, but a necessary one. “If they don’t have a resort collection, they lose their presence on the floor for too long a time,” said Fargo. “If you’re trying to establish an identity, to kind of disappear off the radar between deliveries is a long time.”

On top of that, consumers obviously shop more than twice a year, especially given the rise of e- and m-commerce, so keeping stock fresh is key. Not that retailers are suggesting designers take the leap into resort blindly. “You can always compromise and do a small collection,” Fargo continued. “It will still keep you in the game. It’s not necessarily an either-or.”

Consider newbie Yuna Yang, who many could argue is a prime example of launching resort too soon. She made her debut for spring 2010, runs a small, $240,000 business and is still largely unknown — yet for resort she presented a tight, eight-look lineup. “It was worth it,” said Yang. “I spent less than $10,000. I usually spend five times as much [on fall and spring seasons]. I could have saved the money and done a bigger show in September, but in this economy, I’m scared to just have two seasons. This gives me another chance to sell.”

Then there’s Bibhu Mohapatra’s approach. When retailers began asking about resort before he was ready to present it, Mohapatra, who launched for fall 2009, said no but agreed to test things out with a capsule offering. “I did a mini-collection of evening clothes for Bergdorf Goodman during the resort season last year,” said Mohapatra, whose sales grew 34 percent from 2010 to 2011. “It was just a few pieces, really, but I got a lot of positive feedback, so it encouraged me to do a resort collection this time. I felt confident I could put something together.”

But a retail stamp of approval was only part of the equation. Also key to Mohapatra’s decision was understanding his brand identity. “I needed to know what my product says to the ultimate client,” he explained. “That was the main parameter.”

That seems to be a criterion many agree on: Establish a voice before you break resort. “I think it’s confusing to the customer to all of a sudden come out with four different collections a year,” said Kao. “I would rather have people get to know you and trust you first, so when you have a pre-collection, they’re comfortable with it.”

Much of the reasoning here lies within a designer’s approach to the season. Resort is no longer limited to that off-to-the-Caribbean wardrobe (although wanderlust still appears to be a common inspirational hook for designers). Ohne Titel’s Alexa Adams and Flora Gill, for instance, see the season as a means to revamp their classics. “Now that we’ve kind of established a signature, we want to play with that for resort,” said Adams. “We wanted those great pieces that people want to buy now and wear now.” Ditto for London’s Peter Pilotto and Christopher De Vos. “Resort is what people expect from us, like our signature print dresses,” said Pilotto. And Gurung, too: “Pre-collections are, for me, about understanding what you’ve done well commercially,” he said. “People cringe when they hear the word ‘commercial,’ but for me it’s good. Carolina Herrera, who’s my mentor from the CFDA/Vogue Fashion Fund, said resort is where you want to sell, sell, sell; the runway shows are the ones that set the tone.”

That C-factor — and the obvious business incentives behind it — is part of the season’s appeal. Alexandre Herchcovitch said that after selling the majority stake of his company to Brazilian holding firm InBrands in 2008, he was nudged to do something slightly more accessible. So he did — but for resort. “I tried to add the commercial designs to the main line,” Herchcovitch says, “but we decided to separate it into resort.”

Fellow Brazilian Pedro Lourenço launched his hyper-engineered designs last year and had many questioning their real-world translations. Resort was his answer. “The runway show must be 70 percent image and 30 percent product. Resort is the opposite — 30 percent image and 70 percent product,” Lourenço said. “And when it comes to spring, I have more time to focus on the show and don’t need to do a giant additional collection of wearable pieces.” His resort lineup, as with many other designers, also offers slightly lower price points. It begins at $300 retail, compared with $600 for fall. Other firms cited anywhere from a 15 to 35 percent drop in their resort opening price points.

“To build a viable business, you need to engage in a resort and pre-fall collection so you’re competitive with the other brands that surround you,” noted Ken Downing, senior vice president and fashion director at Neiman Marcus. “Because these collections have a seasonless quality to them, the sell-throughs are really strong. They really help to build a strong business base. The idea that resort is just a fill-in between runway collections is no longer an issue. They’re being designed with a lot of excitement and fashion news, too.”

Or as Altuzarra put it: “I’m doing things I want to bring back, my bestsellers, but I’m also doing things I normally would not do. Resort is almost like a lab for me.”

Just those words seem to be a long-running mantra for designers — Phillip Lim introduced his intimates line for resort last year, while both Jeffrey Monteiro and Phoebe Philo unveiled their first collections for Bill Blass (2010) and Celine (2009), respectively, that season.

As for Tribune Standard’s Tawfik Mounayer, who has worked for Gap, Ann Taylor and Isaac Mizrahi for Target, and most recently served as vice president of design at Liz Claiborne, he’s launching resort on the heels of his fall 2011 debut. The designer pointed out that when he launched his first solo collection in 2000 (it closed three years later), he never thought about pre-collections. Now, it’s a no-brainer. “It’s less collection-driven as it is delivery-driven,” said Mounayer, noting he worked resort into his budget from day one. “And the more you deliver, the more times you get paid. You want dollars in and dollars out.”