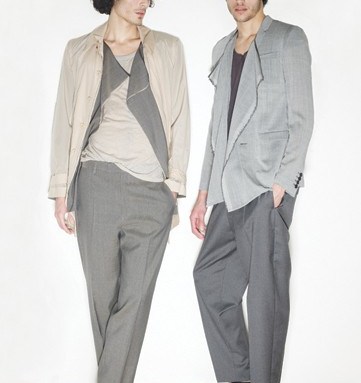 PARIS — When Kris Van Assche made his debut presentation for Dior Homme in June 2007, he knew the knives were out.

“People hate young success; they prefer to see you fall flat on your face,” said the 33-year-old artistic director of Dior Homme. “For my first show, there were around 1,000 people in the audience and around 900 bazookas pointing at my head.”

Van Assche’s apprehension was understandable. He had big shoes to fill following the departure of Hedi Slimane — Van Assche’s former boss at Yves Saint Laurent and then at Dior — after seven years at the label.

“I knew it would be tough, and it was, but you have to be aware of that,” Van Assche said. “It’s part of the price you have to pay.”

Armed with a thick skin and a talent at the cutting table, Van Assche, who launched his eponymous label for men and women in 2004, has steered Dior Homme away from his predecessor’s course and imposed his own modernist interpretation of men’s couture. He started by exploring different ways of addressing the suit that is Dior Homme’s signature.

“The very skinny structured suit…is obviously and definitely part of a very big historical fashion moment, but [it] is also very difficult to work with,” said Van Assche, who graduated with a degree in fashion design from the Royal Academy of Fine Arts in Antwerp, where Gothic moods, severe shapes and black dominated the fashion landscape.

Big ballooning pants and geometric-cut suits have been among Van Assche’s main propositions at Dior — and they’ve been met with mixed reviews.

With a subtle color palette and gently tailored pieces, the line is shaping up to be the most relaxed and light collection he has shown so far at Dior and suggests the designer is loosening up and fashioning the Dior Homme brand to suit his own taste.

“I needed those four earlier collections to come to this result. I have found a good balance between my personality and the personality of the house,” he added. “For my fifth show, there will be 1,000 people in the audience, but perhaps only 100 bazookas pointing at my head, so I’m getting there.”

He explained: “It’s about how a suit is composed, trying to respect the heritage, but making it more comfortable, soft and modern for today’s use. So no huge ballooning volumes, but a lot of lightness in more conservative volumes.”

Take, for example, unlined two-button jackets in cotton so light they look transparent worn over loose tank tops, or a gray herringbone jacket layered over a lining-like waistcoat with visible selvage paired with roomy trousers slightly shortened to show off suede ankle boots.

Given Christian Dior’s couture roots, Van Assche decided to exploit the house’s atelier to its fullest potential for spring.

“I have always insisted on the importance of the atelier. Even more so than creating volumes, you need the atelier to create structure, so I guess it’s a more intelligent way of using their knowledge,” he said.

Walking through the atelier on Rue François Premier, Van Assche passed men and women — some with more than 30 years’ experience — hovered over sewing machines or adjusting a shoulder on a mannequin to the very millimeter for his upcoming show.

“They have seen designers come and go, some for over 30 years — they’ve seen much bigger designers than I am,” Van Assche said. “In the end we are all working together to create beautiful clothes.”

“He is a young man who has a talent, who has an eye, who has a sense of tailoring and a sense of fashion. He brings us ideas and innovations,” Toledano said. “But what’s important is the triangle of creative team, designer, and management and merchandising. They are the pillars of retail.…It’s a dance between the designer and his team, and it’s necessary to find a good rhythm. But there is not a single designer who finds it immediately. It takes time to organize effectively and for that reason it gets better and better.”

Dior Homme accounts for 12 percent of the group’s sales, according to Toledano, and is a “growing category,” one with “great potential,” especially in Asia. In Japan, for example, sales of men’s wear count for “more than 20 percent” of the business, which Toledano believes could be the case for the rest of Asia. “The men’s market in Asia is extremely important and we are developing there.”

“Men want the codes from the brand and the integrity of the product,” Toledano added.

Integrity is something Van Assche learned at home from his 88-year-old grandmother Josephine Van Assche, who is a regular in the front row of his shows.

“She would never have tea on just an ordinarily set table,” Van Assche recalled when he was growing up in Londerzeel, Belgium, just north of Brussels. “There would be flowers and cakes. She always tried to teach me that in life you can do things in two ways: You can either eat or you can have a nice dinner.”

Van Assche chose to dine, and he wants customers to do the same.

One of the biggest changes he is working to impose is a shift from androgynous looks to a healthier masculine aesthetic. (The designer traveled to Buenos Aires and São Paulo for the casting of his upcoming show.)

“Men’s fashion has gone from macho men to androgynous boys. Now there is more of a balance, which I feel very comfortable with — something that has to do with being athletic and which is neither too skinny nor too beefy,” he said.

“I don’t like the trashiness. I don’t want junkies dragging themselves down a catwalk. That is not the message I am trying to send for a couture house. Trashiness has been the excuse for fashion to be taken as something closer to art,” he added.

Instead, Van Assche is focusing on beauty.

“I’ve never wanted to get lost in concepts or big themes. No one seems to concentrate on whether a collection is beautiful. Beauty comes from a certain pride of walking with a straight back and your chin up.”