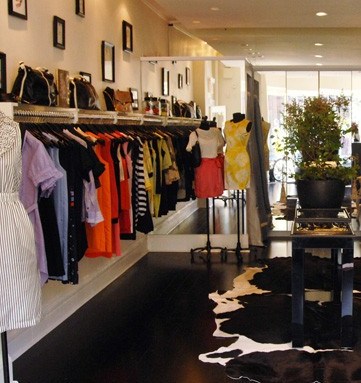 BOSTON — Where others retrench, Cynthia Rowley sallies forth.

The designer, who once called optimism “the core of our brand,” came here Thursday to christen her company’s sixth U.S. store, at 164 Newbury Street. The firm readied the 450-square-foot space in record time, opening for business in soft-launch mode just 13 days after signing the lease.

“This is going to be an active year for us — new stores, new licenses, new collaborations, new territories for retail,” Rowley said, although she declined to share details beyond a pop-up store opening in Montauk, N.Y., in mid-June.

She hinted that at least one of this year’s store deals could be in partnership with a nonapparel retailer.

“Our unconventional-yet-optimistic strategy is to ramp up retail expansion at home and abroad in unsteady times,” said brand president Peter Arnold, who traveled to Boston with Rowley. He called Newbury Street “a compelling shopping corridor” and said the student population and art scene were draws for the brand.

“We have been looking to open a store on Newbury Street for some time and identified a location last year,” he said. “Happily for us, since then, the commercial real estate market moved in our direction.”

Rowley officials declined to give first-year volume for the Boston unit.

The store sticks to the simple black-and-white palette of other U.S. units, but plays up the town house elements of the once-residential Newbury Street. A footstool is pulled up to a fireplace dressed with brass andirons and flowers on the mantel. Rowley’s whimsical illustrations from her latest book, “Slim: A Fantasy Memoir,” are framed and hung on walls. The book, the least costly item in the store, is sold for $30, and items go up to nearly $600 for a limited edition beach cruiser bike in a Rowley-designed print. The store’s threshold is decorated with nailheads spelling out “Welcome” as customers enter and “Thank You” as they leave.

As with earlier doors, the Boston store has its own Facebook page. Thus far, a lilac shirtdress in tumbled taffeta ($295), and a $550 cropped leather jacket, which Rowley plugged on the “Today” show, have been popular.

The designer hosted a private cocktail-hour styling session in the store, then hit the Liberty Hotel around 10 p.m. for Fashionably Late, a weekly after party series hosted by a rotating cast of fashion brands and retailers. For her turn, Rowley brought Queens indie boy band The Beets (featured in her fall 2009 Fashion Week Taxi TV video, “Musical Chairs”) as a warm-up act to models strutting the iron balconies of the former jailhouse-turned-hotel in select fall looks.