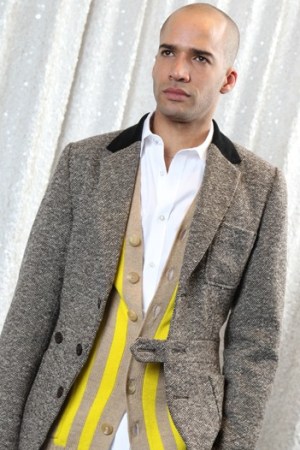 Cynthia Rowley is giving her men’s wear line a makeover, with a new e-commerce-based selling model and by rebranding it as Mr. Powers — named after her husband, Bill Powers, a gallerist and judge on Bravo’s “Work of Art.”

This story first appeared in the April 7, 2011 issue of WWD. Subscribe Today.

The new incarnation has an expanded assortment and a more cohesive feeling than the small group of designs Rowley previously offered in her six stores. The fall collection will be available on a dedicated men’s microsite at cynthiarowley.com in late July, in addition to the company’s stores in New York City, Chicago, Boston, Charleston, S.C., and Montauk, N.Y.

Rowley is also targeting a small number of wholesale accounts to carry the line.

“We’ve always had a sprinkling of men’s wear available, but we wanted to make a more concerted effort with it because of the greater visibility it’s gotten from Bill wearing the clothes on ‘Work of Art,’ ” said Rowley. “He needs more stuff to wear and people keep asking for it.”

Powers, who is the co-owner of New York’s Half Gallery with Andy Spade and James Frey, will return as a judge on the second season of “Work of Art” later this year. He is not involved in the design or concept of the men’s collection, however. “We are only using him for his name and his fame,” said Rowley with a laugh. “He might say what he wants, but by then it’s probably too late.”

Earlier in her career, Rowley produced full men’s wear collections, complete with runway shows during New York Fashion Week. In 2002, she was nominated for a Perry Ellis Award for best new men’s wear design talent. However, the men’s business dwindled to a fraction of the brand’s sales, which now total about $150 million, including all licenses and more than 50 shop-in-shops in Japan and Taiwan.

“We’re only doing tops, no pants, because we think everything looks better with jeans — and guys already have their favorite jeans,” explained Rowley.