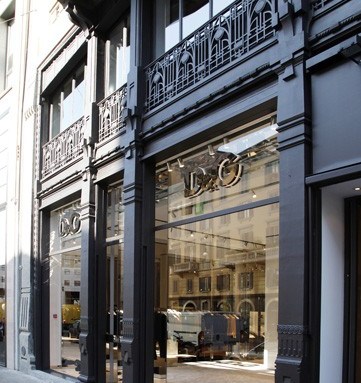 MILAN — The evolution of D&G from sassy to classy has culminated in a revamped store concept revealed with the reopening of the brand’s Milan flagship earlier this week.

The new space, whose renovation cost $5.8 million, is now “simple and versatile, warm and luxurious without being intimidating,” said Domenico Dolce.

That’s because the disco flash of neon bright walls and dark gleaming surfaces has been replaced by a polished look obtained with a soft mix of warm neutrals and dull or shiny metals.

To create what Stefano Gabbana calls a “new and prestigious box for D&G,” the designers teamed up with BAM design studio.

The revamped store format crowns a new course for D&G, one started in 2006 when Dolce and Gabbana took the production in house. Since then, they expanded the brand beyond flashy T-shirts, ripped jeans and logoed belts and elevated its quality. “We have invested both creative and economic resources in the growth of D&G, which has grown and changed while staying coherent with its positioning in the market,” said Dolce.

In the past three years, D&G sales have averaged eight percent growth annually. In the fiscal year, which ended March 31, the brand’s revenues reached 706 million euros, or $1.02 billion, accounting for 44 percent of Dolce & Gabbana Group revenues. Cristiana Ruella, director of general affairs, expects 2009 sales to be in line with last year’s. Figures are converted at current exchange rates.

The remodeled store also coincides with a new logo stripped of Dolce & Gabbana under the signature initials and new, less sporty uniforms for sales people — black dresses and cardigans for females and white shirts, ties and drawstring trousers for men.

The designers focused on every nook and cranny of the 6,523-square-foot space. For example, the hooks of the matte silver hangers displaying fall’s offerings are hidden under the metal racks. “There is extreme attention to each detail, from the color choices to the sound system because we wanted everything to be perfect,” said Dolce.

He and Gabbana even created a live rendering in Legnano, where the factory is headquartered, to make sure there were no surprises when turning the designs into actuality.

Categories such as eyewear, timepieces, jewelry and footwear, are displayed in showcases while denim and children’s wear have dedicated areas.

Positioned centrally is what Gabbana calls a “cage,” or a rectangular area delineated by squared poles with a cluster of small frame TV screens on one side. It will be used for anything from art installations to the promotions of a special bikini, said Gabbana.

A sweeping steel, marble and glass staircase leads to the men’s wear department on the first floor.

Currently there are 101 D&G stores worldwide, with 16 openings planned for the first half of 2010 in locations such as Moscow, Baku, Budapest Paris and Chengdu.

Over the next 24 months, the company plans to makeover all its existing stores covering a total surface of 216,000 square feet, said Ruella.