Higher-than-expected unemployment and general doom-and-gloom had an impact on fashion and vendors at the Designers & Agents show. 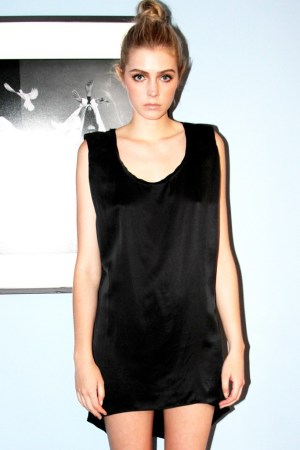 That’s been the theme for the year so far: Things got off to a good start with decent economic news and early spring temperatures encouraging consumers and spring sell-ins, only to flip back to higher-than-expected unemployment and general doom-and-gloom, particularly with the volatile euro zone.

All this has had an impact on fashion, and vendors at the Designers & Agents show, which ended its three-day run at the Starrett-Lehigh Building on May 9, for the most part echoed the sentiment. That’s not to say that there wasn’t business to be had. After all, stores need to buy merchandise to continue to operate. However, vendors strategized in new ways to better serve retailers.

Minden Chan, owner and designer of the namesake label, evolved his collection, previously focused on T-shirts, to include a selection of dresses. Top sellers at D&A included a sanded silk charmeuse dress with a ribbed cotton lace hem for $172 wholesale — a price point the designer was keen to maintain. “The goal is to keep retail under $400,” Chan said. “Many people are hesitant when it’s over $400. I really don’t want price to be an issue.”

Amber Rush, sales manager at Candela, agreed, adding that stores were looking for immediate trends. “People are still playing it safe, and don’t necessarily want too much design inventory,” she said. “Therefore, we’ve seen a lot of reorders for spring.” Bestsellers included a Battenburg lace minidress for $98 wholesale, and a floor-length gypsy skirt, available in solid colors for $130 and $140 for a floral-print version.

This being a fall and holiday market, there is typically a strong emphasis on accessories, which lend themselves to gift-giving, and dresses for holiday festivities. “There’s a lot of color and texture,” observed Barbara Kramer, who produces D&A with Ed Mandelbaum. “I feel things are moving into a more feminine place again, and there’s a lot of transparency.”

A highlight at the show was the Green Room, which is now in its sixth year. It featured several innovative ways to tackle sustainability in fashion, including Terra New York, a line of cool and colorful raincoats, which was founded by Yurika Nakazono and Marie Saeki with designs that are biodegradable, and priced at wholesale from $120 to $150. The space also featured the Bazsarózsa line, which brings the notion of eco-friendly garments to innerwear with soft bras, camisoles and panties designed by Enikö Bázsa using organic cotton jersey.