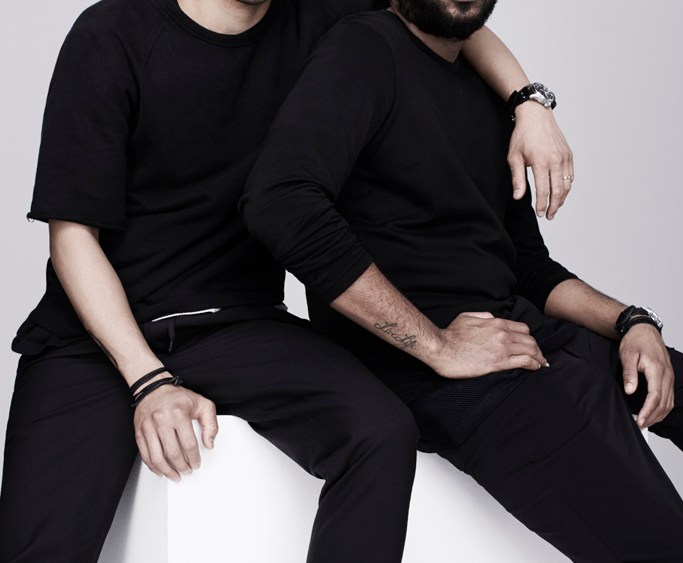 The first DKNY women’s collection designed by Chow and Osborne will be unveiled in September during New York Fashion Week. They will begin with women’s wear before turning their attention to the brand’s men’s wear.

Jane Chung, executive vice president of design at DKNY, who has been there since its 1989 launch, will be transitioning out of the brand over the next month. Her future role at DKI has not been determined. Mary Wang continues as president of DKNY.

The team represents a new creative configuration for DKNY, which seeks to build a seamless brand experience across design, digital, marketing, architecture and brand messaging.

Brown said she sees significant opportunity for DKNY. “There’s been such an explosion of that whole contemporary market globally. We’re sitting on a brand that has fantastic distribution and incredible brand recognition. We think there’s an opportunity to put a lot behind it to reinspire and reinvigorate it. That was the purpose of this step, to look at DKNY with fresh eyes and reach the full potential,” she said.

As for Chow and Osborne, Brown said, “I can’t think of designers who represent authentic New York in a better way,” adding that, besides being New York-based designers, “they’re born and raised New Yorkers.”

Asked where Donna Karan herself fits into the new structure, Brown said, “Donna is the founder of the brand, and is the chief designer of DKI. Donna will continue to be the creative director of Donna Karan Collection and she’ll definitely support DKNY in an advisory role and will support this new creative team.”

Brown said the company looked at a lot of candidates before deciding on Chow and Osborne. “It’s a huge decision for us, and it’s not a decision made without serious due diligence,” she said. “Where we feel we landed is exactly where we feel we should be.”

Muelas will be in charge of all areas of brand image, marketing and creative services for DKI, as well as all digital platforms and e-commerce. At Apple, where he served as creative director of worldwide marketing communications, he was most recently in charge of leading the global brand marketing initiatives for Apple Watch. Earlier, he held creative and executive posts at Creative Artists Agency in Los Angeles and Wieden + Kennedy in Amsterdam, where he developed creative campaigns for such brands as Nike and Coca-Cola.

His recruitment from Apple marks a coup for DKI, especially since, in recent years, Apple has been recruiting senior fashion executives rather than the fashion world hiring the tech brand’s top talent. Previously, Apple named Angela Ahrendts, former ceo of Burberry, as senior vice president of retail and online stores and Paul Deneuve, previously ceo of Saint Laurent, as vice president of special projects.

Queried about the status of Trey Laird and Laird & Co., which is DKI’s ad agency, Brown said, “Hector, as chief image officer, will oversee all of our agencies and all our agency relationships, including Trey Laird. Trey’s a great partner to this brand, and he’ll work closely with Hector. It will be Hector’s role to oversee that whole area,” she said.

“Hector brings incredible background working on some of the most iconic brands out there. He is going to really examine this brand, and say what is the brand message we want to send, what is the brand focus and who are the very best partners to get us there,” said Brown.

As for the growth strategy for DKNY, Brown said, “We see opportunity in growing the retail footprint globally. We also have unbelievable partners and have an amazing franchise relationships throughout the world, and we see big growth in digital and new platforms. Wholesale is a critical channel for DKNY and it will continue to be.”

Pierre-Yves Roussel, chairman and ceo of LVMH Fashion Group at LVMH Moët Hennessy Louis Vuitton, which owns DKI, said the group has been looking at the American designer brand for 12 years and never made any significant creative changes.

“We’ve been thinking of reinvesting in the brand and extracting the full potential of the company,” said Roussel. He said Brown was hired as ceo earlier this year to shape the brand’s strategy.

“DKNY is a very powerful brand and it’s where we do most of the business,” he said. “It’s a global brand, and it’s an area where we knew we had to put some new energy.”

He noted that most of the licensed businesses at DKI are for DKNY. More than half of DKNY’s business is done outside the U.S. Roussel noted that LVMH has underinvested in the contemporary segment of the business “and we’re interested to invest more in that segment of the market.”

He declined to comment on whether LVMH plans to invest in Public School’s business. “It might happen, but that’s something that’s not on the agenda for now,” said Roussel.

Brown has been working with the designers to make sure they have enough time and the resources to devote to DKNY with the responsibility with their own brand. “We’re very careful that everything works for everyone. We don’t want one project to happen at the expense of another one,” he said.

Asked if any changes are planned for the Donna Karan brand, Roussel said, “This is the plan to work on DKNY. That’s the priority for now, in this first phase.

“It feels like the right casting at the right time,” he added.

Donna Karan said she started DKNY in 1989 with the goal of creating a brand “that captured the very best of New York,” and bringing that energy to the world. “Now is the right moment for its evolution,” the designer said, adding that she is looking forward to its “next chapter.”

Chow and Osborne founded Public School in 2008 with the goal of merging street sensibilities with high fashion and won the CFDA Award for Menswear Design in 2014. They were the recipients of the CFDA/Vogue Fashion Fund in 2013 and won the inaugural International Woolmark Prize for men’s wear this year. They have been nominated for the CFDA Award for Menswear and the Swarovski Award for Womenswear this year.

The designers met while working at Sean John more than 10 years ago. After they both left the company, they collaborated on a private-label line for Arrive, a store Chow had opened in Miami, before deciding to open Public School. They were part of CFDA’s inaugural incubator program, which supports young brands with low-cost studio space and mentoring. Today, Public School’s retail accounts include Barneys New York, Bloomingdale’s, Odin, Stanley Korshak, Holt Renfrew, Shopbop.com and Mr Porter.

In their new role, they will be in charge of all DKNY collections, effective immediately, dividing their time between both companies.

Osborne and Chow were unavailable for comment, but released a statement saying, “We both grew up in New York and DKNY has always been part of the landscape of this city in our formative years as designers and as New Yorkers. It is one of the brands that helped change the game for us and for American fashion. It evokes everything our city was always about — energy, disruption, new thinking and transcending all boundaries. We are extremely proud and excited to be joining the company and to contribute to the next chapter of DKNY, one of the most iconic American brands created by Donna Karan, a true inspiration.”