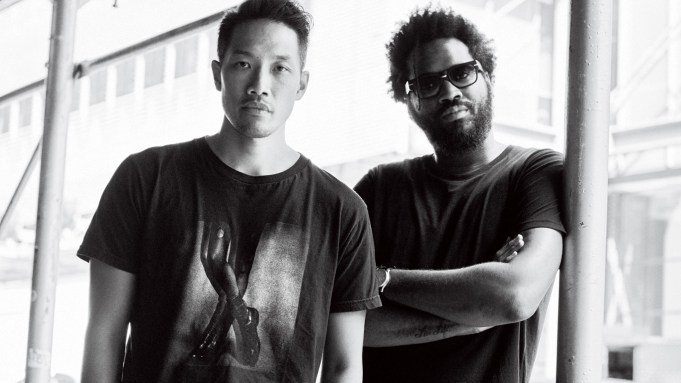 DKNY is heading to that most exciting, enticing and unknown of places — what’s next. Shepherding its path, designers Dao-Yi Chow and Maxwell Osborne acknowledge they don’t have it all figured out. But one thing they’re sure of: Their customer is not a girl. “We always refer to her as a woman,” Chow tells WWD.

A distinction hardly worth noting in most walks of life. Although in fashion, Chow takes an unintentional shot at his milieu’s love of the brand “girl,” swathed in eternal, impossible adolescence, even at lofty levels — Gucci Girl, Marc Girl, Versace Girl. Eschewing such fashion speak, he and Osborne prefer more accurate language.

The woman of their emergent DKNY is in a perpetual state of progression and discovery; though accomplished, she hasn’t fully arrived. “Our customers are our peers, everyone who is still on their journey, people who are successful but they don’t feel like they’ve reached it yet,” says Osborne, who despite a reputation as the quieter side of the design team is, on this morning, as loquacious as his partner. “They’re still on their journey, working every day. They still want to look great doing it.”

The identification of this evolving adult customer is crucial. The designers maintain that in recent years, DKNY went off course in search of an expanded customer base. “The trajectory for the DKNY girl is that she had been getting younger and younger — and younger,” says Chow. “But it didn’t feel authentic to what the brand was, it was too young; it was just too young for us.” And though he avoided the word, implicit in his conversation, she’d become boring. “The modern woman we envision has just started getting into her own in terms of career, starting a family, her life is multilayered with different dimensions. When you’re young, it’s not as complex. For us, those complexities and those dimensions are the interesting pieces in determining what she wants to wear.”

The designers are hardly starting from scratch in their new commission. They arrived at DKNY determined to avoid a deep archive dive lest they risk suffocation by a storied past. Yet they discovered a foundation and brand identity that they not only couldn’t avoid, but also liked and to which they relate. “As the process developed, it became evident that we couldn’t really deny the roots of the brand because they were so strong and still so relevant to this day,” Chow says.

To some extent, Donna Karan and Jane Chung, Karan’s press-shy design collaborator at DKNY whom Karan credits with forcing the creation of the brand, invented the space now known as contemporary. Or more accurately, the two women identified a young adult customer who needed clothes for a busy, multifaceted life and created not only a collection to fill that need, but also an arena that others would eventually flood. While DKNY launched in 1989 in the now all-but-defunct bridge classification, its imagination and range were more akin to what would later emerge as the contemporary market.

From their shared perch as founders and creative masterminds behind Public School, Osborne and Chow understand that young adult space of personal and professional development. Their Public School positioning is one of street cred and aspirational attitude that has, during their swift and celebrated ascent, proven them masters of the moment if not necessarily of major fashion. For all their uber cool, their clothes work the cusp of basic, demanding attention partly on the strength of their smart, pragmatic design and partly on the designers’ image inclusive of their multicultural good looks. Both are first-generation Americans, Chow, Chinese, raised in Queens; and Osborne, Jamaican, raised in Brooklyn. They look like the 21st century.

It’s their mandate to redirect DKNY into their vision of a vibrant 21st-century fashion force that, somewhat to their surprise, will not involve siphoning the sartorial baby out with the bathwater. Rather, they’ve uncovered unanticipated points of convergence with Karan in the duality of strength and sensuality and in frequent invocation of one of her favorite themes — the notion that fashion is itself a journey, and part of life’s greater trip.

“That was a surprising discovery for us,” Chow says. “The ideas of strength and sensuality are the pillars of what Donna was, and for us, those ideas were ringing true. You couldn’t really suppress them; they kept coming out. That’s a testament to her, that from the beginning she was able to create this timeless idea. Now, how do we make it new and how do we make it our own? It really is this ever-evolving journey for this woman.”

The designers are negotiating their own journey as well, one that has included at least one recent visit with Karan during which they discussed their developing vision with her. They say she liked the direction and gave positive feedback. Still, until Sept. 16 when their DKNY launches a much-anticipated presentation during NYFW, the brand identity hovers in that limbo between past and new regimes. With less than a week to go, they’ve avoided what for many companies is the awkwardness of transition by running a single image in all current marketing and advertising. The photograph from a 1994 DKNY campaign shot by Peter Lindbergh features a model in small scale within the cast of a mighty building at the intersection of Williams Street and Exchange Place in the Financial District. It feels familiar but not dated, the intersection of then and now.

With that single image heralding respectful change — the photo also acts as a placeholder on the firm’s suspended social media outlets, which will relaunch during the show — the first step of DKNY’s new creative direction was to rethink the logo. The designers embraced the challenge, investing in it with deep consideration. While it’s unlikely that anyone up the LVMH food chain — DKNY chief executive officer Caroline Brown, LVMH Fashion Group ceo Pierre-Yves Roussel and ceo Bernard Arnault — cared a whit about the nativity of Karan’s successors, there’s a certain romance, or at least a charmed coincidence, to the fact that, like their house founder, the designers are proud New Yorkers. Their love for the city and the inspiration they find in it come through very specifically in the new logo design. The goal, Osborne says, was to make DKNY “its own icon.” They chose Franklin Gothic, “a bold American font,” for the lettering, which is positioned as a horizontal block, bracketed by two other blocks formed by a thin black ribbon threaded through slits, the ribbon signifying sensuality. Together, the three read as graphic dashes intended to reference the markings on city streets. The logo will get its first major exposure in the invitations to the DKNY presentation.

Fashion loves such visual suggestion, which typically extends to a well-thought-out image board in the design period leading up to a collection. Chow and Osborne’s is covered with urban references. Photos of young women in unfussy tailored clothes worn with attitude referencing an urbane vibe, while Sol LeWitt’s aerial-view photographs with sections sliced out make more literal reference, “powerful, iconic images of pieces,” according to Chow. He notes the inherent vulnerability of this first collection: “It’s not this definitive collection; you’re not going to walk away from the collection and say, ‘wow, I get it. Now I understand.’ For us, it’s more of an acknowledgment that there are all of these missing pieces that will eventually get built. These are mood-board images that we used to get here.”

Still, the designers don’t want to trivialize the city’s impact on their work. In discussing Lindbergh’s photo, they conclude that while it was shot in New York, its sophisticated mood could have been captured in another major city, citing Paris as an example. It’s on this topic only that any criticism of Karan’s DKNY is expressed — the notion that some of DKNY’s hometown imagery lacked sophistication. “I feel like, in the past, New York was a crutch,” Osborne says. “The city is there, the energy is there; just need to build on that…I was looking back and it was like, ‘oh, let’s use a yellow taxi.’ We want to be cultural participants instead of trying to take from the culture. It’s not like, ‘let’s shoot at the Empire State Building or Statue of Liberty because it’s easy. It’s not like, ‘let’s shoot this on top of a taxi cab where it’s like the most iconic thing you can think of in New York.”

As for the clothes, like most designers new to a house, Chow and Osborne keep mum on specifics, wanting to preserve the impact of that a-ha moment, the big reveal at their presentation, though Chow offers that, “without giving too much away,” they’ve spent considerable time looking at imagery from the late Eighties and early Nineties. But they don’t pretend that their aesthetic is fully resolved. “This season is really us getting adjusted, figuring out the culture, what the DNA is” he notes, “figuring that out and knowing that this is a journey.”

On one level, it’s a journey of separation and delineation as the designers negotiate the task of separating their DKNY from the clearly established codes of Public School. “One goal coming into DKNY is establishing those rules of this brand,” Chow says, “things we’ll always do; things we’ll never do.” While some crossover is inevitable — “Max and I are us and we’re human and like the things that we like” — the goal is to define “those rules both aesthetically and culturally that we want to be able to affect with DKNY.”

Among the changes they’re negotiating: the inherent differences in employment at a small company they own and a large one they work for. They’re learning the pleasure of having deep resources at their disposal, and the necessity of heightening their organizational prowess. They’ve also determined early on the necessity that all areas of the company — design, marketing, branding — work in tandem from a distinct singular message.

On their lists of don’ts: getting comfortable. Though Public School has a burgeoning women’s business, its foundation is in men’s. Asked if the designers have acquired an equal level of comfort in women’s and men’s, Osborne says yes — and no. “I don’t feel comfortable in men’s or women’s,” he offers. “To be honest, I feel it’s great not to feel so comfortable.”