The Portuguese designer beat eight other candidates with his sculptural gown incorporating leather and an interpretation of the brand’s logo. 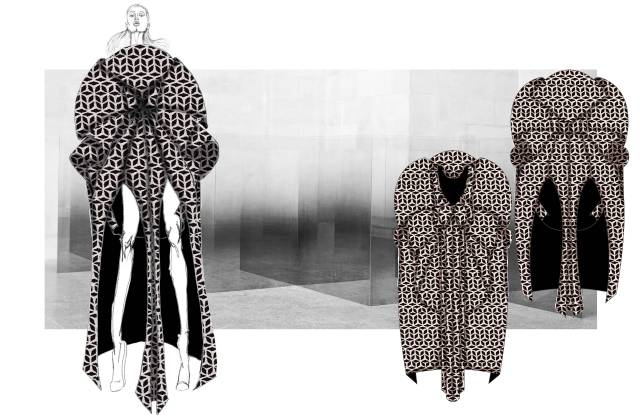 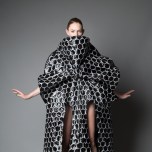 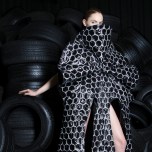 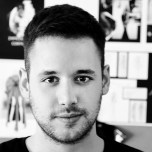 PARIS — Portuguese designer David Ferreira is the winner of the first Mercedes-Benz prize for young fashion talent. The designer, who trained at London’s University of Westminster, beat eight other young labels with his sculptural gown incorporating leather and an interpretation of the brand’s logo.

Ferreira wins 15,000 euros, or $16,841 at current exchange, as well as a year of support from the German carmaker, which has funded fashion weeks and projects for 20 years.

“I think it will open a lot of doors, and give visibility to my brand,” Ferreira said on Monday, soon after he learned the news, publicly announced at an event here Tuesday evening.

Ferreira completed his BA in Fashion Design at the University of Westminster in 2015, and has worked with designers including Iris van Herpen, Giles Deacon and Meadham Kirchhoff. Amanda Harlech and Nick Knight used one of his masks in a photo shoot last year, and the same mask has also been worn by Björk.

Initially, 30 candidates had each submitted sketches for three different designs inspired by the luxury carmaker’s codes, notably its star-shaped hood ornament. One design each from the nine finalists was selected by the jury to be turned into a prototype with financial help from the brand.

Ferreira created a black embroidered leather gown in the shape of a star featuring his interpretation of the brand’s logo. The designer, who so far sells his creations only to private clients, said he had never worked with leather before and had to learn to embroider it in order to complete the design.

“There were a lot of good designs, but in the end we were all in agreement on David Ferreira, who offered something that was quite comprehensive,” Mabille said. “The idea behind it is quite ingenious, it’s the idea of a woman sitting on the front of a Mercedes, with the wind lifting the dress up and turning it into a star. His construction was very good, which was important, too.”

“David stood out because his work could really be assimilated with haute couture, he was inspired by our logo and that was really visible on his design, you can understand the link to the brand instantly,” Tanguy said. “He did it in a beautiful way, he used beautiful materials, his dress is majestic.”

The other designers shortlisted for the prize were Charlie Le Mindu, Liselore Frowijn, Iris Cantabri, Quentin Véron, Carolina Ritzler, Céline Méteil, Coppélia Pique and Jour Ne. All nine’s creations will be on display at the MB Gallery on the Champs-Élysées until Nov. 6.

Mercedes is keen to show its support for fashion in new ways by supporting young creative talent, and plans for the competition to become an annual affair. It could also potentially be exported to other cities where the German firm has a presence during fashion events.

“Mercedes has been very involved with fashion for a long time on an international level, and we are a partner for several fashion weeks around the world,” Tanguy said. “We have partnered with the Fédération de la Haute Couture in Paris since 2008, but we really wanted to give a different amplitude to our partnership, not just to be considered the car provider for fashion week. We want to support young designers and offer them, thanks to all the partnerships Mercedes has in fashion, an international platform.”

Mercedes plans to aid the winners, for example, by offering them logistical support and potentially helping them to hold their own fashion shows in its partner cities, Tanguy said.

“We can’t compete with the big fashion prizes like LVMH, but we can use our fashion platform to help the designers,” she explained.