The business partners talked about how two British friends launched an American sportswear brand, how men’s fashion has evolved, and more. 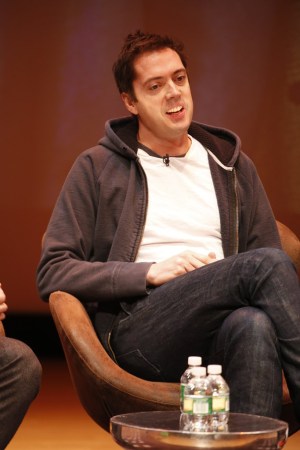 David Neville and Marcus Wainwright, Rag & Bone’s managing partners, believe their customer is not the type of guy who wants to wear flashy, overly aspirational and unrealistic clothing.

During a question-and-answer session, the business partners talked about how two British friends launched an American sportswear brand; how men’s fashion has evolved over the past 10 years; their methodical approach to building a luxury business, and why their strategy to tackle the American market first has benefitted the company. The duo were nominated last month for the CFDA Fashion Award for Menswear Designer of the Year.

Wainwright, whose father was a diplomat and who grew up all over the world, met Neville when they were 14 years old and were going to school together in England. Wainwright started a telecommunications company in England, but decided one day to stop doing that and packed his bags. He met a pretty girl on the beach and “she dragged me back to New York and we now have three kids,” said Wainwright. Neville was working in investment banking in England and had no fashion training. “I was always in love with New York City,” said Neville, noting that when he was in banking and working on transactions, he would come to New York. Once Wainwright moved to Manhattan, Neville decided to join him.

The partners spent about three years figuring out how to manufacture clothing. Wainwright said he wanted to make clothes for himself. “I couldn’t honestly find the perfect pair of jeans. Jeans at the time were washed and sandblasted, and I just wanted rigid, dark denim jeans,” he said, adding that he started visiting fabric shops on Broadway and knocking on doors in the Garment Center. Then “the learning experience began to snowball.”

Although they had the idea for a clothing company in 2001, they didn’t actually deliver any clothes until 2004. When they started out, there were very few people in this space. “There were bigger brands such as Ralph Lauren, but there was nothing between designer and high street,” said Wainwright. Rag & Bone offered three styles of pants, which retailed for $280 apiece. The closest pair of jeans was $140, and then there was Gucci for $500. “There was nothing in between,” he said.

That led them to a denim factory in Kentucky. “And that crystallized our point of view, that clothes had to be first and foremost about craftsmanship and authenticity,” said Wainwright. For a long period, it was only Neville and Wainwright working together, and the company had no infrastructure. They didn’t move into an office until mid-2006. That year, Andrew Rosen became their partner. “It’s been a blessing for us,” said Neville of Rosen’s involvement. “He gave us an awful lot of confidence to build our business, and he gave us the structure.” Now the company employs 300 people in its corporate office at 425 West 13th Street.

While Wainwright and Neville haven’t changed their style of dressing over the past 10 years, they agree that most men are dressing differently with lots more information available. “The way he’s digesting this information and where he’s getting his information has drastically changed,” said Wainwright. Neville believes that more women get fashion information from the Internet than men do. “I think men’s fashion is almost more brand driven than design driven,” he said, adding that he often sees celebrities wearing Rag & Bone, but most people wouldn’t know what label it was. Celebrities such as Carmelo Anthony and Justin Timberlake wear the clothes because “they like our sensibility and it doesn’t blast Rag & Bone on it. It’s beautiful clothes, nice fit and nice fabrics,” he said.

The duo have taken a wholesale approach to building the business. “We grew up as a wholesaler. We had to be. We didn’t have any money. We’re still very skewed as a wholesale business. The ability to scale the business here in America with U.S. retailers is actually significant,” said Neville. He said Barneys New York was the company’s biggest supporter in the early days. Today, Rag & Bone’s business is 70 percent wholesale, and 30 percent retail. In 2008, they opened a store in the West Village, which was the result of a meeting with Ralph Lauren in his office.

“Being in Ralph’s office was kind of surreal. His big advice for us was to open retail stores,” said Neville, even if they couldn’t afford it. They opened a store on Christopher Street, “and it was really good advice; we gave the customer an experience and it’s been huge for our brand,” he said.

At the company, Wainwright is in charge of design and seasonal inspiration, while Neville heads the business. “We share an office and we are driving the brand together,” said Wainwright. He believes the key to their success is understanding early on that the balance between art and commerce is critical. “If you want to have the luxury of doing a fashion show, at the end of the day you have to sell clothes to pay for it,” he said. “I would credit Andrew [Rosen] for highlighting that to us in the early days. It’s something a lot of designers need to realize sooner rather than later.”

Rosen also gave them the advice to concentrate on their business in America first. “If you can’t do business in Barneys, Bergdorf’s and Saks, you may as well pack up your business and go home,” said Neville. Eventually, they decided there were three overseas countries they thought they could sell: the U.K., Japan and South Korea. “We have freestanding stores and wholesale initiatives around that,” said Neville. In London, they have a freestanding store on Sloane Street and a wholesale business with Harvey Nichols, Selfridges and Harrods.

Wainwright couldn’t be specific about how big a business Rag & Bone could become in the next five years, but said: “We think we have a big opportunity to be the next big American brand.”

The strategy over the next few years is to build the brand, which now includes men’s wear, women’s wear, footwear, handbags and women’s jeans. They’re growing their digital initiatives over the next 12 to 18 months, in addition to expanding their fleet of 12 retail stores, opening in markets such as Brooklyn, Miami and San Francisco. “We have four to five stores scheduled to open. That’s really our focus,” said Neville.