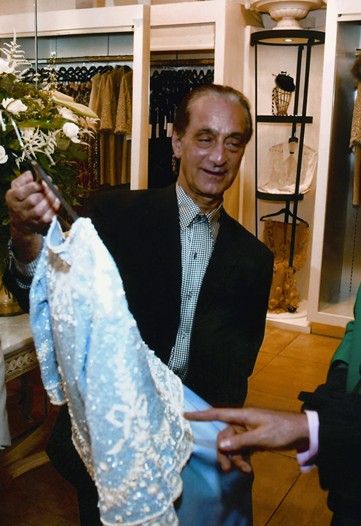 LONDON — There aren’t many designers who fondly recall the days when fashion was just another trade, and when the spotlight was on the client — rather than the talent. But David Sassoon, who’s still designing — and dishing — at age 76, is one of them.

The mischievous, self-deprecating designer famous for his elegant, embellished cocktail dresses and evening gowns, has been creating dresses for the British royal family and their aristocratic cousins for decades, and remembers clearly his first royal commission.

In 1960, he and his then-partner Belinda Bellville were asked to make a long dress for 10-year-old Princess Anne, who was to be a bridesmaid in the wedding of Lady Pamela Mountbatten to interior designer David Hicks. It turned out to be an unforgettable moment for a variety of reasons.

“I went to Buckingham Palace — through the tradesman’s entrance” along the side, recalled Sassoon with a giggle, sitting in the Bellville Sassoon shop on a quiet street off King’s Road here.

Once inside the nursery — with its ink-stained carpet — Sassoon recalls trying to bow to Queen Elizabeth II and accidentally stumbling into one of her corgis’ water bowls. “A liveried page appeared, wiped my shoes and the carpet, and left. This wasn’t exactly what I had planned for my first visit to the palace,” he said.

It was the first of several gaffes Sassoon would make in royal company as his career blossomed over the subsequent decades.

For example, Sassoon, who made more than 70 outfits for Princess Diana — including her cantaloupe-colored going-away outfit on her wedding day and her maternity wardrobe — recalls the moment he almost changed the course of history. It was during a fitting at Kensington Palace, when Sassoon threw open the door of the princess’ sitting room — and knocked over three-year-old Prince William. “Oh, my god, I’ve killed the future King of England,” he recalled thinking. In the end, the only damage was a bump on the royal forehead. (Sassoon recalled how he and his staff dubbed the young Lady Diana “Miss Buckingham” in order to keep paparazzo Richard Young, as well as Michael Roberts, who was then a stylist for Tatler, off her trail.)

The royal stories and a lot more feature in “The Glamour of Bellville Sassoon” (Antique Collectors Club), the designer’s look back at his 50 years in fashion. The book, which launches in January, has been coauthored by Sinty Stemp (a longtime assistant to another iconic British designer, the late Jean Muir), with a foreword by Suzy Menkes.

Given the longevity of his business, Sassoon is something of a rarity in British fashion.

The heyday of the couture house was in the Sixties and Seventies, when Bellville Sassoon designs were lauded worldwide and when Sassoon and Bellville were dressing royals like Princess Margaret, socialites including Camilla Shand — the future Duchess of Cornwall, and “It” girls Jean Shrimpton, Marisa Berenson and Penelope Tree.

Three decades later, it’s still a thriving business, although the firm has never advertised, gone into other categories such as fragrance or sold shares to a bigger investor. “This has always been a small, hands-on business, and we’ve run a tight ship. But if anyone does want to buy us out now, we’d be delighted,” said Sassoon.

He’s been running the company with designer Lorcan Mullany since Bellville retired in the early Eighties. The designer, who was born and raised in England in a Middle Eastern Sephardic Jewish family, said he’s always tried to make clothes that women want to buy, as well as evolve with the times.

“If he had been in Italy he would have been compared to Valentino,” said Zandra Rhodes, a longtime friend and colleague. “His detailing is original and immaculate, and he knows exactly how far to go in dressing for the most elegant of occasions,” she added, referring to his Chinese-themed dresses for Lady Amanda Harlech and his painted coats of the early Seventies.

“He is unassuming and shy and never blows his own trumpet. Sadly by being in the U.K., he has not had the publicity due to him. He is one of our best kept secrets,” said Rhodes.

Two years ago, Sassoon quit making couture. “No one has time for fittings — and the days of making whole wardrobes are over,” he said. He now focuses on ready-to-wear cocktail and evening dresses and does made-to-measure wedding gowns. The rtw label, known as Bellville Sassoon Lorcan Mullany, is currently stocked at stores including Harrods, Saks Fifth Avenue and Neiman Marcus.

Since 1965, the company has also been doing a roaring business with Vogue Patterns, and is currently the only British design house on the company’s books. And he’s proud to say the craft of home dressmaking is coming back, especially in the American Midwest.

It’s clear Sassoon has fun looking back, but he’s firmly rooted in the present, with clients including Blaine Trump, famed London divorce lawyer Fiona Shackleton, Shakira Caine and Kelly Brook. Trump, he admitted, is his favorite. “She’s not an Ivana — she’s a lady like Grace Kelly, a glamorous American girl who loves clothes and who looks great in them,” he said.

Princess Anne is also still a customer. In March, for the state banquet at Windsor Castle given in honor of French President Nicholas Sarkozy and his wife Carla Bruni Sarkozy, the princess wore Sassoon’s hand-embroidered Wedgwood blue jacket and matching skirt.

However, some things do change, even in the ultra-traditional world of royalty. Sassoon remembers returning to Buckingham Palace in the Eighties to dress Lady Sarah Ferguson, the Duchess of York. Twenty-plus years after his first palace visit, Sassoon, now an esteemed designer, zoomed right through the front gates.