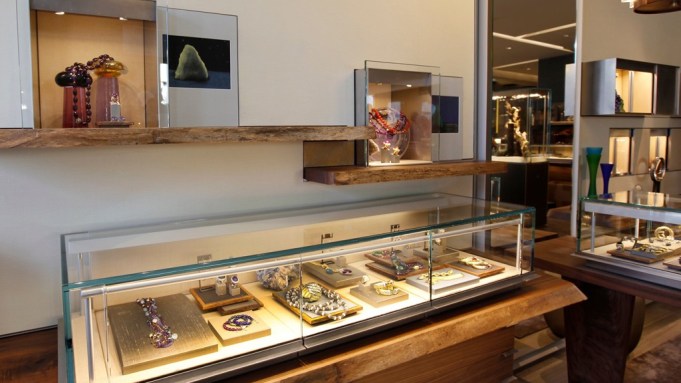 “The store is all about relaxed American luxury, which is perfect for California,” said Yurman, adding, “We think of ourselves as Californians even though I was born and raised in New York.” Yurman lived in the Golden State from age 19 to 25 when he minored in art at Santa Monica Community College and rode horses in Big Sur.

Architecture firm Gabellini Sheppard Associates conceptualized the 2,700-square-foot West Coast flagship, which is three times the size of the previous boutique, as an artist’s studio similar to the New York space where Yurman works.

The store features classically modern architecture, organic materials like walnut countertops and stone floors and, for the first time, Yurman and his wife Sybil’s own paintings and sculptures.

The 45-piece high-jewelry collection, which debuted last year, is priced from $10,000 to $1.2 million and is only available in Yurman’s New York studio and the Beverly Hills store.

Last week the brand hosted a slew of art benefits and a party Tuesday at its recently expanded South Coast Plaza store in Costa Mesa, which doubled in size to 2,400 square feet in February. A San Jose store is slated to open this fall.

Senk, nine weeks into his tenure as ceo, said, “I’d like to take credit for all of the recent developments.”

He described the switch from Urban Outfitters Inc., a company he worked at for nearly two decades, to fine jewelry as “like starting back in first grade — exciting, overwhelming, and fun to be put in a situation where there’s such a steep learning curve.”

Senk assured that there are no surprises up his sleeve. “What I’m doing here is not any sort of revolution,” he said. “It’s about taking the brilliance of what David and Sybil do and continuing to build it out. I’ve known them for a long time so if there are any surprises, it’s how good the good is.”

With 26 retail stores, worldwide distribution in 450 doors and retail sales topping $500 million, Senk said the plan is to expand the buys rather than the number of stores. “We’re very protective of our wholesale so I do not expect to see anything significant with respect to the number of doors.”

Instead, he plans to focus on the recent expansions in men’s watches and bridal, the two fastest-growing segments of the company.

“We’re very excited by the timepiece business, and we see ourselves as the only American luxury watch brand. There’s a real opportunity to capitalize on that,” said Senk. The brand will unveil a new sports watch at the Couture jewelry show in Las Vegas at the end of the month.

As for bridal, “It’s been a sleeper for us and our wholesale partners would be anxious for us to get more aggressive with it.”

The company does plan to harness social media to its advantage. “We could be doing more because there’s so much story there. It’s a question of pulling it together and finding the right medium,” said Senk. Yurman recently tweeted for the first time during the fall ad campaign shoot with Gisele Bündchen in Malibu.

While Yurman declined to give sales-per-square-foot estimates for the two California stores, Senk estimated the company’s productivity as “higher than anyone’s other than Apple.” The computer retailer has estimated sales per square foot of more than $2,000.