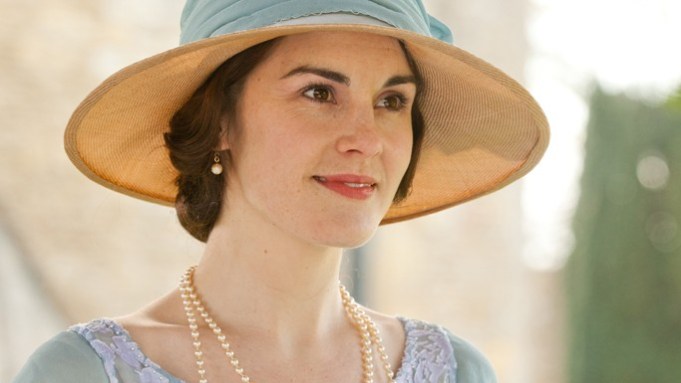 “Downton Abbey” is back on PBS. One of the most popular British period television costume dramas ever to be produced, it has become a huge hit worldwide, and the fourth season of the series made its debut on American television on Jan. 5. Now Winterthur, the Delaware house museum that was formerly the mansion of Henry Francis du Pont, has planned an interesting new show, “Costumes of Downton Abbey,” using clothes and accessories that have appeared on the program, chosen from the British firm Cosprop.

One aim of the Winterthur exhibition, which will open on March 1, is to compare country life in England and America during the first decades of the 20th century.

Estate historian Maggie Lidz, one of the three curators of the exhibition, says she made a point of choosing costumes from both the upstairs and the downstairs of the fictional Downton and the family of Earl and Countess Grantham.

Forty costumes and their coordinating accessories, ranging from Matthew Crawley’s white-tie turnout to Lady Sybil’s harem pants to Lady Edith’s wedding dress to Carson’s white-tie ensemble and Daisy’s dress for duty in the kitchen, will be shown in the Winterthur galleries. The show will be organized by time of day, and will include a working version of the Downton bell system. Du Pont’s Savile Row evening jacket and his family’s 1874 Tiffany silver service will also be on display.

“It is frankly a little problematic comparing a real-life American place with a fictional British place,” says Lidz, referring to an Oscar Wilde quote: “‘I love acting. It is so much more real than life.’” Then she reads a sentence that will be used in the upcoming exhibition. “We say, ‘The British liked American films, jazz and heiresses, and the Americans liked British accents, gin and tailoring.’” One scent that will be showcased will be that of Hu-Kwa tea, a smoky lapsang souchong imported by the firm Mark T. Wendell that was served at Winterthur throughout du Pont’s life there.

Before heading to England to pick costumes from Cosprop, Lidz made a list of what she and her colleagues wanted for the show. The harem pants were high on it. So were pieces worn by the servants. “Maids’ costumes changed between the morning and afternoon, and so did the footmen’s,” she notes. The height of staffing at Winterthur coincided with the height of staffing at English country houses like Downton, but there were trans-Atlantic distinctions. American central heating, for instance, dictated the weights of fabrics used in men’s suits. American men’s bodies were also distinct from Englishmen’s, Lidz observes: “Frankly, they had bigger butts.”

“One of the biggest differences was that, in the U.S., breakfast was usually served in the rooms,” the historian says. “You’d get a tray in the room, and you’d order it the night before.” This practice was so common that the collections at Winterthur include a parody menu, she notes. Another difference was the American affection for and interest in technology, and the upper-class British disdain of same. The bell system at Winterthur was electronic, and elevators were widely used throughout the 175-room house. “The one really interesting memoir that is explicit about that is by Lady Diana Cooper, the daughter of the Duke of Rutland, who was coming to the U.S. in the Twenties and Thirties,” Lidz says. “There was a distaste at the level of luxury and the mechanical up-to-dateness [in the United States].”

Du Pont was an important collector of European and American art, American furniture, objects and textiles, and he adapted Winterthur to showcase his collections. He also added administrative offices and conservation laboratories to the mansion.

“Each generation of du Ponts completely remade the house,” Lidz says. “But after World War II, Henry Francis du Pont knew that that whole world was gone.” Du Pont turned Winterthur into a house museum in 1951; he then went to live in a smaller dwelling on the property until his death in 1969. In reading his correspondence, Lidz was amused and charmed to see how pleased he was that members of the public were examining his collections. “He was detailing every day how many people would go through,” she says. “He really enjoyed the fact that things that he treasured were being enjoyed by a wider public.”