The Spanish brand will show during the New York collections for the first time. 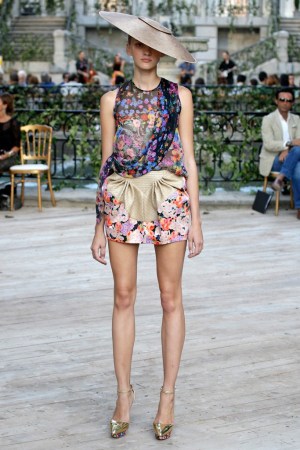 NEW YORK — Delpozo is planning to add a Spanish touch to the New York collections next month.

For the first time, the Madrid-based ready-to-wear brand will be part of New York Fashion Week with its fall show at Chelsea’s Canoe Studios on Feb. 10.

The decision to bring the collection Stateside was based on a larger relaunch strategy by the Perfumes & Diseño Group, which bought the brand last year after the death of founding designer Jesús del Pozo in 2011. The new parent hopes to put the Spanish brand on the global fashion map and is setting its sights on several strategic markets, including Europe, the U.S., Russia, Dubai and Shanghai.

“Delpozo already does very well in the perfumes area in the U.S.,” said creative director Josep Font, who joined Delpozo last year and is spearheading the evolution of the brand, which was founded in 1974. “We felt that showing Delpozo for the first time in New York will make it more international. We think New York is the best place for a global reach.”

Delpozo prides itself on its reverence of Spanish tradition, craftsmanship and couturelike details, and fall marks the second season designed by Font. While Delpozo already has a small retail presence here for spring — it is sold at 25 Park on the Upper East Side and at e-tailers Moda Operandi and Net-a-porter — the show will serve as a more formal introduction of the brand. Delpozo executives are hoping to return to New York Fashion Week each season. “We are here, and can be as international as anybody else,” Font said. “This will help show the world there is quality and there is fashion from Spain.”