There are signs that demand for luxury timepieces is picking up, even as the impact of the global recession drags on. 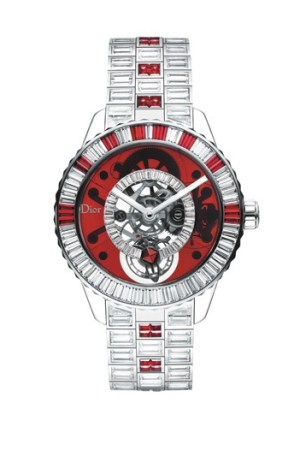 PARIS — It looks like the time is right again for watchmakers.

There are signs that demand for luxury timepieces is picking up, even as the impact of the global recession drags on.

“The mood is definitely positive and we are seeing encouraging signs ahead of the holiday season,” said Angelo Bonati, chief executive officer of sports watchmaker Officine Panerai, part of Switzerland’s Compagnie Financière Richemont SA. “We are hearing reports of traffic being up not only at our boutiques, but also at our retail partners.”

The industry’s largest players have already signaled that sales are beginning to rebound amid improving demand, suggesting that wealthy consumers are returning in the run-up to Christmas. Swatch Group AG said this month, sales measured in local currencies improved each month between August and October, and the company was gaining market share.

Swatch ceo Nicolas Hayek attributed the strong performance partly to the company’s broad portfolio, which comprises basic Swatch watches and high-end, handmade brands, such as Breguet. Higher demand also has been seen for watch parts from small independent watchmakers, which Swatch supplies through its Universo unit.

LVMH Moët Hennessy Louis Vuitton — owner of Tag Heuer, Hublot, Zenith and Chaumet — expects stronger demand for its watches this Christmas and is eyeing a return to growth in 2010, as retailers start replenishing their stocks, said Philippe Pascal, head of the company’s watch and jewelry unit.

Pascal made his comments at the inauguration of a new Hublot plant in Nyon, Switzerland, a 64,600-square-foot facility that will help the brand meet its target of producing 200,000 timepieces a year, reducing its reliance on parts suppliers.

“Last year, we were at the beginning of the crisis, so Christmas was gloomy, but I have great expectations for this year,” said Laurence Nicolas, ceo of LVMH-owned Dior Timepieces.

Like her competitors, Nicolas has noticed positive sales figures in the key U.S. market, which has responded well to the brand’s colorful timepieces, best known for combining Swiss craftsmanship with couture designs.

Richemont, which also owns Cartier, reported a 15 percent drop in first-half sales, but said the sales decline slowed to 10 percent in October, with demand in Asia, excluding Japan, rising 11 percent.

The improving mood among customers and retailers is a welcome respite for the industry from the turmoil of the first half of 2009, when the recession was at its worst.

After five years of strong growth, the watch industry saw demand for expensive timepieces collapse a year ago when consumers drastically cut spending on luxury items amid the deepening economic crisis, and retailers stopped replenishing their inventories.

The value of timepieces exported in October fell 22.7 percent to 1.3 billion Swiss francs, or $1.28 billion at current exchange rates, compared with a 26.1 percent drop reported in September. Exports to Hong Kong, the industry’s biggest market, slipped 18.3 percent, while demand in the U.S. fell 38.3 percent, but the pace of the decline slowed down compared with September. Smaller Asian markets, such as Singapore, Taiwan and South Korea, showed an increase in exports.

“It is still too soon to draw any significant conclusions from this, although the month of October did see more countries record an increase than previous months,” the Federation of the Swiss Watch Industry said.

The data also indicated trading down may be easing with the broader economic recovery. Watches priced at less than 200 Swiss francs, or $197.44, reported the steepest drop in international demand, down 37.2 percent in October. But at the other end of the price spectrum, exports of timepieces costing more than 3,000 Swiss francs, or $2,961, declined 22 percent, indicating that consumers are becoming more open to splurge when treating themselves to watch purchases.

Luxury watches were the hardest-hit category when the global financial crisis began, claiming the jobs and bonuses of its best customers: the high-earners working in the financial services industry.

“People continue to be cautious and there is still a mind-set against frivolous spending, but clients are more willing to spend on quality items than they were last year,” said Bonati. “After saving and cutting back for the last year, we are seeing people looking to reward themselves and enjoy the fruits of their hard labor.”

Citi analyst Thomas Chauvet, who expects the Swiss watch industry to grow 3 percent next year, said although trading down will continue, “it is unlikely to become a secular trend after the [recession] cycle.”

Dior’s Nicolas noted that timepieces with a special look could be more resistant to trading down or purchase delays.

“The decision to buy a Dior watch isn’t always a rational purchase, it’s more whimsical,” she said. “It’s not something you say ‘I will buy it in two years,’ because it’s not a classic Swiss look.”

Nevertheless, some watchmakers have expanded their ranges of more affordable products in a move to attract younger customers or those shopping for less expensive gifts.

In a similar move, Swiss watchmaker Ebel plans to target the children of its wealthy fortysomething customers with a line of more affordable watches that will be launched at the next Baselworld fair in 2010.