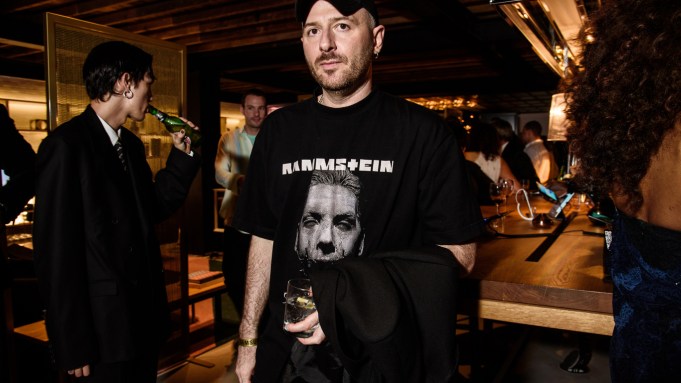 Demna Gvasalia, the Georgian designer who ignited the streetwear juggernaut in fashion, is stepping down from Vetements, the brand that sparked it — and also propelled him to the creative helm of Balenciaga in Paris.

“Vetements has always been a collective of creative minds. We will continue to push the boundaries even further, respecting codes and the authentic values of the brand, and keep on supporting honest creativity and genuine talent,” Demna’s brother Guram Gvasalia, cofounder and chief executive officer of the Zurich-based fashion house, said in a statement. “What Demna has accomplished over the past few years represents a key chapter in the story of Vetements. We are very grateful to Demna for having contributed to the great momentum of the house.”

Both brothers declined to elaborate beyond the statement, released exclusively to WWD over the weekend.

It is understood Demna Gvasalia will continue in his role as creative director of Balenciaga, which is scheduled to parade its spring 2020 show in Paris on Sept. 29, while the release hinted at additional projects, saying the designer, 38, is stepping down from his position at Vetements “to pursue new ventures.”

“Demna’s talent and vision of fashion have been fundamental in the continued success of Vetements. He has made an outstanding contribution to the company’s legacy and in writing the codes of the brand,” the statement added.

For his part, the designer said: “I started Vetements because I was bored of fashion and against all odds fashion did change once and forever since Vetements appeared and it also opened a new door for so many. So I feel that I have accomplished my mission of a conceptualist and design innovator at this exceptional brand and Vetements has matured into a company that can evolve its creative heritage into a new chapter on its own.”

To be sure, Gvasalia brought something fresh, raw and exhilarating when he staged the Vetements fall 2015 show in Paris, sending models hurtling through the basement dark rooms of notorious gay sex club Le Depot in fireman polos, supersize trenchcoats and hoodies as the likes of Kanye West and Jared Leto looked on.

Soon his extra-long sleeves and monster shoulders were all over the runways, and $800 hoodies with wry slogans or logos became covetable items for sneaker heads and fashionistas alike.

With its wacky show venues — a grubby Chinese restaurant one season, flea market stalls the next — oversize silhouettes, hardcore proclivities and Eastern European aesthetic, Vetements quickly became a byword for an impassive, alternative brand of cool.

What’s more, Gvasalia innovated in fashion by draining collections of seasonal themes; gleefully and openly appropriating signposts of consumer culture; taking a sociological approach to analyzing what triggers consumer desire, and stretching the boundaries of what is considered luxurious and chic.

He also upended multiple industry conventions: staging runway shows during men’s and couture fashion weeks, or sometimes not at all; casting unconventional models and amateurs, mostly found on Instagram; inviting ordinary people with meager followings, not influencers, to help construct the Vetements image, and teaming with an array of brands with special manufacturing expertise, from Alpha Industries for bomber jackets to Juicy Couture for tracksuits.

With his black fingernails and facial scruff, Gvasalia was also seen as a ringleader for all things underground and alternative, exalting the grittier elements of Paris in his collections, along with jolts of S&M and punk, seen in kinky face hoods and spiky sunglasses.

While not a direct-to-consumer brand, Vetements leveraged the power of the Internet — particularly Instagram, where it has 3.5 million followers — to fan its notoriety, and powerful e-tailers like Net-a-porter, Matchesfashion.com and Ssense to anchor its wholesale-driven business model.

In a 2017 interview with WWD, Guram Gvasalia said, “my top five e-stores represent about half of my business. The dimensions of the orders and the dimensions of the merchandise you can sell online, it’s insane. The main stores are in big cities and now there are so many people outside of main cities that are starting to be aware of fashion.”

Yet the departure of Demna Gvasalia raises questions about how Vetements will maintain its cachet without its star thinker, who cultivated his design chops at Maison Margiela and Louis Vuitton.

Guram Gvasalia hinted at an array of positive vectors for the brand.

“This moment signifies a new era for Vetements, an era of growth and major expansion. New projects and surprise collaborations are to be revealed in the very near future,” he said, without evaluating further.

While surprising, Demna Gvasalia’s exit fits an industry trend for briefer tenures at major fashion brands, and what seems to be greater elasticity in brand image.

The spring 2020 Vetements collection, paraded at the McDonalds on the Champs-Élysées during men’s fashion week last June, pointed to a more sophisticated path for the brand, expressed in purposely wrinkled pin-striped suits for both sexes that can roll up in a suitcase, for example, or easy T-shirt dresses with an unstudied, sexy cool.

Read More: Demna Gvasalia on Appropriation, ‘Ugly’ Sneakers and the Curse of Pre-collections

The brand, along with others associated with the streetwear boom, has lost some of its heat as fashion has shifted to a dressier look for men and women hinged on tailoring and polished casualwear. Vetements ranked ninth on the Lyst Index ranking of the hottest brands in the first quarter of 2019, ahead of Saint Laurent, but behind Off-White, Gucci, Balenciaga, Valentino, Fendi, Prada, Stone Island and Versace, first to eighth respectively.

While he never came out for a bow at the end of a Vetements show, Demna Gvasalia was instrumental to Vetements, named after the French word for clothes and signaling a garment-based approach to fashion.

Guram Gvasalia boasted in the 2017 interview that he paid his brother as much at Vetements as he was earning at Balenciaga. “I think it’s actually more. He has two jobs, but I don’t want him to have any priorities,” he said. We split in the middle [with Balenciaga] and we each get him for two-and-a-half days. It’s the same amount of work he’s doing and psychologically, for the same amount of work you should get paid the same and then you take care of it the same.

And Vetements, established in the French capital, in 2017 moved all operations to Zurich, partly at the behest of the designer, who sought a calmer lifestyle and installed himself on the wooded edge of the Swiss city.

In an interview earlier this year with WWD, Demna Gvasalia said he had a clearer sense of his design identity.

“Oversize, it’s my territory,” he said. “I definitely intend to defend what is my design territory.”

Born in Georgia, Gvasalia studied international economics at Tbilisi State University before he enrolled in Antwerp’s Royal Academy of Fine Arts, which spawned the original Antwerp Six in the early Eighties. He graduated with a master’s degree in fashion design in 2006, later that year collaborating with Walter van Beirendonck, one of the Six, on his men’s collections.

He joined Margiela in 2009 after the maverick Belgian founder retired, and was responsible for the women’s collections. In 2013, he moved over to Louis Vuitton, where he was senior designer of women’s ready-to-wear collections, initially under Marc Jacobs and briefly under Nicolas Ghesquière. But it was his Vetements project — billed as a creative collective from the start — that thrust him onto the international radar.

What’s Next for Demna Gvasalia?

Demna Gvasalia Plays By His Own Rules