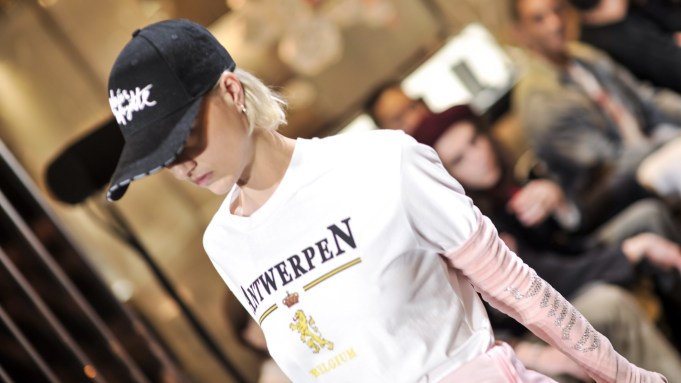 After five years Demna Gvasalia is stepping down from Vetements, the brand that sparked the streetwear juggernaut in fashion — and also propelled him to the creative helm of Balenciaga in Paris.

Gvasalia brought something fresh, raw and exhilarating to the scene, like when he staged the fall 2015 show for Vetements in Paris, sending models hurtling through the basement dark rooms of notorious gay sex club Le Dépôt in fireman polos, supersize trenchcoats and hoodies as the likes of Kanye West and Jared Leto looked on.

Soon his extra-long sleeves and monster shoulders were all over the runways, and $800 hoodies with wry slogans or logos became covetable items for sneaker heads and fashionistas alike.

As it’s confirmed that Demna Gvasalia is set to depart from the label he cofounded, WWD recaps the most memorable moments that will define his legacy at Vetements. From DHL T-shirts to lighter-heel boots, these were his top 10 moments.

Lotta Volkova opened Vetements’ first show at Paris Fashion Week, for spring 2015. The Russian stylist, one of Gvasalia’s key collaborators, is part of a cadre of creative types from Eastern Europe that has caught the attention of the fashion world with a raw, underground aesthetic shaped by the experience of growing up after the collapse of the Soviet Union.

At Vetements, she not only had a hand in the casting and styling, but also acted as a creative catalyst for Gvasalia, who described her as one of his best friends.

In an interview with WWD in 2015, he stopped short of calling her a muse. “She is very versatile in the way she’s dressing,” he said at the time. “She’s more of an interface for me, like I need somehow a woman to talk about the clothes and to get the very subjective feminine opinion about things.”

Reviewing the spring 2015 show, WWD noted that the collection “had just the right doses of sexiness and cool.”

Demna Gvasalia’s DHL T-shirt for Vetements, famously modeled by Russian designer Gosha Rubchinskiy at the spring 2016 show, sparked a maelstrom of indignation in the mainstream media given its $300 price tag: It was derided variously as anti-fashion, a scam and a subversion.

In an interview with WWD, Gvasalia contended it wasn’t even strictly appropriation. “It was just a joke actually,” he said. “But I don’t usually joke when I make fashion. I’m really serious about making clothing.”

Vetements’ straight-leg, high-rise style made from secondhand denim was first introduced in fall 2014 as part of the brand’s debut collection, but its popularity skyrocketed after Vetements’ fall 2015 show, held at the notorious gay sex club Le Dépôt in Paris.

The reworked jeans are made from two vintage pairs, which are cut along the seams and stitched together. The style constantly sold out on all major e-tailers.

Couture, Then Men’s, Then Couture Again

In 2016, Vetements was among the brands elected as new guest members to the couture calendar in Paris. For his show, Gvasalia hijacked the designer floor of Galeries Lafayette while the giant department store was still open for business. The designer conscripted 18 brands to collaborate on his collection, from Levi’s and Carhartt to Mackintosh and Comme des Garçons Shirt.

The following year, amid runway overload, Vetements nixed its Paris show. “There are simply just too many shows. I find it a little bit insane,” said Guram Gvasalia, chief executive officer of Vetements and the designer’s brother.

For the fall 2018 season, Vetements joined Men’s Fashion Week in the French capital.

Finally, Vetements reverted back to Couture Week, where it has been showing its co-ed collections for the past two seasons.

Manolo Blahnik’s Hangisi shoes were thrust into the spotlight at the Vetements spring 2017 show during the Paris Couture. Blahnik was one of 18 brands working with Vetements that season, including Levi’s, Brioni and Juicy Couture.

Gvasalia made a series of tweaks to the Manolo classic, removing the Hangisi’s sparkly signature buckle and transforming the satin shoes into a slingback, a court style, ankle boots and thigh highs. Working alongside Blahnik, Gvasalia also deconstructed the shoes, giving them frayed edges and unfinished closings as if scissors have been taken to them.

“I am excited about collaborating with Vetements,” Blahnik said. “I think it is of the moment to mix different brands and wear them the way you want. I like the freedom of that — fashion shows have become so boring — hence why I was intrigued and said yes when they approached me.”

Perhaps one of the key signature products, the lighter-heel boots have had countless iterations and continue to be ubiquitous among street style stars everywhere.

Back in 2016, Vetements released a $770 cigarette case made from “galvanized brass” that sparked controversy over its price point. In addition, the brand has released a brass lighter cover for $345 and a brass grinder for $750.

In 2017, Gvasalia and his brother Guram, chief executive officer of Vetements, moved the company to Zurich from Paris, underlining that a new chapter had opened based more on “pragmatic dressing” rather than the decorative, glamorous or thematic approach many designers take.

For its “No-Show” event, held in a car park, Gvasalia presented looks from his spring 2018 collection shot on locals in Zurich.

Vetements gained cult status also thanks to the celebrities who have been attending its shows and sported its items. They range from Kanye West and Travis Scott, who attended the brand’s second fashion show in Paris, to Gigi Hadid, and even Celine Dion, who was photographed wearing the “I love Paris Hilton” T-shirt at the most recent Couture Week.

The Unpolished Side of Paris

From a dry cleaner to a McDonald’s, the sets of Vetements’ shows and events were always a key part of the brand’s image.

Gvasalia said in an interview how he aimed to show “the unpolished side of Paris,” being it the basement darkrooms of seedy gay club Le Dépôt or a sprawling Chinese restaurant in Belleville.

In 2018, Gvasalia went back to his origins, so to speak, when he introduced a formal collaboration with DHL, the Vetements x DHL Capsule Collection, which was presented at the DHL Hub in Leipzig, Germany.

Why Demna Gvasalia Is Leaving Vetements

Demna Gvasalia on Appropriation, ‘Ugly’ Sneakers and the Curse of Pre-collections