The designer has upped the ante by relocating a few blocks north to a 10,500-square-foot space. 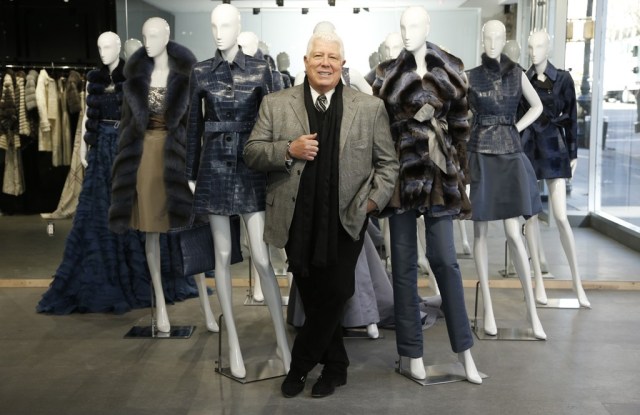 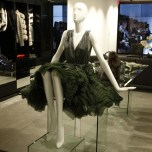 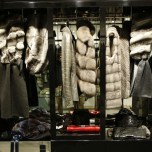 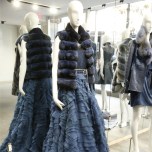 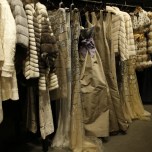 NEW YORK — Having had a Madison Avenue store here for the past 10 of the 30 years he has been in business, Dennis Basso has upped the ante by relocating a few blocks north to a 10,500-square-foot space.

Over the weekend, the designer quietly opened the doors to 825 Madison Avenue. While a shopper browsed through the fur jackets, sequined eveningwear and crocodile clutches on the first floor on Monday morning, a crew of contractors was busy plastering and hammering the three floors above. During a walk-through — which at times was a bit precarious — Basso motioned toward what he described as a floating glass staircase, an expansive area for his first mink-covered midcentury furniture and a residential-type, fourth-floor office with a Juliet balcony. “It’s going to be like a mini Dennis Basso department store,” he said. “Being a true salesman, the dressing rooms are already in.”

With a 15-year lease that will be nearly a $3 million commitment in rent this year, Basso is far from winding down his career. “Most people would be looking to ease up after 30 years in business, but I have never felt more excited,” he said. “I always say that when you are doing something that you love, it’s not work. When I moved to Madison Avenue 10 years ago, I thought that was the pinnacle of my business career. Now here I am in a space three times the size with an expanded accessories line.”

His wholesale showroom will be housed on the fourth floor, and on-site seamstresses were sewing away in what will be an atelier, which he noted was uncommon for the neighborhood, “very much like Paris in the Fifties,” said Basso, adding that an attendant will always be at the ready with silver-tray espresso service for shoppers. “We’re back to customers really wanting to be treated like customers again. When customers are treated well, they really want to return to that store, or maybe even call before to see if that salesperson is working,” he said.

Basso has enlisted four architectural and interior specialists to design the landmark building, which previously was occupied by a Dolce & Gabbana store. Sawicki Tarella is handling the historic facade, John Lindell is taking care of the interior and Kenneth Alpert will handle the interior design of the offices. Alpert has created all of Basso’s homes. Each of the three sales floors will have dark gray slate floors and glass walls so that the emphasis is on the clothes, and the first floor features screens playing runway show footage. The boutique also has 30 feet of frontage on Madison Avenue.

The new monochromatic contemporary layout should help boost 2014 sales by 10 percent, according to Basso, who is predicting a 6 percent gain this year. The midcentury home furnishings, blankets and throws — something Basso has done on a customized basis for interior designers in the past — will now be offered to shoppers.

Having introduced ready-to-wear six years ago, which now includes resort and pre-fall, the designer plans to introduce more daytime pieces. A bridge line for department stores and specialty stores is also in the works potentially for next year, but Basso was quick to note “not a navy blazer because you don’t need to come to Dennis Basso for a navy blazer.” (Retail prices would range from about $150 to $500.)

The boutique will be open seven days a week through the holidays, and its grand opening party is set for Dec. 10. While 16 staffers are based in the uptown location, the company also has a 30,000-square-foot facility in Long Island City that is used for a design studio and manufacturing. With five other boutiques and concept shops, the designer is still getting used to his new Madison Avenue address. “This location is significant to where the Dennis Basso brand is going,” he said. “Let’s put it this way: The day I went into business in 1983, I did not imagine having a store next to Dolce & Gabbana and Valentino a door away.”