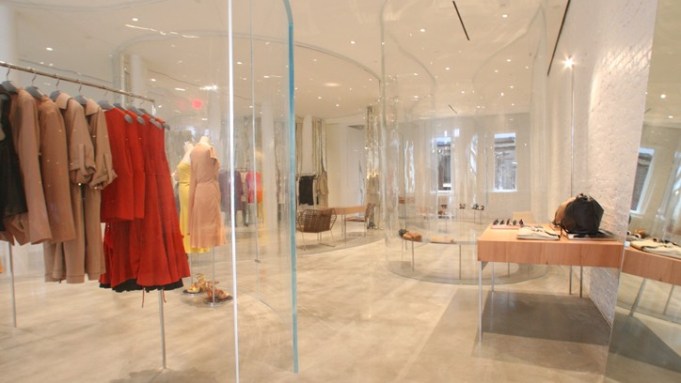 Curved walls made from clear acrylic — the same kind used to build gigantic aquariums — delineate space for each of Lam’s collections at the 2,800-square-foot store, which is at 10-12 Crosby Street in SoHo here.

Kazuyo Sejima and Ryue Nishizawa of Tokyo-based SANAA designed the store, Lam’s first. It is estimated to do $2.4 million in the first year, according to industry sources.

SANAA’s work for the New Museum has been critically acclaimed and the duo is working on an extension to the Musée du Louvre in Lens, France. “I scribbled what I wanted on a napkin during a flight to Tokyo to meet with them,” Lam said. “I wrote the words ‘mystery, lightness and sensuality.’”

The acrylic rooms look like glass bubbles, buoyant and delicate, and house Lam’s resort and spring pre-collections, knitwear and eveningwear, and shoes and handbags. A small leather goods collection, which was designed for the store, will be expanded for fall.

“The store gives us the opportunity to explore different categories, such as beach, jewelry and even a scent,” Lam said. “We’ll do more eveningwear. We’re going to do custom-made clothing. It’s all in the works. There are endless possibilities.”

Lam chose the location, on the eastern edge of SoHo, because it’s a bit out of the way. “I’m going to be in the company of Ted Muehling, antiques specialist De Vera, custom furniture store BDDW and Jil Sander,” he said. “Across the street there will be an outdoor garden for the Mondrian Hotel. I really wanted to respect the neighborhood. I don’t want to turn it into another Bleecker Street.”

The architects had some constraints, such as incorporating the existing columns into the design of the space, which was formerly a factory and later an actors’ studio. Decoration is kept to a minimum with a concrete floor and the original brick walls painted white. Chairs from a range of periods from Lam’s own collection punctuate the acrylic rooms. The only color comes from the clothes and the theatrical gold and silver woven drapes that move on runners and give privacy to the dressing rooms.

A VIP area with its own fitting room has a separate entrance from the street. At a party to welcome the new store on Wednesday night, Lam proved the VIP area won’t go to waste when Rihanna arrived. “She picked my favorite look from spring!” enthused Lam as the songstress braved a barrage of photographers. “I’m going to try to show her around, but she’s so surrounded by fans.”

The two made their way back towards the dressing rooms, where she admired the store’s futuristic design. “I want this to be my house,” said Rihanna who was sporting new blond hair streaks.

While the store is new, the sales associates are seasoned. Lam hired “a great team from Linda Dresner,” the iconic Park Avenue luxury retailer that closed in November. “They have books and bring clients with them. It’s about going to customers.”

The designer plans to move his office and studio from the Starrett-Lehigh Building to Crosby Street as soon as the space is finished. “I like the European model of a store and the designer’s atelier,” Lam said. “It’s like a [real] fashion house.”