The fashion house has commissioned two Berlin-based artists to create an installation at the fair that uses old pianos, furniture and scraps of Fendi leather. 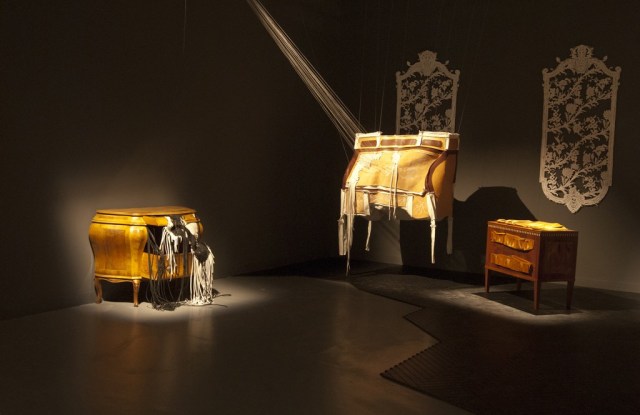 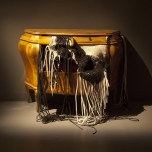 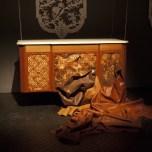 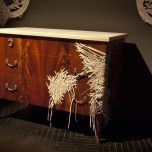 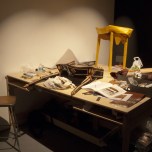 A giant parking lot in downtown Miami, wedged between a convention center and a series of low-slung apartment complexes, is an unlikely spot to find a little piece of Rome — Fendi’s headquarters, to be exact. But it’s nearly the first week of December in this sunny city and that mash-up of Old World and New could only be the result of one catalyst: Design Miami, the annual fair that Fendi has sponsored for the past three years.

For the uninitiated, Design Miami is the applied-arts exposition that opens with a preview today and runs parallel to the neighboring Art Basel. And since 2008, when she struck up a friendship with co-founder and then-director Ambra Medda, Silvia Fendi has been a very visible presence at the show, sponsoring panel discussions, musical performances (with fur-covered Gibson guitars, naturally) and on-site performance installations. This time, Fendi says, “We really wanted something that would show our roots.” So she brought the spirit of Palazzo Fendi to Miami, with a little help from two emerging artists from Berlin, Elisa Strozyk and Sebastian Neeb.

“It’s about metamorphosis,” says Strozyk, 29, of their “Craft Alchemy” installation, located within the Design Miami tents, just left of the entrance. “It’s about different stages, wood and leather, leather and wood.” About a quarter of the space is staged atelierlike, where Strozyk and Neeb, 31, will continue to work; the rest, like a gallery. The latter is the sort of scene that might occur if Salvador Dalí’s half-melted figures were cast in the broomstick sequence of “Fantasia.” But here, it’s the couple’s wooden baroque cabinets — some with intricately knotted appendages and fringe spilling out from drawers, others looking deflated and not quite right. Strozyk points to one in particular that’s suspended, hovering like a ghost, from the ceiling. It’s an exact replica of a similar roll-top drawer in Berlin’s Museum of Decorative Arts — except it’s made entirely of discarded Fendi leather.

Like the house’s previous “Craft” and “Fatto a Mano” series, as well as the inaugural “Craft Punk” in 2009 that was tied to Milan’s Salone del Mobile, Fendi supplied the artists with leftover leathers, mostly from the Selleria line, giving them carte blanche to make anything they chose.

“We’re quite into woodworking and antique furniture,” says Strozyk, who’s known for her textiles and rugs crafted from very thin slices of wood mounted on fabric. “And Sebastian is a big fan of wood inlays and the old cabinetmaking. We thought, let’s have a closer look at these two crafts, the combination of wood and leather.”

Earlier this year, the couple collaborated on a cabinet with an accordionlike exterior for Imm Cologne, the international furnishings show, so, as Strozyk notes, they were already in a furniture state of mind.

“Their technique and sensibility match with our identity,” says Fendi, “as we both see experimentation as something that pushes the boundaries forward.” It was Fendi who suggested they connect that idea to Palazzo Fendi, and from there, “The inspirations ping-ponged,” says Strozyk, noting that the installation’s herringbone parquet flooring and the wall’s paper stencil frames are elements borrowed directly from the house’s headquarters.

“Then we said, ‘OK, let’s imagine that there’s one room at Palazzo Fendi that’s been sealed for 300 years,’” continues Neeb. “And when Fendi moved there in 2005, its spirit went into the room and seeped into the furniture.”

“Craft Alchemy” is the next chapter. Each piece (there are now eight of them but the artists will create more throughout the show’s five-day run) works off of that fantastical narrative. One cabinet has bulges of leather bursting at its edges — “the idea is that it’s puffing its way out,” explains Neeb. Another sports patches of erratically woven leather. “It’s attacking the furniture, becoming a part of it,” he adds. In what might be unfortunate news to big spenders, the showcase is not for sale. The Fendi Foundation for Limited Edition Design plans to stage an exhibit in Rome next year featuring all of its one-of-a-kind Design Miami and Fatto a Mano for the Future collaborations.

Aside from a curvy baroque dresser that they bought on eBay for about $465, the duo handcrafted everything in the installation (even the “marble” counter tops, which are actually brushed wood), modeling the pieces after those by the 18th century German cabinetmakers Abraham and David Roentgen, who had clients including Marie Antoinette and Empress Catherine. “It was a family company — father and son,” Neeb says. “Like Fendi.”

Also, very “like Fendi” is Design Miami’s Collectors Lounge, hosted for the first time this year by the Italian brand. Strozyk and Neeb had a hand in the decor, most noticeably in the numerous old legless pianos, which they scavenged from a piano graveyard in Miami. The wood is tarnished and the keys are peeled back, but on the comfy side, their tops are lined with herringbone-patterned leather cushions — also crafted by the artists. “We thought it would be nice to have them on the floor, so people could sit since this is a salon,” says Strozyk.

Their inspiration for the space was a photo of the reception hall at Palazzo Fendi, with the caption “piano nobile” inscribed on it. After all, piano in Italian means floor.